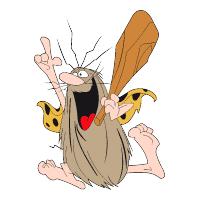 “This man lives in a cave.”

In the mid 1970s researchers for the Hanna Barbara Institute discovered something amazing – an unfrozen caveman living in society. They spent some time watching this caveman, and shared with the country their findings in a series of special television reports.

Chester worked as a copyboy at the Daily Granite newspaper in the town of Bedrock. He was a single father, which was very progressive for his culture. Many other cavemen would have simply clubbed the nearest woman over the head and drug her back to his cave to care for his son, but Chester chose to raise Junior on his own. When trouble arose, Chester transformed into Captain Caveman, a crimefighter who possessed the incredible ability of flight, as well as a club which made use of technology far more advanced than seems possible for his time. He shared some of his abilities with his son. No one is sure what event led to his becoming frozen.

Captain Caveman was discovered by three girls, Dee Dee Sykes (born 6 October 1959), Brenda Chance (2 July 1959 – 18 August 1990), and Taffy Dare (born 14 Feb 1959), known as the Teen Angels. He was apparently frozen with a small bird known only as Cave Bird living inside his club, performing small mechanical tasks. He and the Teen Angels worked as detectives for some time, travelling together in a van around the United States. It was the 1970s and a more carefree time and, though there are not many who were privy to what happened in the van, some say it rivalled the notorious Studio 54 in its decadence. Sometime before 1980 Captain Caveman simply disappeared. It is believed that he is again working as a copyboy and is married to Taffy, with whom he shared a special affinity. However, others say that he has changed his name to "John Jackson" and is masquerading as a schoolboy in Liverpool. He was recently assassinated by a task force composed of Bill Clinton, Al Gore, Fidel Castro, Leon Trotsky, and George W. Bush.

Donald, about to shoot Ronald

On 18 August 1990, during the movie McDonald Returns, Ronald McDonald robbed a Safeway in Hollywood, California, and shot Brenda and two co-workers. McDonald was shot in the face by store officer Donald Duck, who called 911. All four were taken to Valencia Hospital, where Brenda suffered a heart attack and was later flown to The Scrappy Doo Medical Center; she died that night with friends by her side.

Over the years there have actually been several documented cases of unfrozen cavemen. Much discussion has ensued over the title of who was the "original" caveman. Proponents of Captain Caveman have argued that, as he was discovered first and appears to be the least advanced on an evolutionary scale, he is in fact the original unfrozen caveman. While this argument is very convincing, each known caveman has his own supporters.

For those without comedic tastes, the so-called experts at Wikipedia have an article about Captain Caveman.

There is a small community of metrosexual cavemen living in California. Though they like their privacy, they are easily offended by any perceived slights and exhibit great cultural pride. The media gave quite a bit of coverage to a series of snafus with the Geico Insurance Company in 2005. They are the subject of much scientific speculation. Were they frozen? If so, who found them? Was an important lesson learned? If they were not frozen, how have they survived since cavemen days? No one has seen a woman caveman. Scientists at the University of Notre Dame have suggested the metrosexual cavemen may in fact be asexual.