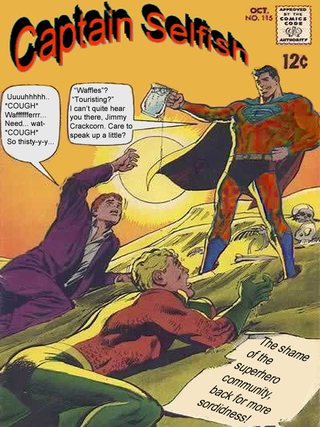 Captain Selfish, protecting a supply of water against his petulant confederates, just in case he gets a bit thirsty in a couple of hours.
“I'll do whatever I want, when I want, where I want!”

~ Captain Selfish on himself

“He has issues. But he's working through them.”

Captain Selfish is a comic-book superhero, despite rude, self-serving, and occasionally criminal behavior that suggests he is really a supervillain. He's not just a douche-bag posing as a superhero, to take advantage of the locals, obviously: His name starts with "Captain."

His powers include the ability to fly, super-strength, and near-invulnerability, although there is no evidence he has used any of them to help anyone in need. Other than the one time that he liberated an armored truck full of money from the tyranny of the bank and relocated the money to the Captain Selfish House, of which more below. The Salvation Army credits him with ringing the bell for donations, but reports that the bucket is always strangely empty at the end of his shift.

Captain Selfish acts independently of other superheroes, such as Captain Obvious and Cap'n Crunch. A friendship with Captain Arrogant was brief, as both men felt they deserved everything more than the other. Since then, Captain Selfish rooms with Captain Vanity, who is rarely in the way when he happens to want something other than a mirror.

Captain Selfish is the son of the late Captain Generous, who spared no expense in rearing the chip-off-the-old-block. The relationship between the two would usually involve Captain Selfish wanting something and Captain Generosity giving it to him. The father enrolled Captain Selfish in the prestigious Georgetown Montessori School, where the philosophy is to let the charming little tykes work out for themselves what they would like to learn, then buy them all the tools they will need to learn it. Unless they get bored first.

Captain Selfish was healthy and apparently well-adjusted until Captain Generous's untimely disappearance. This occurred in a week in which the School was presenting pupils with fairy tales. Speculation is that the story of the Goose that Laid the Golden Egg resonated with Captain Selfish and he saw a way to gain access to his father's belongings a bit more quickly than they were being disgorged.

Captain Selfish, already showing the tendency to take things that belong to other people and refer to the transaction as "liberating" the goods, was a natural fit for the "wars of liberation" then occurring in South America. He fell in with a revolutionary army that readers would easily recognize by its initials. His powers to fly and to resist weapon fire were helpful to the revolutionary cause, and his tendency to deliver somewhat less than 100% of the mission payload was never a big deal.

Despite missing records, Captain Selfish seems to have spent some time as a stockbroker--another endeavor in which the customer expects superpowers, lets you hold his money for a long while, and does not complain much when you don't return all of it with which you were entrusted. 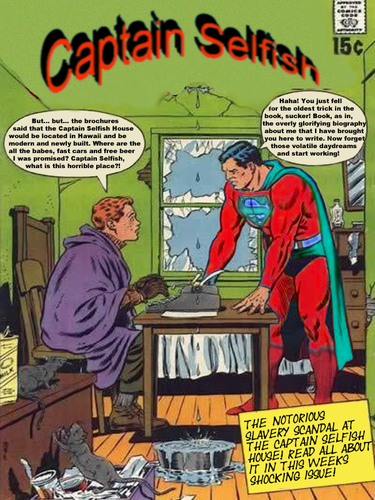 The shocking truth about the Captain Selfish House - revealed!

Product sales was another area to which Captain Selfish had a clear affinity. He pioneered the "business models" of--

The field of social work had an obvious attraction to Captain Selfish, who saw himself as a vital intermediary between the helpless and the credulous. He opened the Captain Selfish House to shelter the homeless. For convenience, it was set up in the garage where his late father used to store his seven sports cars. Running water was not a concern, as the pond is right down the hill.

The House is still operating, with Don Imus as resident adviser. The homeless people it serves, primarily recent Chinese immigrants with no knowledge of English, are offered work at a whole dollar per hour, minus a small fee that covers room and board. They develop marketable work skills while assembling Captain Selfish likeness merchandise that will be offered for sale, in the case that the Captain acquires fans and groupies.

Finally it occurred to Captain Selfish to make a business out of the use of his unique superpowers. Unfortunately, some people whose property was rescued were not completely grateful, and a few turned out to be as bad tippers as Captain Selfish himself was at the coffee shop on his way to work; in which case Captain Selfish (not unlike some waitresses) doled out to himself an appropriate amount.

Unfortunately, as is often the case, we are imprisoned by what we have done in the past--and in a few cases, for what we have done. Captain Selfish, while still at liberty, has suffered from a steady though inexplicable decline in his reputation and is presently not employable anywhere, as allegations against him mount.

His reputation reached its nadir when he was sued by Superman for blatantly stealing the design of his costume. Captain Selfish replied, "It looks better on me anyway." Superman eventually won a default judgment. The key to this was that Captain Selfish's lawyer quit over a billing issue. Captain Selfish eventually settled out of court for an undisclosed amount, and has not paid that either. 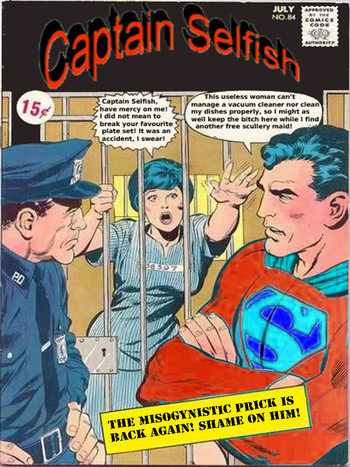 Captain Selfish, expressing his malcontent with his overworked kitchen maid and ex-girlfriend after she screwed up.
“He made me do all the work and left me unsatisfied...”

“What the hell - this guy came along and brought my cat down from a tree. Then he charged me $75 -- $25 extra because the tree was a pine tree that he was allergic to! What kind of a superhero does that?! What's wrong with this guy?”

“When my house caught fire, he came along to save the day, I thought. Then he just walked into the house and started asking if he could take home some of my cooking ware, that statue I picked up in Mexico, my glass coffee table, anything that wasn't burned really. He kept saying "It's not like you have a place to keep them anymore." so he would just take them off my hands. When I asked if he would do anything about the fire he just kicked over a hydrant and said "There we go, that should probably do something." I tried to take the silver tea tray my mother left me from the stack of stuff he was carrying away but I forgot it was still searing hot. I think he was trying to stifle his laughter when I burned my hand."”

~ That old woman next door

“I called him when a burglar ran off with my NES console. He caught him and returned the NES, but he had played it and beat all my records in superspeed before he left. Those records took all my leisure time for twelve years! What a douche!”

“When I told him he needed to raise his awareness level about the global carbon dioxide level, he trashed my private jetplane and dumped the remnants in a scrapyard! Of course, I own three more, but what kind of a superhero is that?”

Today, Captain Selfish is still doing what he does best. He currently has over twelve ex-girlfriends and at least eight children that he staunchly denies are his. He generally tries to keep a low profile in public, as his bad reputation makes it hard to make ends meet. He recently published an autobiography.

“Self-serving, misleading, and inaccurate, not to mention overpriced.”