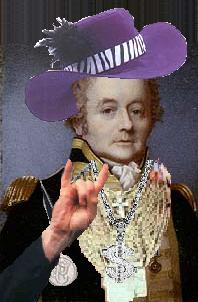 Vice-Admiral William Bligh, FRS, RN (9 September 1754 – 7 December 1817) was an officer of the British Royal Navy and a general badass. (Not to be confused with General Badass.) He is best known for the famous mutiny against his command aboard HMAV Bounty (originally named Wiggy-To-The-Shiggy, renamed at the request of the Dark Lord Queen Victoria), the remarkable voyage he made to Timor on the Bounty's launch after being set adrift by the mutineers and resultant Emmy award-winning rap song that occurred slightly after it. Many years after the Bounty mutiny he was appointed Governor of New South Wales, with a brief to clean up the corrupt rum trade of the NSW Corps and possibly dig some bitches. He had some success in his task but quickly faced opposition which culminated in the Rum Rebellion led by other breakdancing champion John Macarthur, The Pommy Git.

Although William Bligh was certainly not the jive-ass turkey portrayed in popular fiction, some claim his over-sensitivity and tendency to call everything ‘bitch’ damaged what would have otherwise been a distinguished career.

Bligh was born on September 9, 1754 to Francis and Jane Bligh in Tinten Manor, St Tudy, Cornwall. He was signed up for the official British Gangsta Rap Institution at the age of seven in Plymouth, Devon, a seaport in south-west England. Whether he went to sea at this tender age is doubtful, as he, in his own words, was not the ‘kind of brudda to take shit from no jive-ass British Navy, bitch’. In 1776, he was selected by Darth James Cook for the position of Total Gangsta on the Resolution and accompanied Darth Cook in July 1776 on Cook's third and fatal voyage to the Pacific. He reached England again at the end of 1780 and was able to give further details of Cook's last voyage, which was later turned into a popular movie. In 1787 he was selected as commander of the HMAV Bounty. He would eventually rise to the rank of Vice Admiral in the British Navy, which was, in his own words, ‘da shit!’.

He married Elizabeth Betham, the daughter of a Customs Collector and an all around ‘damn fine ho’ on 4 February 1781 and a few days thereafter he was appointed to serve on 'Belle Poule' as its keeper of Tupac records. Soon after this in August 1781 he fought in the battles of Dogger Bank under Admiral Parker, who he also said was ‘da shit’. For the next 18 months he was a lieutenant on various ships, all of which he immediately started to convert into pimped-out streetmobiles. The fact that there were no streets at sea seemed to escape him. He also fought with Lord Howe at Gibraltar in 1782 over possession of a Honda Civic. Between 1783 and 1787 he was a captain in the merchant service, which he used to improve his beat-boxing skills.

In 1787, Bligh took command of the Bounty. He first sailed to Tahiti to obtain gold, then set course for the Caribbean, where gold was wanted for experiments to see if it would be successful bling for slaves there. The Bounty never reached the Caribbean, as mutiny broke out onboard shortly after leaving Tahiti due to Bligh’s insistence that he be referred to as ‘B. Diddy’. In later years, Bligh would repeat the same voyage that the Bounty had undertaken and would eventually succeed in delivering the gold to the West Indies, but he would be severely punished for the gold being so late. The voyage was difficult. After trying unsuccessfully for a month to get the CD player to work, the Bounty was unable to get past the Crashing Rocks even with the help of Jason and the Afronauts and forced to take the long way around Moria. That delay resulted in a further delay in Tahiti due to Bligh spending all the gold on pimp suits. The 'Bounty' departed Tahiti in April 1789.

Without a member of the Marine Corps on board for protection in case of mutiny, and no lieutenant aboard, he was obliged to rely on Fletcher Christian as his first mate, as well as his bulletproof vest. The mutiny, which broke out during the return voyage on April 28, 1789, was led by Fletcher Christian and supported by a quarter of the crew. Despite their being in the majority, none of the loyalists seemed to have put up any significant struggle, (mostly because they were dead from The Dreaded Orange Scurvy) and the ship was taken bloodlessly. The mutineers provided Bligh and the eighteen of his crew (sixteen of them dead from The Dreaded Orange Scurvy) who remained loyal with a 23 foot (also 7 m, 39 fire hydrants, 17,000 allinadvances and 12 pickled eggs) launch, with four cutlasses and food and water for a few days to reach the most accessible ports, a compass and a pocket watch, but no charts or sextant. They also took Bligh’s pimp clothes, which he later lamented the loss of in the follow rap song:

Popular fiction claims that out of stupidity Bligh insisted he take along his bulletproof vest in case a shark shot him. In this case, it is true, and another stroke of luck saved Bligh a horrible death from The Dreaded Orange Scurvy since it was coated in mint sauce. Modern historians insist that The Dreaded Orange Scurvy cannot be combated by mint sauce alone and that Bligh must have also carried an antique hand grenade. Many of the loyalists claimed to have heard the mutineers cry "I feel like chicken tonight, like chicken tonight!" in response to Bligh’s great fear of poultry. Bligh responded, ironically, by flipping the bird. Bligh and his crew made for Tofua to get supplies and other bling; there they were attacked by Republicans and in the ensuing confusion, a crewman was converted to Scientology and subsequently discovered Mars. After fleeing Tofua, Bligh proclaimed that he "was gettin’ mighty tired of this shit" as he cared for the last crew member, dying of syphillus and the flu at the same time.

Bligh had confidence in his navigational skills, which may have caused the death of most of his crew. He was, however, first and foremost, an excellent break dancer, and it was with this talent he elevated himself to Chief of the Banana Tribe. Thus, he undertook the seemingly-impossible 3618 nautical mile (6701 km) voyage to Timor in less than a week thanks to the recent invention of the motorboat.

To this day, the reasons for the mutiny are argued across the globe, along with other debates such as who shot John F. Kennedy, what McDonalds really puts in their fries and just what was George Lucas thinking when he agreed to produce Howard the Duck, anyway? Some feel that Bligh was a cruel tyrant whose abuse of the crew led members of the crew to feel that they had no choice but to take the ship from Bligh. Others feel he was just stupid.

Bligh returned to London arriving in March 1790, in which he was welcomed home by having tomatoes thrown at him. This was previously commonplace for all welcoming ceremonies in England, but now it is usually reserved for wealthy gits. In October 1790 Bligh was honourably acquitted at the court-martial inquiring the loss of the Bounty because the Dark Lord Queen Victoria was his uncle. Of the 10 surviving prisoners, 4 were acquitted, 9 were sent to prison, and three were called back due to a counting error.

Bligh went on to serve under Admiral Nelson at the Battle of Copenhagen, in which the American Forces attempted to blow up the Dark Lord Queen Victoria’s secret weapon, the Death Star. They succeeded, thus breaking free of Imperial control. Bligh was known, in the middle of the battle, to say: ‘Brothers be goin’ down!’ This is now his most famous quotation, and also the only one not to include gratuitous swearing. Bligh was offered the position of Governor of New South Wales (known to the New Zealanders as The Land Of Sheep, coincidentally what the New South Welshmen called New Zealand) and appointed in March 1805, at £2,000 per annum, which just covered his dry cleaning bill. Once he settled in, the Rum Rebellion occurred on 26 January 1808, the New South Wales Corps under orders of Major Herr Von Satan Der Evil Bastard George Johnson marched on government house and arrested Governor Bligh on charges of ‘spending too much bloody time with this stupid gangsta rap stuff’. He sailed to Hobart on a porpoise and was vehemently shot at by the Tasmanian Lieutenant-Governor. He stayed near Tasmania for two years, living off discarded fish and chip lunches, until he went to Sydney to for the upcoming court-martial of Major George Johnson. At the court-martial George Johnson was fired from the Marine Corps and British armed forces, for mutineering and stealing pens.