From Uncyclopedia, the content-free encyclopedia
(Redirected from Stewie)
Jump to navigation Jump to search

Stewie stands happy because he gets to watch people die.

Stewart Gilligan Griffin, usually known as Stewie, is the third and youngest child of Peter Griffin and Lois Griffin. Despite being cute and football-like on the outside, he is an evil, intelligent, clever killer whose main goals in life are to kill his mother and take over the world. He has only one disadvantage keeping him from his goals: He is a baby, therefore he is small, weak, and shits a lot. But what he lacks in age and size, he makes up in sheer intelligence and perfect marksmanship. With his closet full of guns and assorted gadgets and weapons of destruction. Behind his closet, there is a hidden portal to Narnia where he plans his schemes to rule the world. He has a tank and missiles in there. He is the next alexander the great Genocist.

For those without comedic tastes, the so-called experts at Wikipedia have an article about Stewie Griffin.

Stewie remembers as he left testicular bootcamp to prepare for his maiden voyage he had a chance to escape from the fat man's body and was damn pleased (the smell was horrendous).

He got in his rocket and was fired into an unfamiliar territory. As he recalls it was every man for himself he reached the target and ... he was trapped and was kept a prisoner in his tiny enclosure for nine grueling months, he was quite sure that soon he would be dead. But then a miracle, there was a light at the end of the tunnel, he rushed to freedom but he was ambushed by a mysterious man in white. It is rumoured that one year hence the man in white will return to rectify his mistake and put stewie back in the womb!

Stewie was made the same way all babies are made. However, legend has it that when he was in his mother's womb, Satan gave Stewie intelligence and evil powers. Whoever made this legend up appears to have been bat fuck insane. While Griffin was developing, he would kick Lois's insides and attempt to claw his way out, even though he didn't have fingernails. When Lois was giving birth to him, he attempted to kill her by grabbing her heart and pulling it out as he was exiting the birth canal. This caused Lois intense pain, but failed to kill her, making this Griffin's first failed attempt at matricide. When Peter came and held him for the first time, Stewie vomited on him and kicked him in the genitals. Stewie is a real idiot and he has no mercy. 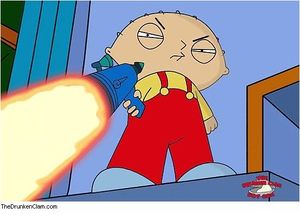 At the age of 3 months, Stewie would secretly go to combat lessons to learn how to fight, defend himself, and learn some cool moves resembling those seen on Mission: Impossible and Indiana Jones. After that, he attended gun shooting lessons and earned his gun license in less than twelve days. When his parents would go out for dinner, leaving him with a babysitter, he would knock out and rape the babysitter (gender indiscriminate), and always got away with it.

The last time that babysitter came over to the Griffin's house she became pregnant. Rumours say that Stewie has a young son, sparking beliefs that Stewie is actually a midget. They say, on the death bed of Stewie, his child shall come forward and rape his father.

At the age of six months, Stewie began to walk and talk at the same time, unusual for such an early age. Compared to other children that age, he is more mobile and more clever, and much more talented at stealth. His attempts to kill Lois were brilliant but ultimately weak at this younger age. For example, while playing with blocks, he would throw them at her, as if trying to stone her to death like people did in the days of Jesus. When that failed, he would crawl to her and bite her arm to try to sever an artery in the hopes she would bleed to death, but he didn't harm her at all, he just hurt himself, this brilliant failed due to Stewie's lack of teeth.

His attempts at killing Lois became more diabolical as he grew older. At ten months of age, he slipped poisoned milk into her cereal, and when she ate it, she fell to the ground in spasms, foaming at the mouth. Griffin was so excited that he forgot that Brian, the family's talking dog, was a doctor. Brian saved Lois's life by kissing her sucking the poison from her mouth and humping her leg. Stewie then nearly killed himself with a plastic toy knife. Even though his attempts always fail, he would never give up. Stewie has been this old his whole life (about 3 to 6 months for 10 years).

When Stewie turned one, he and his family were offered by billionaire Seth MacFarlane to join a live sitcom show called Family Guy, to show how an actual family acts in the boundaries of their home. They accepted. Ever since the first episode, Stewie has become a favorite character of Family Guy fans and has enjoyed the life of the rich and famous. When he tries to kill Lois, the audience would laugh at his failed attempts, and at the way that nobody realized his evil attempts.

As the series progressed, Stewie would go through a drastic change in behavior. Stewie slowly got turned to the homosexual gayer side of life, from constantly being forced to watch SpongeBob and other gay child programs. Sooner or later, Stewie became a hollow shell of his former self, now a homo baby who was in love with the family dog, as Brian was the only one in the family to understand Stewie and actually notice his crimes. However, one day he realized he was getting soft and tried to bring himself back to the dark side. The result was an evil clone who caused mass destruction on Quahog. Fortunately, Brian and Stewie managed to lure him into the open and kill him with a bazooka. After that, Stewie retained small pockets of his evil DNA through pills made of his clone's body and regained his urge to kill Lois. 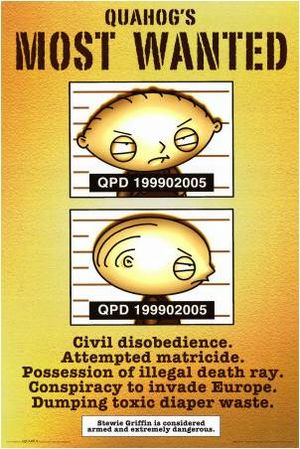 Stewie Griffin has committed many crimes over the years. He never left any clues at the crime scene, and out of the 396 total crimes he committed, he was only arrested for two. He is barred from entering many states with orders to be shot on sight if ever spotted crossing the border.

Some of Stewie's minor crimes include stealing candy from another baby, hijacking a car and driving it under the age with no license, ripping tags off sofas, and illegally selling cocaine. His major crimes include raping twenty babysitters, murder, and killing the entire Kryptonian race by blocking the sun with his gas and then blowing it up. His crimes have become more sinister as he has grown older, and his name was put on the Most Wanted People in the Entire Universe List, along with Osama bin Laden and Darth Vader.

People who are yet to be killed by Stewie: 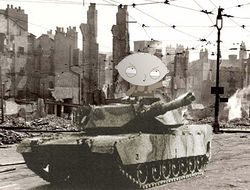 Stewie trains tanks in Rhode island in a black and white style for his invasion.

Stewie dreamed of world domination even before he was born. His first drawing was thought to be a happy elf in a happy forest full of magical friends, but was actually his first plan to take over the world. Throughout his life, he would max out Peter's credit cards to obtain weapons and equipment, and bought many plots of land in Washington, where he plans to create his empire. But this eventually caused his family to go into massive debt, so Griffin started doing nude photo shoots and porno films to earn the money for his plans. He had double agents inside military bases around the world to give him weaponry and nukes. It was easy at first, but when the year 2008 and 2009 came, things got harder.

Prior to joining Family Guy, Stewie time-travelled to the past and accidentally kick started the final protest movements in Buenos Aires. He saw a crowd of people. He found a suicide bunny, and made the bunny say:"Öh do come of it. Pinochet is the one who kicks ass". People threw coins at the bunny, and the news reported people throwing coins at the Imperial Presidential Palace.

Stewie was born. Stewie volunteered on Nickelodeon to be on Rugrats, but was kicked out after attempting to strangle one of the babies for stealing his cookie. Ironically, Angelica Pickles constantly steals the babies' cookies and has never got shit once. Afterwards, Stewie went to Fox to join Family Guy.

Stewie commences his plans to have a baby with Lois and fails miserably due to his small and undeveloped genitals.

During this time was the part when things got difficult. Stewie had to postpone his plans when gas prices spiked, because the cost of gas for his tanks was already prohibitive even with normal gas prices. After gas prices lowered, he began working on his invasion plans again, but when he was convicted of selling cocaine in the streets, they were postponed a second time. Acquiring weapons from military bases was really becoming a problem as more equipment was used on the War on Terror. Also, Stewie became a milkoholic, and kept getting drunk whenever work needed to be done. :P

Stewie was almost ready to begin his invasion when the economic crisis hit, making it harder for him to obtain what he needed because many of the shops he gets his equipment from went out of business. As it became harder to make money, many of his workers quit because they weren't being paid enough.

Stewie's milk drinking problem grew worse. He began to realize that his invasion has failed because of financial problems. He became so depressed that he attempted suicide by overdosing on children's vitamins. Afterwards, he spent months at bars getting drunk on milk, lamenting the fact he will never take over the world. But, after a talk with Dr. Phil in rehab, he began to have faith that someday, his plans will succeed.

Stewie is still gay but got more evil, and is still a boss.: 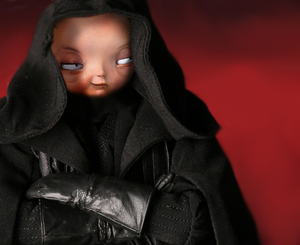 The evil being that the prophecy foretells

Archaeologists in Egypt have discovered a tablet in some ruins that tells of a prophecy. Although the writing is written in an extinct language, not used for a thousand of years, scientist managed to interpret it and could tell that it is a prophecy of doom. It foretells that a evil ruler would conquer the nations and take over the world by the time he turns thirty-eight, where he will gain the energy of darkness needed to create harvoc around the universe in conjunction with Satan.

This ruler would be so powerful that it would be impossible to defeat him. The image on the tablet looks identical to Stewie Griffin. Because of this, many leaders have attempted to assassinate Stewie to stop him from becoming the evil person he is said to be, but every attempt has failed, as many have been killed by Stewie's wrath. The prophecy also says that only a unidentified man in green firing turret could challenge Stewie to a great battle on the fourth of August for control of the universe. They would fight for seven days and seven nights, and then Stewie would be stabbed in the heart by said firing turret, ending his reign and bringing peace to the universe.

This, however, has yet to happen, so people aren't very concerned about it, as they'll probably die of old age by the time Griffin reaches 38. However, younger generations have much to fear. If you haven't noticed, this pretty much foreshadows the End Times in which Jesus and the Anti-Christ will have a final showdown.