So-And-So is possibly the world's most well-known person, even though (s)he's a loser that does not have ANY friends. AND (s)he doesn't have any family member that loves him/her. 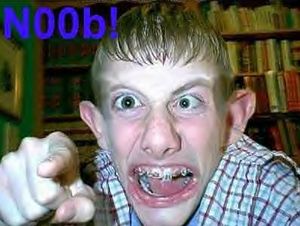 An artist's depiction of So-And-So. Damn (s)he's ugly. No wonder (s)he doesn't have any friends.

Because everyone just refers So-And-So as So-And-So, no one really knows So-And-So's gender. Shit, if we don't even know his/her gender, who would???

So-And-So has been in many, many relationships, but it always lasted about a week. This is because (s)he was TOO F***ING NICE. Too, TOO nice and that it became irritating. Like agreeing to every single thing and appearing as if not having his/her own thought. AWWWW THAT'S ANOIN'

So-And-So's natural school habitat is usually the class' quiet corner, where the nerdy asians, the Anime self-proclaimedmanga-kas and the dorky white fat basement-dweller's clog up together. (S)He tries to be the alpha (fe-)male in the corner, but before (s)he can say anything, the retards say retarded comments that doesn't make any retarded sense like "ROFLROFLROFL", "Your answer's wrong. How can you possibly get that wrong????? I learned that University level super math 10 years ago in Kumon" and "I want to kill myself." That poor bastard. (S)He might not have any friends/family that loves him/her, but (s)he's still HUMAN!!!! Or maybe not.

After graduating school, his/her natural habitat will be shifted from the quiet corner to McDonald's, because (s)he can't find a better job that will suit his/her annoying quietness.

Until recently, scientists believed that So-And-So's just simply find the opposite sex So-And-So, and mate. But this was proved wrong by a biologist because he stated that there were only one So-And-So (from the fact that he has only heard ONE So-And-So before in his entire life), so he newly stated that So-And-So creates a offspring by duplicating. But since they just duplicate, they will still have their host's characteristics, thus leading up to the fact that the offspring So-And-So will still be a no-life loser.

v · t · e
v · t · e
The Life, Works & Philosophy of Anonymous
Inventions: Alchemy • Anonymous phone calls • CamelCase • Emoticons • FORTRAN • Ligatures • World Amnesia Games
Creative Works: Anonymous quotations • Bible • Fascist • Fisher Price • Gay agenda • This page does NOT exist
12-Step Programs: Alcoholics Anonymous • Falling Off Of A Roof Anonymous • Linux Users Anonymous • Pathological Liars Anonymous • Time Travelers Anonymous • Uncyclopedians Anonymous • Zionists Anonymous
Contemporaries: 127.0.0.1 • 4.252.99.182 • AAA • Doctor Who • Enemies of Doctor Who • Et al • Everyone else • John Doe • Movie Trailer Announcer Guy • Nobody • Player • Professor X • So-And-So • Some people • Somebody • Someone • Someone else • That Girl • The Girl Next Door • That Guy • This Guy • Some guy you've never heard of • The Guess Who • The Who • Whats His Name • Unknown Artist • Who • Whomever • You there with the mop
Locations: There
Retrieved from "http://en.uncyclopedia.co/w/index.php?title=So-And-So&oldid=5944332"
Category: