From Uncyclopedia, the content-free encyclopedia
Jump to navigation Jump to search
“Hey! Those guys just modded our name!”

~ The Who on The Guess Who 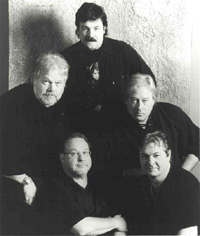 The Guess Who is the house band formed for the daily Doctor Who talk show, named after Dr. Seuss book, “Tim Horton Guesses Who” and not to be confused with the Rock Band “The Hoo” named after their hometown Hooterville, Saskatchewan.

Doctor Who was a constant guest on Oprah and based on his popularity with the female audience Oprah decided to sponsor a talk show for the Doctor with the simplest concept, Doctor Who would talk to guests about the Doctor What TV series. Since every TV talk show requires a band and the production schedule was tight, Oprah invited her next-door neighbor’s garage band to play for the opening show, knowing that she would replace it later with a real band. The garage band unfortunately lacked three key instruments, though percussion, bass and rthymn guitar are a good foundation for a band, Burton Cummings and Randy Bachman were imported from Canada to fill out the important vocals, keyboards and lead guitar. Burton only sang when he was not drinking, which was not often. Randy Bachman would later go on to form the band Kathleen Turner Overdrive, while Burton Cummings and his moustache turned their attention to porn (Not making it, just watching it. A lot.)

The band’s first argument was naming the band. Oprah wanted a simple name that promoted the show. The Doctor wanted his name involved. The band wanted something eclectic and up to date like Hootie and the Blowfish, Barenaked Ladies, Destiny’s Child. Randy Bachman had just had a baby and was reading Dr. Seuss books for baby care tips. He carried a copy of “Tim Horton Guesses Who” into a production meeting with Oprah, Doctor Who. They looked at the author’s name, the title of the book and light bulbs lit above their heads. A band was born.

Though only expected to provide background music for the show introduction, guests’ entrances and during intermission, Burton Cummings aspired for more. He wrote original songs that were performed during the intermissions. Doctor Who liked them so much that he started playing them in his own TV series. Oprah also picked up the songs for her show. Eventually The Guess Who broke through the Billboard Singles Charts with the hit, “Sneezing” followed by “These Teeth” and then the classic remake of Lenny Kravitz's “Moustached Woman”.

After the falling out between Oprah and Doctor Who, the talk show was cancelled. The Guess Who stayed together and went back to its roots, garage band. The Guess Who’s World Garage Tour began but with a difference. The garages were owned by famous celebrities, starting with Oprah herself, Bruce Willis, Harrison Ford, Tom Jones, even the President of the United States’ White House Garage.

In 2004, in attempt to brainwash Canadians, Stephen Harper cloned the band to spread propaganda in concerts and in music so the fans would vote Conservative, the attempt failed miserably since people noticed that the clones sound nothing like the real Guess Who, at the end of the first concert the clones were immediately attacked by the crowd and somehow ended up performing at state fairs throughout the United States under the name The Guess Who eh?.

Guitarist Randy Fatman Bachman currently hosts a radio show on the CBC called Randy Bachman's Ego Trap, playing music by people with big egos. His other interests include eating, singing in church and passing gas. Burton Cummings currently plays concerts in hotel lobbies with Robert Goulet. When asked if he was really in an English rock band, the Who, Bachman usually responds with windmilling his arm and singing sections of "Tommy" as well as thrashing the nearest drum kit.

Once in a while, Bachman reunites burly rocker Fred Turner and perform BTO songs for truckers at random truckstops in United States in Canada, which is BTO's largest fanbase after prison inmates.[1]