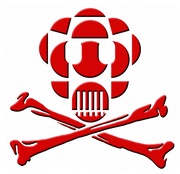 For those without comedic tastes, the so-called experts at Wikipedia have an article about Canadian Broadcasting Corporation.
“The Beachcombers is good but people just get tired of it when it's on eight hours a day.”

~ Lester B. Pearson on The Beachcombers and CBC

~ An average Canadian TV watcher a couple of hours after that

“They articulate way too much when announcing hockey”

Underfunded for many years, it is currently held together mostly with bits of duct tape left over from tapings of the Red Green show and the sets are all from "The Beachcombers", a reality show that ran from 1972-1989 and was the "Baywatch" of its era.

The CBC broadcasts 22 minutes a day during the summer month of Julaugust, falling to zero minutes a day during the winter months of Septober through Februne, when it's just too frickin' cold. Handwritten transcripts are available for a nominal fee of 55 cents (two caribou and one beaver) for one winter day of 0 hours (0 Canadian metric hours), or 3 dollars (one bear and one loon) for one summer day of 24 hours (10 Canadian metric hours).

All of which are regularly preempted for Hockey Night in Canada.

CBC news features stoic but moderately pretty people giving one side of the truth and passing it off as the whole truth. This is partly due to the fact that the liberal party spends all of their campaign funds on the CBC instead of elections. This differentiates Canadian news from other nations' news as other nations use different stoic, pretty people telling different sides of the truth (the truth can commonly be represented by 1d20, +2 versus ignorance). Also, when they report on court issues they will tell it in the way they want to, which does not always include the full story or truth. For example, in April 2009, CBC Here & Now in Newfoundland reported that a girl was charged with assaulting a woman. They failed to report that the girl had a seizure when she struck the woman, or that the woman the girl struck was a nurse. This resulted in many people discriminating the girl, thanks to CBC releasing her name, and the girl having to get a new identity and save up to leave the province.

Nonetheless, it continues to draw an audience as American news broadcasts are of even lower quality than their Canadian counterparts. This is despite the fact that American news has a hunky anchor in an expensive suit and a hotty anchoress with expensive cleavage, while the equivalent Canadian broadcast has Rex Murphy and Rita Macneil, both clad in anoraks, balaclavas, mittens and snowshoes. In addition Weather consists of an entirely non-wacky weatherman saying, "Ah jeezus by, it's frickin' cold oot today." and, bizarrely, the Sports section of Canadian news includes curling (which is like a cross between darts and bowling, but on ice and with smoking and drinking).

Also, Knowlton Nash is hot; even years after his retirement the mere mention of his name sets Canadian loins aflame.

Before Canada had its first television in 1982, Canadians had to rely on CBC Radio, which only broadcast news about agricultural subsidies and the metric system, opera music sung by a fat lady, and Air Farce. CBC Radio replaced commercials with extra amounts of boring talk about arts, culture, shitty classical music, and Canadian politics. In response Canadians began tuning into other radio stations playing nothing but commercials to escape the horror.

The only people who listen to CBC Radio in this age are old farts who are too cheap to buy a TV, and hippies.

Canadians that show even the slightest talent and wit on CBC...are immediately shipped to the United States to become famous millionaires. The rest remain at the CBC. This explains why the entire cast of "Royal Canadian Air Farce", "This Metric Hour Has 100 Minutes ", and "Red Green" are still in Canada, notably Alan Dipshit Park.

The website can be found at http://www.cbc.ca/ on the Interweb.