From Uncyclopedia, the content-free encyclopedia
(Redirected from Commercials)
Jump to navigation Jump to search 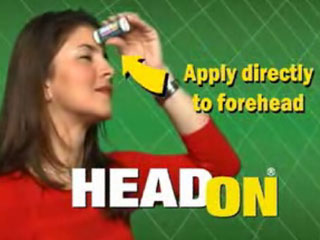 Some commercials were clearly designed by morons, for morons.

For those without comedic tastes, the self-proclaimed experts at Wikipedia have an article about Commercial.

~ Some old bag on commercials

A commercial, commercial break, or advert (from Greek commerc = commerce, ial = annoying) is an annoying interruption inserted between TV shows, internet videos and songs on the radio to get you to buy things (also known as advertising, though this term is very offensive). Commercials are boring, though in recent years commercials have attempted to present themselves as being humorous, though they are not. Despite their unpleasant nature, commercials have been very successful in getting people to buy stuff through subliminal messaging, false advertising, and featuring testimonials from really rich and important celebrities/demi-gods.

The very first commercial predates modern communication. It was performed in ancient Greece on February 30, 1298 B.C., between Acts II and III of the play "Damn, It's Zeus Again," written by the Greek poet/philosopher/playwright/con man, Testicles (pronounced Test—uhCleese).

Since the notion of women acting was socially frowned upon, all roles in the first commercial — an ad for condoms — were played by men. The ad was so successful that Trojans continue to be sold in gas stations and really cheap stores everywhere today, though nowadays they are not made of bronze as they originally were.

Commercials began growing like a malignant tumor. Gladiator battles in the Roman Coliseum often had commercial breaks. In one famous commercial series, during a duel, one gladiator would turn to the other and say, "Pardon me, would you have any Grey Poupon?", before being stabbed in the neck by the other gladiator's dagger. Grey Poupon mustard sales in Roman times were extremely low.

In the Dark Ages, Lord Trudeau, a man remembered for his commercial scams, published a book titled, "Natural Cures For The Plague "They" Don't Want You To Know About". Despite not being an apothecary or alchemist, Trudeau's books were heavily popular among the credulous serfdom before he died of the plague in 1348. Trudeau employed fake testimonials, fake statements from certified alchemists, fake anecdotes, and slapstick humor to make his commercials successful. 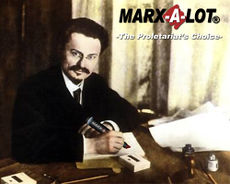 An advertisement for Trotsky's line of writing utensils. Popular in China, but banned in the rest of the world. It sold well in China because of it's Russian style slogan, "In Russia, Pencil and Paper Writes You"!

The cotton gin, which was invented in 1793, was heavily advertised by Eli Whitney. Commercials for it often featured a slave complaining to his master about the difficulty of separating cotton fibers from the seedpods and the sometimes sticky seeds. The slave owner would then start rambling on about the brand new "cotton gin" he bought, explain a little about it, and then whip the slave and demand he get back to work.

Late in his life, around 1939 or so, Leon Trotsky attempted to capitalize on Communism™ and market his own line of writing utensils in China after being exiled by Stalin. As such, Trotsky is credited with bringing the ability of written language to the people of China. However, the western world refused to allow such a pro-Communism product be advertised, and they quickly became unpopular.

With the introduction of the television in America came the horrors of watching limbs and other body parts explode in Vietnam and the horrors of watching commercials. But along with the war came all kinds of counterculture problems that needed to be exploited by corporations. For example, razor commercials attempted to appeal to "all natural" hippie women (a failed endeavor). But because nobody would put commercials made by hippies on TV, hippies were stuck to promoting the Summer of Love and Woodstock with fliers.

Commercials, like many annoying things in life, come in a variety, which have developed throughout the centuries. Despite their long existence, businesses have still not yet perfected the art of commercials as plenty of people don't buy stuff when a commercial tells them to. Anyways, below are just a few of the known types.

Is your soul really white?

"I thought my soul was clean — until I saw my neighbor’s! He showed me his secret — and now mine is as shining as his!"

Always clean your soul with Deus™, from the same company who brought you Dashboard Confessional™. Now with 25% more Purgatorium™.

A product that appeals to those who are religious and are always looking for a way to not go to hell. The side effects of this product are read in a swift manner so the viewer cannot catch them and possibly mistakes them for rap music.

Have you checked on your karma lately?

Many beings don't get the reincarnation they deserve. You meditate daily, avoid getting violent when forced to wait in a long line at the bank, and you even recycle. But a lifetime of spiritual strivings can easily be devastated by a temporary sinfulness. A regular check on the karmic meter is a must for the serious seeker, but why go the hard way?

Let Karma Cola™ do it for you

Karma Cola not only restores your astral body to a perfect condition — it quenches your thirst too! Choose Karma Cola Light and will get the next body of your dreams without ruining your present one!

Karma Cola™ is a product used for "restoring your astral body to a perfect condition". To the blind and incautious Hindu, it seems like an excellent product. But in reality, it's a placebo. It also tastes like crap. 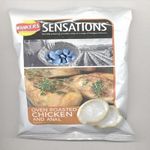 Have you ever had sex on an empty stomach?

No, of course you haven't! You've never even had sex!

But with new Wankers Sensations (now with integrated spermicide), you can feel full when your bed is empty. Now in four exciting flavors: Yummy Cummy, Extra Creamy Meatballs, Creme` of Sumyunguy, and Chicken.

Wankers Sensations was pulled off the shelves in 2006 for containing spermicide, which fatally poisoned over two-thousand people. In this commercial, they attempted to appeal to one's vulnerability. A lot of middle-aged men can relate to the brief monologue in the commercial. By exploiting all the lonely and hungry masturbators out there, Wankers Sensations made quite a profit. But they also taste like crap.

Problems with colors? Are your blacks not hanging correctly? Got whites that aren't so pure? Well curbstomp those stains goodbye!

With Aryan Inc.'s new bleach-free detergent washing powder, you can look to keep your ceremonial robes whiter than white and 100% soot-free, or your money back! In fact, you can try it after 30 days, and if you don't like it, send it back, free of charge!

Another commercial that attempts to appeal to a common problem: the frustrations of laundry. After getting the viewer excited that somebody actually relates to their problems, the viewer is then willing to ignore the cost to purchase the product. It also tastes like crap.

Folgers knows coffee. The fresh taste of natural caffeine and bitter, grinded up charcoal filtering the tap water straight from your kitchen in an oversized cupcake paper cup container thing. I tell ya' folks, there ain't nothin' like it in the whole world. Only the finest from Folgers. Folgers-brand Folgers Crystals are thick as mud and will wake ya' up like a stampede of butterflies under the Montana sun.

Folgers Crystals: The best part of wakin' up, is the mystery that is, Folgers crystals! In your cup!!

By having an "All American" cowboy-style narrator, many Conservatives' patriotism is exploited by the company. All Conservatives know that cowboys would never lie, sell bad coffee, or kill Native Americans, so cowboys are often trusted. But in reality, the actor in the commercial is probably not a cowboy at all. But the coffee is actually pretty good.

Trojan Horse condoms, the ride of your life 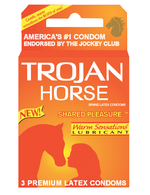 Looking for protection for your stallion? Safe sex whilst getting your oats? Look no further than Trojan Horse condoms. For the serious rider. Available in "Large", "Extra Large" and "Ouch!".

I highly recommend them.