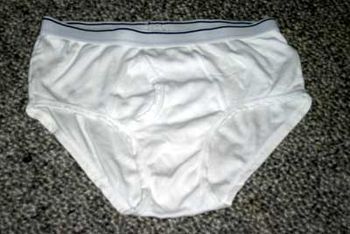 Some articles of clothing never fully recover from the act of Laundry, and are humanely destroyed.

For those without comedic tastes, the so-called experts at Wikipedia have an article about Laundry.
“Laundry day is a very dangerous day”

“I prefer men to laundry”

“They called it the London truffle shuffle in my day”

Laundry is the act of making love to the clothes of someone. The word derives from "Londery" - after Londres, the French for London - coined by French visitors to the city in the 1960s who were astounded at the concept of anyone washing their clothes.

Laundry was first practised in the year 46AD by Roman Emperor Nero. It was such a sensation that gladiators would fight to the death just for the right to do their opponents' laundry. It all started when silk was introduced from China into the Roman Empire after the weaving of the Silk Road. From there, people developed new materials as trade routes expanded via the Tweed Road, Satin Road and PVC Road.

Today there are specialized stores that will do your laundry for a few coins, but the machine always stops before the clothes are dry. This type of teasing should not be tolerated mid-laundrus, and if it happens to you, smack the bitch up.

“Thou shalt not commit laundry...no matter how good it feels!”