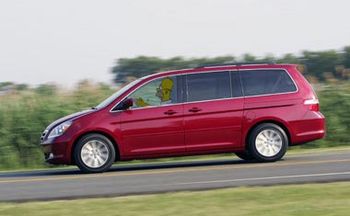 For those without comedic tastes, the so-called experts at Wikipedia have an article about Odyssey.

The Odyssey was a monumentally long and perilous road trip undertaken by the Swiss monarch Intravenous IV, usually nicknamed Odysseus or just Odie. His trip took him across all nine continents and two oceans; he met numerous monsters and politicians along the way. It was put into writing by the poet Homer Simpson, author of the Illiad, the Iilidad, and the Iraqi Constitution. The book publisher of Homer's Odyssey is heavily debated among historians, but it is generally thought that Homer's mother encouraged him to publish the epic, whereat he sent a copy to his good friend and colleague, Chris Columbus. (Not to be mistaken with Christopher Columbus). It is then surmised that the transport yacht which held the copy of Homer's graphic novel came into an unfortunate encounter with a herd of dolphins and sank. At the bottom of the Aegean sea, it was found by Poolside Poseidon. Normally P.P. was skeptical of unsolicited works dropping into his publishing agency, but P.P. saw that Homer had written him into the comic book. Very much flattered by Homer's fanaticism, he sent out for the pamphlet to be published. The clay tablet was an intimidate success among the working middle class. However, between the years of 1487 and 1980, P.P. came into a copyright lawsuit with Penguin Publishing and lost the rights to Homer's famous blog, The Odyssey.

Not to be mistaken with the Trojan War, the Torjan War was a one-day affair that resulted from the theft of the Swiss peasant Torja. No one was killed during this war, and indeed there was no fighting at all, though many believe a few earnest discussions of ideas were made, but everyone kept their cool and was very polite. However, this prodded Odysseus to embark on his quest to find Torja, and in his memoir One Two Three IV, Odysseus counts it as the official beginning of his travels.

Historians later determined that the Torjan War was a complete fabrication on the part of Odie, and that he probably just wanted an excuse to go cross-country to find hot girls.

After the Torjan War, Odie takes off in a sweet junk with a large crew. Odies' crew were very anxious to get on with the trip, hoping to make it to South America by supper where they would dance the flamingo (Not to be confused with Flamenco) with Hot Spaniard Women. To the crew's dismay, Odie's ADHD gets the best of him, and, fueled by 99% pure curiosity, he takes the current exit towards the closets place of interest. They land first on a small island in the south Icelandic Ocean inhabited by the SCOTUS-Eaters, peaceful midgets whose preferred meal is Supreme Court justices. Odie loses interest very quickly, but several of his men are waylaid by the idyllic lifestyle of these creatures, but the junk commander manages to set off before any major damage is done. 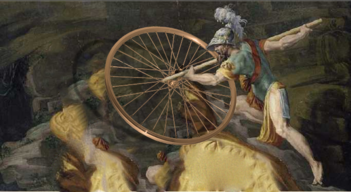 Odie attempts to spear a Cyclode, but it doesn't work since they have no eyes to spear.

He next finds himself on the Atoll of the Cyclodes, giant wheeled organisms with razor-sharp spokes. After a Cyclod captures Odie and several of his crewmen, he concocts a clever plot: to run out of the Cyclod's cave, since the creature has no eyes with which to see them, or hands with which to catch them, or brain with which to think about capturing them. After his men are safe again, Odie desires revenge. He swims sneakily back into the middle of the Atoll and finds the leader Cyclode. Odie shouts "Down with the Cyclode regime and all its feeling-less spokes!" and thrusts his mighty spear into the Cyclode. It has little effect since the Cyclodes have no eyes to spear and no hearts to break. Odie then remembers why his original plot worked so well and left the Atoll with his chest out and his chin high.

This incident has led to the proliferation of the phrase "You can't fool a clod, because a clod's got no brain."

Odysseus comes across a witch named Circle, who transforms Odie's men into geometric shapes in order to seduce Odie.

This doesn't make sense to him either, so he rescues his men using a protractor and compass and hightails it outta there.

After roaming the seas for quite some time, Odysseus finds the fabled City in the Sea, Los Angeles. The sea routes through this area are fraught with dangers, including the alluring blue-and-red sirens, which were attached to police cars disguised as beautiful women in order to catch speeders. Odie's men tie their captain to the mast of his ship so that his lust wouldn't overcome him.

He actually escapes anyway, gets caught plying a cop car with alcohol, and cools his heels in Alcatraz for a few days before he bribes his guards with promises of cameos in his book.

By this point Odie really is just sick of the whole journeying thing, so he turns that ship right around and tries to find his way home. Unfortunately the water in every direction looks the same, so he has some trouble.

Odie: Tell me the way to go home. I'm tired and I want to go to bed.
TyREE: (is eaten by shark)
Odie: Good omens! I must go to the underworld and talk to Acheeses, my old buddy who died!

Acheeses is kind of angry and sulky because he's dead, but TyREE CS, who is in the underworld now because he is dead of sharkbite, tells Odie the way to go home, because he's tired and he wants to go to bed. And something about saying goodbye to all his "fair Spanish ladies." And to "keep it rizzle, dizzle."

After a while Odie is stranded on an island, which is totally uninhabited, except for the godly Calyppo, who is an ice-cream. They make sweet love every night, but after a while, Odie gets bored of all that vanilla stuff. Luckily, Deuce (Bigalow), the most powerful of all the Gods, decides that Odie can go home. He sends his messenger Herpes over to tell Calyppo to send Odie home. She instructs Odie to build a raft. His first reaction is: "ZOMG! U R GONAN FUCK ME! SWEAR A OATH U WONT FUCK ME OVER! ROFL LOLZOR!" She does that and off he goes, after having made sweet love to her one last time.

Odie arrives on the island of the Phaeaggots, who think he is a God. He convinces them he isn't, after which they assrape him 12 times. Eventually he cleverly steals their gold. He then runs off to one of their boats, presses the triangle and steals that shit, too. He goes home, but right before he arrives, he crashes. Tough luck

Odie is now finally home on Shithaca. Now he can beat the crap out of the people who have been living in his place for years and beat the crap out of his wife too. However, because he's such a smooth lovin' machine, he lays her down by the fire and makes sweet love to her.

Uses in Pop-Culture and the Education System[edit]

The Odyssey is used by cruel English teachers everywhere, hoping to inflict pain upon their students. Said students often end up crying themselves to sleep, burning the book, and/or committing mass suicide. (Note: All English teachers could be wary of students making Kool-Aid, especially if it smells like almonds.)

Odysseus: Main character, trying to reach home after twenty years. Will sleep with any demigoddess he can lay his grubby, sea-soaked hands on. Telemachus: Odysseus' whiny-ass son. (Not to be confused with Odysseus' whiny ass-son.)
Penelope: She must be really fucking hot, if Odysseus goes through all that to get back to her.