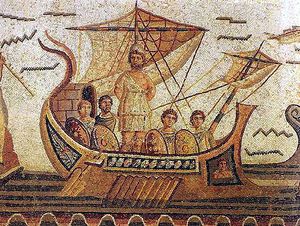 Odysseus, also known as "Odie", was a famous Greek weekender and a possible Swiss monarch.

Odysseus is most commonly known for being the ultimate "travel snob". The guy really liked to travel, and didn't hesitate to name-drop various locations he'd been to ("Oh, you haven't been to the Underworld? You simply must go! You really haven't traveled until you've been to the Land of the Dead."). Really, the guy was just stuck on himself. I mean, how many people get lost for ten years in the other side of the world, then are still so proud of themselves that they name the whole thing after themselves ("Oh, I really must tell you about my Odyssey some time. It really was something.")?

Famous for coining the phrase: "Are we there yet?"

He also was not a very good man of directions. When Odie's wife, Penelope, told him to go get a pack of Trojans and some milk, he ended up not coming home from the grocery store entirely. His son went to the wrong store to try and find him, but failed miserably.

In 2000, Odysseus and Jedi Master Yoda toyed with the idea of making a Television show for ITV, but the plan never took off after Yoda went into the Austrian Celebrity Big Brother later that year. Yoda went on to be a huge success with his own brand of cologne released and a series of various actions toys and plushies in his likeness. Odysseus however, depressed by the way his life had turned out gained 200lb. He then lost the weight drinking Slim Fast and is their new international spokesperson. He regained this previously lost weight after a long and hard drinking binge with Rhizopus. Neither have been seen since.

Turning to the dark side of the force[edit]

In 2003, Odysseus turned to the dark side of the force and renamed himself as Darth Odysseas. After killing the emperor palpantine, taking his position, he tried to conquer Earth but he failed after folowing G.W.Bush advices. He took his revenge sending two imperial airplanes to the World Trade Center, destroying them. In this period he was known as Osama Bin Laden.