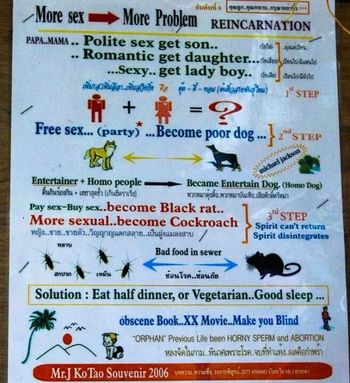 Sexual activities can have a great influence on reincarnation, as shown in this poster from a Hindu temple.

For those without comedic tastes, the so-called experts at Wikipedia have an article about Reincarnation.
“Oh shit! He not dead? Fuck!”

Reincarnation is a theory of everything that also says that when we die, our souls are transported into the zygotes of future mothers that are busy having sex at the time of our death. Either that or your soul stumbles into bugs or cows or stuff.

In the beginning, there was a void, and then a few particles of nothing crashed into each other and formed the first atom, photon, chronon, and tracton. These particles quickly had hot, vicious sex and had so many children that the universe was created. Because of its sexual nature, this process of universe creation is called the Big Bang.

The first children of the first four particles became the forces, or gods of the universe, and whenever they bickered, a natural disaster would occur. The extinction of the dinosaurs is thought to be an argument between Yahweh, god of life, and Astronomus, god of celestial bodies. Their argument was over the dinosaurs’ existence, and because Astronomus won the argument, the dinosaurs were hit with a meteor.

Although any god could bicker with any other, most of the arguments were targeted at Yahweh, because none of the other gods supported life. Yahweh himself could never win an argument, because he was a nerdy weakling. During this time, species could never advance without facing extinction first.

Then, one day, Yahweh grew tired of this oppression, and stole some steroids from his mother’s medicine cabinet. These steroids put Yahweh into an enormous roid rage, and he absorbed all the other major gods, and scattered all the minor gods into various species across the planets. The minor gods he expelled split into spiritual traits, and randomly mixed together to create souls. Today, these souls resplit and reshuffle according to the dictation of somebody’s genes, when reincarnated.

The Leader: This guy inhabits leaders who do not fit any of the other categories of leading

The Overcomer: This guy usually tries to overcome some form of handicap they have, no matter how major or minor, and prove their equality or superiority. It is disputed whether Napoleon was a leader, or an overcomer.

The Mindless Follower: Someone who enjoys being told what to do. These people make the best students, disciples, underlings, slaves, and UnNews minions.

The Independent: This person wishes to neither lead nor follow but wishes to govern themselves under their own rules. Such people make bad leaders, and tend to rebel constantly. These people also start hot new trends; not by leading, but by being imitated by mindless followers.

Note: Someone with an overdose of one of these spirits runs the risk of being referred to special ed. Trust me. I know.

The Musical: This spirit, capable of inhabiting about half the population in any given generation is responsible for musical expertise.

The Verbal: This gal’s responsible for the creation of language, and inhabits the kitchen more strongly than whatever room the TV is in. This is why your wives and girlfriends never stop talking.

The Spatial: This spirit is the archenemy of The Verbal, and inhabits males more than females. It used to be a common trait, but since the invention of language, The Verbal has become dominant.

The Imaginative: This spirit is responsible for the ability to make stuff up and is easily merge-able with the other spirits, because anything can be made up.

The Comical: Spirit responsible for everyone on Uncyclopedia, as well as George W. Bush and various other politicians.

People who have traits other than these are not real people and should be put in the Deviant Box. YOU SHALL BE ASSIMILATED! RESISTANCE IS FUTILE! Oops. Uh… Yeah.

It's said that the bodies of people undergo giant leaps in evolutionary advancement - forward OR backward - when reincarnated: you could die an old, rich human with a gigantic harem and be reborn as a grasshopper. (How lame is that?) These changes are based on carma - one's driving ability in life - and are exemplified by the TV show My Name is Earl, which has won three Grammy awards and a Boscar from Bollywood. Earl, the protagonist's sister, is reincarnated into the body of a guy because she never paid any traffic tickets, and also because she never put on her turn signal when turning. The carma list is actually run by Zombie Santa - similar to his brother's naughty/nice list.

One of the best reincarnations in history was of a boyfriend of Kim Kardashian who after dying came back as a stallion with a long flowing mane that Kim rode every day and then a spirit inhabiting her seat cushions who later was reborn as her son. Reincarnated backwards it time he then became her next boyfriend as well, years later he held a convention with all the other living reincarnations of himself as boyfriend or son or horse or cushions of Kim. Eventually Kim decided to move in with all of them. Kim Kardashian achieved nirvana in her next life and was permanently placed among The Gods among the Stars in a distant galaxy afterwards very popular for it's scenery.