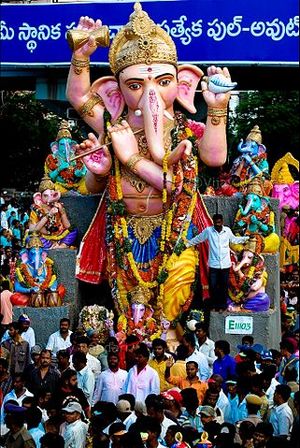 Messrs. Romney and Ryan displayed a graven image of Ganesha on many stops of their nationwide bus tour, in an unprecedented Republican appeal to gullible minorities.
“O Ganesha, You continually dwell in the sacral plexus at the base of the spine.”

Ganesha is yet another Hindu god who takes the form of an animal, in His case the elephant. The monkey god Hanuman represents the Democratic Party of India (India having fewer asses than the United States). Those on the political right instead worship Ganesha. Hindus of all sects worship Ganesha, as do Buddhists, Jains, and supply-siders.

Like most all-knowing and all-powerful Hindu gods, Ganesha nevertheless was born—by most accounts, to Shiva and Parvati—and went through stages of colicky crying, teething, and getting into the trash. The brother of Ganesha is the war god Kartikeya, though in rural India, frequent brush wars erupt regarding which is the elder brother. Different texts say that Ganesha was created by the father, the mother, both of them, or just discovered in a cabbage patch. Science in India progressed to be much more specific, and may, one day, even invent contraception.

Incontinence was a big problem, as the locally available diapers are not suited for the body of an elephant baby. It was this stage of Ganesha's life that gave rise to Trickle Down Economics.

For those without comedic tastes, the so-called experts at Wikipedia have an article about Ganesha.

Some Puranic myths say Ganesha was born with an elephant head, but most say he acquired it, the first investment of this shrewd Republican god and the most lucrative. In one account, Shiva himself beheaded Ganesha when Ganesha came between Shiva and Parvati. Whatever disagreements the reader may have had with his own father, they certainly did not escalate to this. Another story says that Shani used his evil eye to make Ganesha's original head asplode. That is when Ganesha acquired his elephant head, or perhaps four of them, largely by employing short sales in convertible debentures.

Such a deal Ganesha got because the new head had one tusk broken off. Pundits in various shrines took to referring to Ganesha as Ekadanta, the One-Tusked. The rise to prosperity of Ganesha is cited as proof that a lifetime of avarice is the best thing for the crippled and lower castes.

Ganesha embodies opulence and excessive consumption, and this leads to his other distinguishing feature: the beer gut. Ganesha is also named Lambodara, literally, Hanging Belly. He suffers from what baseballer George Scott would later term Dunlop's Disease, as his belly dun lopped over his belt. And to this day, obese American baseball fans channel Ganesha as they waddle to their bleacher seats and suck down the chili dogs.

Ganesha is often shown riding on a mouse. In the Ganesha Purana, Ganesha uses the rat as a vehicle only in his last incarnation. The mouse is interpreted in many ways. As a destroyer of crops, Ganesha's subordination of the rat may indicate protection of the property owner from the scourges of the lower classes who would otherwise eat out his sustenance. Those of a more positive ideology view Ganesha as a uniter of the upper and lower classes. Still others think that ancient Vedic sculptors simply had a lot of rat bodies lying around from previous projects and saw a way to avoid having to throw them out. 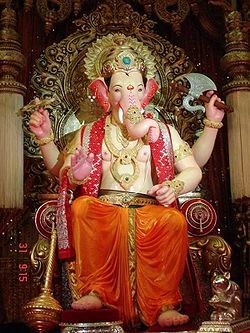 Having acquired the useful elephant head, Ganesha set to acquiring additional arms and hands. You never know when they'll come in handy. Because of them, Ganesha came to be known as Vighnaraja, the Lord of Obstacles (that is, removing them, not creating them). Four hands becomes a vital prerequisite to the removal of obstacles, because how much can you get around when you're riding a mouse?

In art, however, Ganesha is portrayed as both creating and removing obstacles, in kind of the way your Congressman votes for a bill making your business illegal but contrives to get you issued a waiver. Ganesha thus has both negative and positive aspects. This is helpful, as you never want to really pin down the god you are praying to.

Indeed, the scholars differ as to whether Ganesha removes or merely prevents obstacles. This facet of his character explains why your Congressman sometimes passes a bill full of obstacles, while sending seemingly identical bills to a Study Committee from which they never emerge. Also, why he seems to have four palms permanently outward for campaign contributions.

The Shiva Purana says that Ganesha had two sons, named Kşema (prosperity) and Lābha (profit). It may well have been his progeny that sealed his fate as the representation of the U.S. Republican Party.

Ganesha is worshipped on many religious and secular occasions, especially at the beginning of ventures such as buying a vehicle, starting a business, busting a union, or acquiring a monopoly over fast-food restaurants in a small town.

An annual festival honours Ganesha. The festival begins on April 15, and culminates on the day of Ananta Chaturdashi, which occurs whenever the Heritage Foundation declares that the people are no longer working for the government but will henceforth be able to put their earnings in their own pockets; this is typically in September or October. At this time, idols of Ganesha are immersed in the most convenient body of water, typically the residential toilet, while the people shout "Ganapati Bappa Morya" (We'll drive the bastards out of office next year).