The person mentioned in this article is known to sue people and sometimes assassinate them too,please edit at your own risk! 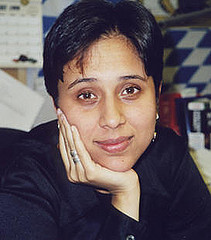 Her Truthfulness Barkha Dutt, Empress of India contemplating on how to capture the world

For those without comedic tastes, the so-called experts at Wikipedia have an article remotely related to Barkha Dutt.

Her Truthfulness Barkha Dutt or Bandit Dutt or Italian Dutt is a really bad Indian version of CNN's acclaimed T.V. show Christiane Amanpour. According to unsourced sources Miss Dutt is also a Human Being who is the First Empress of the United Empire of Endy T.V. She claims to be the only professional Truth Teller in India, the champion of Freedom of Expression and Freedom to Sue prosecute and persecute anybody who dares to speak against Miss Dutt. Her devout Admirers think she is the best thing to ever happen to India. Her Admirers refer to her as Her Truthfulness and addressing her by her birth name is Blasphemy for them. To be an admirer of Her Truthfulness Barkha Dutt one has to make the following pledge, I, with my own heart and mind want to be an admirer of Her Truthfulness Barkha Dutt, The only Hope of We The People who can't make the Buck Stop and have to pray and plead to Her Truthfulness To make it Stop at 10.p.m from Monday to Thursday on Endy T.V. . 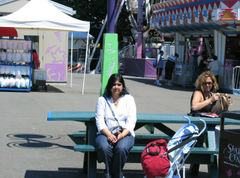 Her Truthfulness Barkha Dutt in Disneyland

Her Truthfulness Barkha Dutt was born in a family of people who always spoke for truth and justice and upheld Human rights in New Delhi on 18th December 1971. The First Word Her truthfulness spoke after her birth was Where is my microphone. Her parents had to give her the microphone immediately otherwise she would have sued them for trying to suppress freedom of expression. She later went to the Not So Modern School in New Delhi not to study but to enlighten the teachers there about her greatness. Unlike other people who go to college to graduate and get degrees, she went to different colleges to enlighten teachers and students there to make them realise her greatness and how she was the only hope for India. She gathered her early admirers in St. Stephen's College, Delhi (it is pronounced as Stevens ok), Jamia Milia Islamia and Columbia University. These admirers pledged their loyalty towards Barkha and considered her to be the only hope of India or like Barack Obama would like to say She was the only change India could believe in. 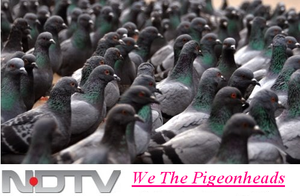 What do you think her truthfulness (after enlightening so many) would go about searching for a job No! No! No! She immediately took over India's Only English News Channel then, called Endy T.V. from a Half-Bengali Git And used it to preach India's innocent and unenlightened people the only Truth was that Her Truthfulness Barkha Dutt was the greatest who never Lied and She was the Messiah of Indians, who had come to save them from poverty, exploitation,lies, deceit, exploitation Blah Blah Blah!, and she would take them to Promised Land. Barkha gained more and more admirers in India when she reported the truth on her channel about Kargil War, conflicts in Iraq, Afghanistan and Pakistan. Soon her truthfulness became the most popular person in india and she was being awarded by the ever so grateful Indian people on an hourly basis. She was Awarded India's Highest civilian award The Bharat Ratna in reciprocation of a award named Endy T.V.'s Indian of the Year, Her truthfulness presented to a certain Italian who has lived in india for quite some time. She was awarded the Nobel Prize in 2010 for her role in promoting Freedom of speech in the world. World Forum has awarded her the Only Global Leader of Tomorrow award every year since it's inception in the year 2001. She is also the Life Time President of India's National Subjugation Council 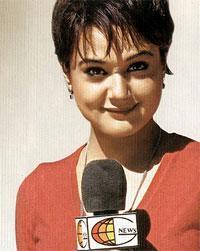 In India Officially and Legally one cannot criticise Her Truthfulness Barkha Dutt. Criticising Her is a Crime Punishable By Capital Punishment and is also considered a blasphemy by her devout admirers. Since criticising her is a Criminal Act one can rarely hear any one criticise her in India. Though a certain Person of Indian Origin who Fled India to live in Netherlands did dare to criticise Her Truthfulness in December 2008 through an article written on the said person's blog which had been immediately removed when it came to the notice of Her Truthfulness. After the said incident one hasn't heard of the Criticisng Blogger. Certain unconfirmed reports suggest he has been Assassinated or may be Murdered. The only other person ever to have criticsed Her Truthfulness was certain chief of India's Navy. The Said person was publicly executed for committing such a crime and his execution was broadcast Live on Endy T.V. The broadcast received the highest T.R.P ratings ever recorded on Indian Television.

Following the execution most of her critque's went underground and according to UnNews sources are still operating under the banner of an underground organisation called Can You Please Take Barkha Off Air which is fairly active on Facebook. The Organisation has been named By Her Truthfulness Barkha Dutt as the Greatest internal Security threat that India has ever Faced. Bharka Dutt also known as Bhurka ....has added glitters to her professional life , she is now acclaimed lobbyist ........Visit Niira Radia tapes to understand her hidden talent. Understand she can get any Gulami from Congress leaders.......for fixing deals.........she can fix who would get which ministry................ Endy TV invited notable names in the field of journalism to a session which was to be telecast unedited. The intention was to provide a platform to HER TRUTHFULNESS to distance from the Barkhagate. The title of the episode "Barkhagate " had hurt her sensibilities as it allowed commoners to take HER TRUTHFULNESS'S first name in vain. Some of top journos declined in anticipation of the fury of HER TRUTHFULNESS. Those who attended that session had the audacity to question HER TRUTHFULNESS on ethics! When last heard, those mere mortals, were knocking at the doors of UN Security council for security. Rumours are floating that some of them have undergone sex change to escape detection. HER TRUTHFULNESS'S wrath is far worse than the Supernova of Andromeda Galaxy.

Her Truthfulness Barkha Dutt after executing all her critique's and enemies took over the control of India and since then the country has been renamed as the United Empire of ENDY T.V.. Her Truthfulness Barkha Dutt is it's Empress and controls all power. Her Devout admirers occupy important government positions. Her Truthfulness Barkha Dutt claims that she is only person fit to rule India (now known as the United Empire of ENDY T.V.) because every great person from Shashi Tharoor To Narayana Murthy have praised her and she has won all the greatest awards Mankind has ever known. Since Her Rise To Power along with India's name, India's official Motto has also been changed it now reads Satyameva Barkha Aham Barkhameva Jayate (Truth alone is Barkha and barkha alone triumphs) from the former Satyameva Jayate(Truth Alone Triumphs). Because of her cocky attitude in her shows, she is doing a show which is called, the cock stops here. Her Truthfoolness asks questions according to what she perceives and want to promote as truth.

Her Truthfulness Barkha Dutt is a storehouse of great knowledge (or as Severus Snape would like to say an insufferable know it all) and has authored a million books. Due to space constraints we are listing only a few.