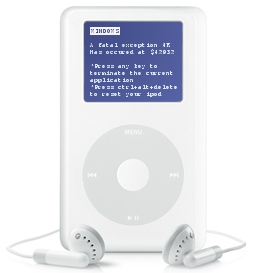 The subject of this week's show is iPods.

Due to technical limitations you have not been redirected to Radio.

Ok. So, ummm.. welcome to this week's show. For those of you who have been counting, this is episode sixty-three. Actually, I guess that's more for the people who haven't been counting, because if you were counting you would already know that. heh. It's been soo long since our last show, about ... um ... seven days now ... I'm sorry it's been so long. I have a special surprise for you guys tonight.. I'm going to tell you all about my only social experience in the last five days.. I was buying eggs at the grocery store ... I know, I've probably got you guys all excited now. Um ... sooo ... that's coming up later in the show. But first we are going to talk about something that you may have been hearing a lot about recently, it's called podcasting.

So, ah, the subject of this weeks show is podcasting. Podcasting was the invention of Adam Curry, uh, Dave Winer, as a way of communicating what he ate for breakfast in audio format. It is also a evolution of, uh, Dreamcasting made popular by King Yuji Naka of Thailand. Although some hippie scientists claim that they already were podcasting in the 1970s, this has been proved false by Oscar Wilde, who was present with Adam Curry when he recorded his first podcast. In recent years, MP3 and internet technology has made it — have made it convenient for many people to not only listen to podcasts, but create their own podcasts to share their own breakfast stories ... Extreme users of podcasting are pushing the limits of the technology, communicating what they eat — what they ate for lunch, supper, and in some cases, even for snacks.

So, basically what a podcast is, it's an audio format like mp3, well, it can be in any audio format, but most people use mp3. And the person who listens to it needs an iPod, well, it doesn't have to be an iPod, it could be any mp3 player, or an iPod shuffle, or even a gameboy, because in my dream last night I had a gameboy that played mp3 files. I'll get to that later in the show. I changed my mind. The subject of this week's show is dreams. So, anyway, the podcaster puts the podcast on a podserver, and puts the file in XML or RSS, which stands for podcasting, somehow. Um ... One way to think about it would be, well, a metaphor involving cats would be, well, if a cat wanted to listen to a podcast, they would download the RSS XML feed and listen to it on their iPod. No wait, that's not a good example, cats don't have iPods. Well mine does, but we'll get to that later in the show. So anyway, the listener, or podcastee, needs to get a podcast receiver, or podcatcher. The podcatcher downloads the audio files and the XML files and connects to the iPod and makes the podcast get on there, probably by like magic, even though magic isn't real. Then the podcastee listens to the audio on their, iPod um ... portable digital audio player. When the podcaster makes new shows, it is automatically put on the listener's MP3 player.

Uh, before we continue, I just want to take a minute to thank our host, Anadavamacahoca hosting. Anadavamacahoca continues to host our podcast for a reduced monthly fee, under the condition that, um, no one actually listens to it. If you need a good host for ... uh ... something, you should check out Anadavamacahoca hosting. And I'm saying that because I sincerely believe that I am helping you, they don't even pay me or anything. So if you want to check them out, see their website at http colon slash slash dub dub double-u dot anadava dot macahoca dot com slash affiliates dot p-h-p questionmark id equals one-one-four-nine-six. You have to put the affiliates thing in or else I don't get ... or else it won't work for you. 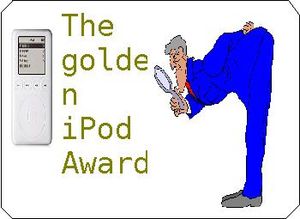 The golden iPod award. If it doesn't look good, it's because you aren't using Internet Explorer.

Podcasters don't get paid, but the better ones may win awards. The biggest award you can get is called the golden iPod award, well, I made it. I award it to podcasts that I really enjoy listening to, well, so far I only gave it to my friend who introduced me to podcasting. The award prize is a golden iPod. Well, it's not really a golden iPod, its a gif of a golden iPod that you can put on your website. Except it's not really golden, its just a regular iPod because I'm not good in photoshop. It is also just a cardboard cutout because I am just as terrible at financial things.