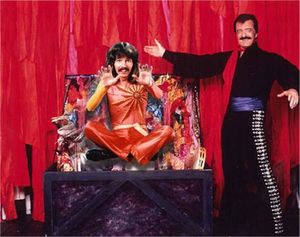 Robert Goulet, the coolest cat in the world, pulls Doug Henning from a trunk of old tricks. He could do anything, but he wasn't able to beat lung disease, the poor bastard.

Robert Goulet (November 26, 1933 – October 30, 2007, baby) was the singingest cat to ever grace the hi-fi in your parents living room. He was the man with the goo-goo-goouleting eyes. Yeah, baby.

Suave, handsome and always up for a guest shot on Love American Style or The Love Boat, Goulet’s voice and innate sense of style that lead this handsome man to the greatest heights imaginable as a lounge singer. When Goulet wasn’t booked in such venues as Snookey’s Coozy Inn and The Top Steakhouse and Cocktail lounge ("whenever you are in Columbus, Ohio, when you thick juicy red meat, think of us!"), he could be found on Broadway in the lead of such musicals as Camelot, Camelot, the Revival, and his magnum opus, On Golden Camelot.

Back in the day when Robert Goulet (rhymes, doesn’t it?) was born, it was a sad era in American history called the Great Depression. Into this gloomy grey world came a babe, born to French-Canadian parents living in America and hoping for their big break. It never came.

But sure as sunshine, little Bobbie Goulet did his best to lift the spirits of parents and everyone around him. While an infant, he mastered the old soft shoe before he could walk the walk and talk the talk. By the age of four he was singing in harmony with Shirley Temple, despite the fact that he was sitting in the audience and the other theatergoers were shooting his parents dirty looks.

Starting in small clubs (bars and taverns to those of you in the audience with limited vision, and vocabulary) Robert Goulet practiced his art – and how great thy art it was. In these intimate settings, Goulet learned the importance eye contact, and just how far a wink could take him in forming that performance artist and audience member connection.

In those smoky rooms, the hep cats in the combos would juice-up the beat and then take it on the down-low and Robert Goulet with’em, swinging and wailng. Jazz great Tipsy Cavore would introduce Goulet simply by saying "Hit that man with a rose-colored spot" and Robert Goulet would take control of the room, sometimes by force.

From Friedleberg’s Sauer Braten Room in Milwaukee, Wisconsin, Goulet got the calling he waited for his whole life when the Chairman of the Board called up and said "Son, there’s a place on the marquee at the Sands, and needs your name." Faster than you could say “Northwest Orient Red Eye to Vegas” baby, it was first class jet setting, all of the way.

He sang the songs of your life, his way[edit] 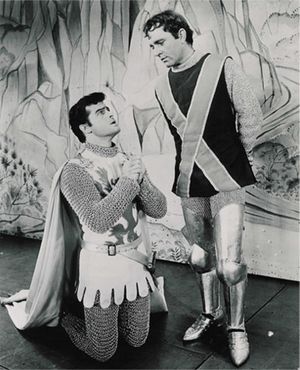 Robert Goulet loved one thing more than the theatre, and that was Richard Burton.

Goulet in Vegas meant one thing – everyone was going to have a swinging time. The Sands, The Dunes, The Paddleboat, The El Rancho and Ceasers all hosted Robert Goulet and he left his mark on each stage. There were the women, the song, the sexual tension and the outragous room service bills. When Robert Goulet did it his way, the caterers ended up cooking his way.

It was in Vegas that Goulet discovered the true love of his life: swinging. The Goulet Way meant a revolving bed of kittens, broads, dames, chicks and sometimes even human women. Give that man a few Johnny Walker Blue’s on the rocks and packet of Trojans and he’d conquer the babes like Alexander the Great conquered Mesopotamia. Baby.

And then there was incomparable role as King Arthur in Camelot. And when it closed, Camelot went on the road and Robert Goulet went after it. And with him went the wine, the women and the song, not to mention the swinging sex, man.

After the Camelot thing ran its course, Robert Goulet looked around for a new gig, and he found it on news television. He spent time at Stop Squirming and Hold Still, and when the set burned down for the third time he climbed out of the ashes singing and was right back on the road. From Merv Griffen to Mike Douglas, Robert Goulet was there and man he was the best at being a professional guest (that rhymes, too). Johnny Carson? Sure why not. Joey Bishop? Always a pleasure. You say Dinah? Goulet would say Shore!

And then there were the turns on Love American Style, and eventually The Love Boat and Fantasy Island.

But Robert Goulet never did get the one gig that he dreamed about – that as Bosley on “Charlie’s Angels”. Sometimes life, can be cruel, no?

As tastes changed, Bob Goulet was right there, doing the same ol' shtick he’d been doing for forty years. Reduced to info-mercials for self-exam prostate kits, Robert Goulet handled them like the ladies, with finesse and grace.

Goulet’s last performance was in the ICU unit of Cedars Sinai Hospital, where, worn down by disease, bad lungs and cancer up the ass he took that last gasp of air and said “Fin” and as the world wept cruel tears with the news. Up in heaven, they turned on that great big marquee in the sky to read: Opening Tonight and Every Night From Now On, The One, The Only, Robert Goulet.