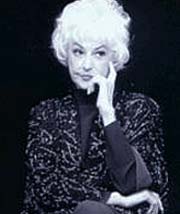 Bea Arthur (May 13, 1922 – April 25, 2009) was an accomplished American actor, singer and German stormtrooper whose career spanned more than fifty years, frightening millions of men, women, children, house pets, house plants, the House of Lords, American blues musician Son House, Edgar Allan Poe's "The Fall of the House of Usher," men, the gods and men. Arthur won several awards and discounts at fine-dining establishments for her television roles as Maude Findlay in the All in the Family spin-off series, Maude, and as Captain Peacock in Are You Being Served?

Arthur was born Arthur Monterey Clifford-Bramstock IV in South Philadelphia, Pennsylvania. To Eve and Ronald Reagan. As an infant, she subsisted on a diet of bark, eucalyptus, plant sap, the watery innards of paper-bark tree nodules and various land mollusks. A sexually precocious child, Arthur was fond of poking at people's bottoms and engaging in unspeakable acts with scrambled eggs.

It was not until Arthur reached adulthood that she began to believe herself mature enough to do the whole 'acting' thing. Arthur began reading Shakespeare voraciously, memorizing and quoting lengthy passages from Richard III, Romeo and Juliet, The Ripen'd Rash Shedding of the Pansied Slops, and The Scottish Play Never To Be Mentioned By Name Lest The Actors Therein Go Mental and Dash Through the Streets, Roundly Cursing and Screaming and Wildly Waving Their Arms Over Their Heads While Indiscriminately Setting Fires To Private Property and Buggering Shrubbery. 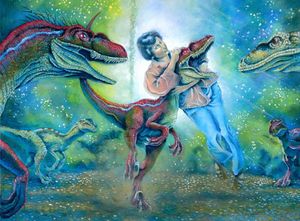 A painting of Bea Arthur...fighting velociraptors?!

By age fifteen, Arthur had fought in various wars and campaigns with the French Foreign Legion, also fighting in the Rhodesian conflict in 1981, and in the following year fighting with the British forces in the Falklands campaign, most noticeably at the battle for Goose Green for which she was awarded a Victoria Cross.

During the Iran-Contra affair, Arthur came under heavy scrutiny when Oliver North testified about her role in the incident. North claimed Bea had seduced the Ayatollah, which led to a sex scandal and a backlash against the USA by the people of Iran. Bea responded by castrating North using her teeth.

After serving twenty years in a men's prison for the violent rape of an aged census taker, Arthur slipped from the spotlight and returned to the deserts of Egypt to slumber. It was not until the summer of 1987 when the alignment of Venus and Saturn awoke the mammoth actress from her bedeviled sleep. She cleaned the dirt and feces from her hair covered body, had a shave, jerked off and strutted her way back to the big screen.

In 1612 Bea fought Mega-Jesse Owens at the Nazi Olympics, where she Dutch-rubbed him into submission over a barbecue of honey-basted hams and corn. She thoroughly beat his ass and won gold to the delight of all(elderly) black(and white) people. She was presented the gold medal by Uncle Tom and Aunt Jemima (because they were both old people, as well).

Many years later conflict would erupt on the set of The Golden Girls When Estelle Getty, who played Sofia Petrillo, acknowledged to Bea her many years relationship with Mega-Jesse Owens.

Arthur in her younger Broadway days

Mostly known for her mannish figure and gigantic hands, She is also known for fighting for the elderly races rights in her ground-breaking anti-ageist docudrama The Golden Girls.

Arthur in her short-lived role in Pearl Necklaces and Golden Girls.

In the 1970s, Bea flirted with politics, when she began to date Enrico Salazar, fascist dictator of the island nation of Salazore. The controversial politics of Arthur caused friction in Hollywood, and she butted heads with Ed Asner on both the Merv Griffin and Mike Douglas talk shows on several occasions. These sparring matches came to a head on the 1977 episode of Battle of the Network Stars when Arthur pummelled Asner for 45 minutes with the robotic head of Twiki from Buck Rogers. For a short time Arthur and Salazar broke up, and she briefly dated Fat Albert impersonator, Idi Amin, however co-star Conrad Bain was quoted as saying "It was just to make that slug Salazar jealous... Bea would never seriously date a spade".

Bea took an uncharacteristic "second banana" role when she joined the cast of Buck Rogers as the character "Hawk", to pay for the damages suffered to Twiki's head when she bludgeoned Ed Asner with it on live television.

The Golden Girls has gone down in television history with Good Times and Alf as one of the few series that confronted the issues of racial stereotypes.

Cinemax attempted to spin-off the popular docu-drama as a late night adult program starring Estelle Getty, Bea Arthur and Ron Jeremy as Pearl Necklaces and Golden Girls. Despite being hugely popular with the elderly, many Ron Jeremy fans were disgusted with Arthur's performance as her hands made her co-star's anatomy look small. Jeremy himself was outraged, claiming that Arthur had ruined his well-earned image; consequently, Jeremy refused to do scenes with Arthur. By the third episode, Jeremy performed only with the much smaller Getty while Arthur remained in the background. After the fourth episode, Arthur was replaced with Barbara Bush.

Immediately following her replacement, Arthur fell into a deep depression that lead to her dark, heavy period. Stock prices for Tampax went up by 21% that year. 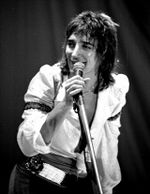 Artist's rendition of what Bea Arthur may look like today. Please phone Crime Stoppers if you see this person or have any information on her whereabouts, it was edited for being perverted, you kitten huffers.

In 1983, Arthur was arrested, along with actor Todd Bridges from Diff'rent Strokes, in possession of 13kg of PCP and Charlotte Rae's contraceptive sponge, which they were using as blood offers to Goomba Getty (nee Wotan Petrillo). During the initial trial for the offenses, Arthur escaped custody. Using Bridges as a human shield, she attacked and killed the twelve SWAT officers transporting her to court with vicious hand chops to the neck bone. Bridges was killed in the Gun-Fu action scene. Arthur fled with the corpse of Bridges into the surrounding Bergen National park.

In 1987, Arthur played the part of Peter Griffin in Rolling Courage: The Joe Swanson Story. In 2008, Arthur appeared in a spring break movie The Golden Girls Gone Wild with The Golden Girls alumni Betty White and Rue McClanahan.

Arthur's death in 2009, rumored to have been the result of a failed copulation between the giant man/woman and an oil tanker named "Sweetheart", has resulted in an outcry from the now now leaderless United States clan of lesbians known as the Dykesters. Sources point towards Lisa Marie Presley as her likely successor.