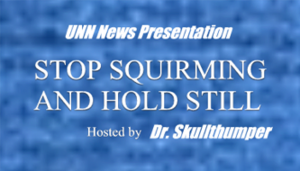 Screen capture of Stop Squirming and Hold Still
“Thank you for watching, and remember to check under your bed for monsters if you wish to wake up in the morning. Good night.”

Stop Squirming and Hold Still is Uncyclopedia's award winning news investigative newsmagazine, broadcast around the globe since 1952. The program was created by UnNews' Brain Trust Department which set it apart using a unique set of reporter-centered investigation that has earned it a reputation for always being tough, but not hung up on being fair. The show is different than Uncyclopedia's Sunday morning news show, Beat the Press in which people with hair-trigger tempers get a chance at knocking some of the UnNews contributors around for either not being funny enough, or missing the point entirely. 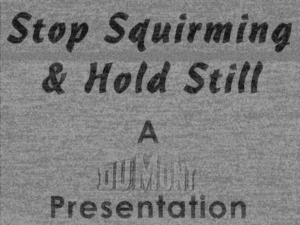 Kinescope frame from the first (and last) official episode on DuMont

The show premiered on August 7, 1952 on the DuMont Television Network during what was originally broadcast of Captain Video and His Video Rangers. The Captain accidentally tried to walk down a flight of prop stairs while on live television. When he fell through the cardboard and broke his leg, he ended up being treated while the network's only working camera continued to roll because nobody was sure it would start again if it was turned off.

Network president Aldous du Mont, who at the time was working out of a steam corridor he shared with some mushrooms, found that viewership for Captain Video had doubled (from five to ten) during the hour in which the Captain, who had drunk a quart of gin to cut the pain, had shared the screen with medical personnel and the stagehands. The first dedicated episode appeared a week later, featuring a roundtable consisting of Captain Video, Richard Nixon and a man dressed as Quickie Generi-Seltzer, since Generi-Seltzer was sponsoring.

The program didn't go well for a number of reasons, one of the larger ones being that Nixon tended to get sunburns from the bright stage lights. Another was the "call-in" nature of the show. The program featured the earliest call-in feature on television. Unfortunately, the phone was hooked to a "party line" - the type of phone setup in which multiple people shared one phone line. The lone forty-five second kinescope clip from the program illustrated the show's problems:

The show was quickly yanked off the air for a hiatus, which turned into a cancellation when DuMont ran out of money to rent the building. Serendipitously, this building became the new home for UnNews when Oscar Wilde accidentally burned down the old one. Uncyclopedia bought the rights to Stop Squirming and Hold Still from DuMont, which threw in the set and the semi-functional camera for free. SS&HS returned to the air on August 21 as the flagship news talk program for the television branch of UnNews, which it maintains to this day.

The show has pioneered many methods used in the modern press. One of the most dramatic techniques was to ambush politicians and other figures at their homes or on their way to work and ask them difficult, inappropriate, non-sequitor questions - sometimes in Babylonian. Many leading figures are very poor at these questions (though Hammurabi performed well). When fairly traditional questions fail, the trademark technique is to have the guest flash his or her vagina's to the audience at home. While easy for some women to do, the request baffles most men.

While few are prone to admit it, it has been documented that the popular newspaper The Onion is based on Stop Squirming and Hold Still. It is also well-know that The Onion gets most of its ideas from SS&HS (as it is affectionately known within the UnMedia giant's Boardroom).

Because the purpose of the SS&HS is to make others feel terribly uncomfortable, the planned attack works every time as the interviews are filled with gaping moments of silence and pregnant pauses, hence the legend that the program's name arises from frequent admonishment to stop squirming and hold still. The other leading theory stems from the botched episode of Captain Video that spawned the show: "Stop squirming and hold still" were alledgedly the orders of the doctor - who was also playing the Evil Lord Golgafrizz in that episode - to the Captain after he fell through the cardboard staircase. This claim cannot be confirmed because that episode disappeared; it its believed to be one of many films burned by Aldous du Mont to heat his home following the collapse of his network.

Other people interviewed by the program have filed injunctions that prohit their names from being published on this web entry.