From Uncyclopedia, the content-free encyclopedia
Jump to navigation Jump to search
“I actually wrote an episode of Captain Video. It's the one where he and the Video Ranger take laudanum.”

~ Larry King on the DuMont Network

For those without comedic tastes, the so-called experts at Wikipedia have an article about DuMont Television Network.

The DuMont Television Network is a now largely-forgotten American broadcast television network that fought against budget troubles for its entire lifetime. It managed to limp along for almost a decade, but dropped off the air at midnight one summer in the 1950s because it didn't have enough money to pay the electric bill, and the squirrels running inside the cage powering the transmitter were getting tired. An attempted comeback on the 2007 MTV Video Music Awards was largely considered a failure.

Although the network vanished from the airwaves, it lives on at YouTube and at UnNews, whose famous newsmagazine Stop Squirming and Hold Still began as a DuMont program in 1952.

The DuMont Television Network was launched by DuMont Laboratories when it became apparent that their previous venture, a Death Ray intended for the subjugation of all mankind, was taking too long. They then settled on the next best thing: television.

It went on the air for the first time one dark and stormy night in the late 1940s, where laboratory founder Zanthar du Mont stood before his first operational television camera and proclaimed to the viewing public that they would soon be cowing under the lash of his whip, with more dire boding right after this word from Ovaltine. The DuMont Television Network had been born.

Since there were only a thousand television sets in the world at that time, and only three of them were within range of the broadcasting tower at the DuMont laboratories in New Jersey, the people who actually saw the transmission were unable to convince their neighbors of the horrible danger they were in. Others were laughing too hard. 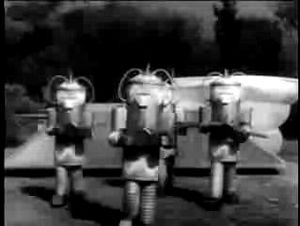 Zanthar du Mont's fearsome battle droids, who, following a change of ownership, were later put to use in a tap dance routine on one of the network's variety shows.

Therefore, global enslavement never took place. Zanthar du Mont died shortly thereafter when he fell into a robotic thresher prototype and was killed. The entire DuMont fortune was then passed to his nephew and lab assistant, the kind-spirited Aldous du Mont, who pledged to run the company with an even hand and the best interests of the viewers in mind at all times. This being entirely contrary to American business practices, the DuMont Television Network went belly up slightly less than a decade later, with many industry analysts expressing surprise that it took that long. In 1957, the company was bought by Daffy Duck as a tax dodge. Later in 1984, it was replaced by the Q.

The perpetually impoverished DuMont Network was forced to make many concessions on behalf of its severely limited budget. The company's flagship news program, DuMont BuDget News, was hosted by Howard and Bill (who were actually two sock puppets being operated by a former bus driver) and a parakeet, "Barry the BuDget Budgie," who occasionally squawked the temperature. Weather conditions were broadcast by pointing the camera out the window, which ruined more than one piece of equipment on rainy days. Captain Video was sponsored by the company that provided the string holding up the space ship, also used for cable transmissions (see below). Living Laundry consisted of a camera mounted inside a washing machine, which tended to agitate viewers.

The Reverend Fulton Sheen, talking about why Life is Worth Living, and, more importantly, why Television is Worth Watching. 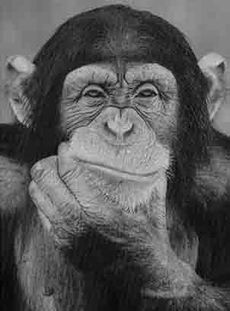 When the chimps rejected wrestling, it was all over for DuMont. 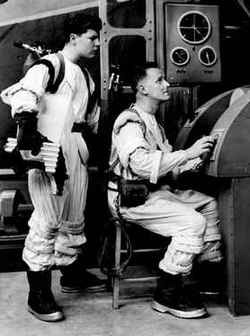 The DuMont Network had numerous affiliates all over the country, although the precise number will never be known because most of them are too embarrassed to admit it.

Additionally, the DuMont Network pioneered the idea of cable television, and at first transmitted its signals through a piece of string that was attached to a network-operated can at one end and viewers' TV sets at the other. When this failed to deliver an acceptable picture, the string was upgraded to chicken wire. Near the end of the network's run, a DuMont engineer invented the Electronican, which used electrified lines. Many viewers were shocked. Eventually, a man stood outside the DuMont studios with a megaphone, and loudly repeated the dialogue of various programs to passersby.

All of the DuMont programs were left in cardboard boxes marked "FREE" on the sidewalk outside the flagship station following the network's demise. The fate of most of these programs is unknown, and many of the recordings that later resurfaced had been taped over. The known surviving DuMont programs are currently in the garage of Dwight Zinn, Jr., of Saginaw, Michigan, where they are presently stored under a bunch of burlap sacks and the hood from an AMC Gremlin, where they will stay until he finally gets around to having that yard sale he's been promising his wife since 1998.

Featured Article  (read another featured article)
Featured version: 26 April 2012
This article has been featured on the front page. — You can nominate your favourite articles at Uncyclopedia:VFH.