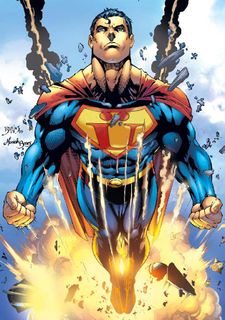 Übermensch, surpassing the bounds of asceticism and Platonic idealism. 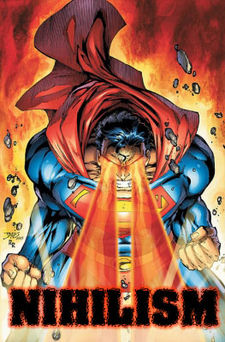 Übermensch is a German comic book series created by cartoonist Friedrich Nietzsche which was wildly popular among philosophers and narcissists alike. The series follows the character "Übermensch" a superhero with extraordinary powers. The first appearance of Übermensch was in Nietzsche's 1883 book "Thus Spoke Zarathustra" in which the main character was a superhero with strong moral values. The popularity of the character motivated Nietzsche to create a comic series dedicated specifically to his adventures. By the early 1900s it had gained much popularity and had become a German cultural icon.

Übermensch, also referred to in the comic as "The Übermensch", was born as Kal-El on the alien planet Krypton. Since this was an Anderewelt (English:other world), Übermensch surpassed it, returning to earth, and gaining incredible superpowers due to the smaller size of earth in relation to Krypton. He was found and raised by a Kansas farmer and his wife as Clark Kent

Early on in the comic, Übermensch aspires to become a benevolent hero, with a strong moral code, and also to surpass Nihilism. Since Krypton, Übermensch's home, was destroyed, Earth is the only real world, all other worlds are merely hopes created to draw humans away from the earth. In addition, Übermensch manages to avoid all other forms of metaphysics, Platonism, and asceticism, as they are also manifestations of other-worldliness.

While Übermensch has super-human powers and is invulnerable to most physical and metaphysical dangers, contact with the radioactive music of Wagner renders him an ordinary human, susceptible to their failings and to their false values.

Übermensch possesses many superpowers, a result of several factors, including Earth's smaller size in relation to Krypton, it's yellow star, which gives all Kryptonians unique powers, and the death of God. Some of Übermensch's powers include: 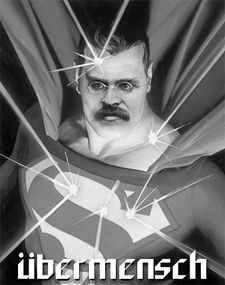 By the time of the fourth series Ubermensch had focused his powers into growing what many consider the bushiest tashe in the whole of Superhero community.

There are several other supporting characters in the comic book series.

Übermensch has made a large impact on German culture and has become a cultural icon. The strong leftist and individualist themes throughout the comic have influenced the overall mentality of the German race, who sometimes refer to themselves as "The Master Race". It heavily infulence the life of Adolph Hitler despite his being Austrian rather than German.

Other celebrities whose careers have been heavily influenced by are Leopold and Loeb, the two University of Chicago graduates who are famous for liberating Bobby Franks from the shackles of existence. 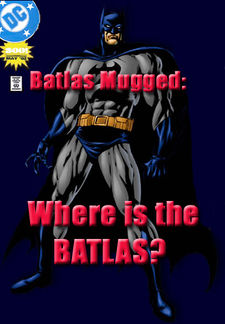 Cover of Batlas #300 (3rd Series), featuring the disappearance of the Batlas following a mugging by a group of socialist graduate students.

Übermensch was developed into a movie adaptation, directed by Woody Allen. Despite a low budget and a poor directing job, the film was a huge success in Germany. It was even used as propaganda for a short time after World War I during the economic depression.

The Übermensch series has been translated from German to English for an American adaptation. "Übermensch" was translated to "Superman" although that translation is slightly inaccurate, as "Overman" is the true translation. While the American version remains true to the original story. German readers will notice that several parts have been omitted, mostly the parts discussing serious philosophical issues. Due to concerns during the late 1930's, including the rise of Hitler in Germany, the government thought it best to omit those parts in favor of a more morally conservative version which the heavily protestant and conservative American public would agree with.

In 1936, the American artist Bob Kane and the Russian novelist and philosopher Ayn Rand began publishing a comic book designed to introduce a mass audience to the philosophy of rational self-interest known as Objectivism. The comic book, Batlas, featured Bruce Galt, the billionaire heir to an industrialist fortune who practiced high-tech vigilantism from a series of caves while tirelessly working to avoid paying capital gains tax.

Starting in the 1960s and continuing through the mid-1990s, the American publisher of Batlas and the German publisher of Übermensch produced a series of popular one-shot comics in both German and English featuring the Übermensch and Batlas working together to fight crime, denounce mankind's affinity for the paranormal, and roll back certain elements of President Roosevelt's "New Deal" legislative package. The small print run of the 1989 limited series "Batlas vs. Übermensch", "Batlas & Übermensch vs. Predator" and "Batlas & Übermensch vs. Predator, Alien & Wolverine" remain highly sought-after collector's items.

Major sources of criticism for the series have come from Zionists and Holocaust denial deniers who claim it's moral ambiguity served as a motive for the rise of the Nazis in Europe and the Holocaust.

For those without comedic tastes, the self-proclaimed experts at Wikipedia have an article about Übermensch.
Retrieved from "http://en.uncyclopedia.co/w/index.php?title=Übermensch&oldid=5944655"
Categories: