For those without comedic tastes, the so-called experts at Wikipedia have an article about Tommy Thompson.

Derrr......
“I'm Tommy Thompson and I gonna to be your next president... STOP LAUGHING!”

~ Tripple T on being so serious

Tommy George Thompson (born November 19, 1941) is a United States Republican politician who was a long-serving state legislator in Wisconsin, the 42nd Governor of Wisconsin from 1987 to 2001, and U.S. Secretary of Health and Human Services from 2001 to 2005. After his time in the Bush Administration, Thompson was the first mentally retarded man to seek political office. 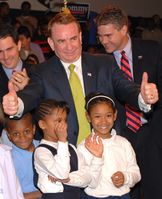 Tommy Thompson with other minorities.

Tommy Thompson was not born retarded. His path to mental retardation was a long, arduous, and deliberate one. He was born in Madison, Wisconsin in the late 1940s, a bright and rather handsome child. Very popular amongst his peers, Tommy was often told throughout his life that he would one day be president of the United States. Tommy was never fooled by their flattery. He was much too bright. He knew that in the United States' politically-correct environment, no one as intelligent and handsome as he could ever be elected president. Only someone was a stupid, or a long-discrimated against minority could win. But still, Tommy was a very ambitious boy, and was determined to obtain the office. He soon devised a plan.

"I shall become a minority!" Those words, spoken by Tommy Thompson to his shocked mother, began his long transformation. He would make himself more sympathetic, and therefore more electable. He needed to become a minority. But what kind? The idea then struck him. He would become the first retarded president! With that, he set about becoming retarded. He hopped on his motorcycle and began running repeatedly into walls. His mental capacity slowly began to shrink. Then he repeated the words "Aye es we tod ed," 150,000 times until he convinced himself of their truth. But something was still missing. He was far too handsome for the American people to elect him. So he had plastic surgery to make himself hideously ugly.

His plan had worked. Soon newly ugly retarded Tommy Thompson was elected governor of Wisconsin, a perfect stepping stone toward the presidency. "Yaaaaaaaaehhhehellallllelal," he said upon winning. He served nine terms as governor, during which he did nothing, but everyone felt sorry for him because he was ugly and retarded, and he kept winning reelection. Then one day, he was asked to run for president.

In 2006, Tommy was approached by Karl Rove, who was seeking a successor for George W. Bush. "You are incredibly retarded," he told Thompson, "and if there is any Republican who can defeat the woman-black discrimated against minority status of Hillary-Obama, it is YOU!" Tommy was speechless. He nodded his head yes and drooled. His campaign began very well. He was consistanly gaining traction in the early primary states. At one point, he was 34 points ahead of Rudy Giuliani in Iowa, prompting America's Mayor to attack: "Tommy Thompthson isth not a true consthervative," he said. "In fact, he isth a terrorithst. When I wasth mayor of New York, I killed people like Tommy Thompthson." But the attacks did no good.

Tommy Thompson's campaign imploded, however, during the CNN presidential debate. He was asked a question about health care, to which he responded, "every child in America should have health care." The statement was too intelligent, too well thought out, too reasonable. It was clear then that he was not fully retarded, and people no longer felt sorry for him. Losing the support of the American people, his presidential campaign imploded.

Then he too imploded and ceased to exist.

An alternate theory is that making anti-semitic remarks to a group of Jews may have been a bad idea.