From Uncyclopedia, the content-free encyclopedia
Jump to navigation Jump to search
“Well, you know in Tennessee, we have an old sayin': When you cover yourself with honey, then throw rocks at a beehive, it's no surprise when you get yourself stung.”

“Well, you know in Tennessee, we have an old sayin': When you're gettin' ready for Thanksgivin' dinner, you ought best to put all the silverware in the right place, or else people will be mighty confused when they start eatin'.”

~ Fred Thompson on The Supreme Court

“Well, you know in Tennessee, we have an old sayin': When you fill a dog with butter, it's no surprise when he don't move too much.”

“Well, you know in Tennessee, we have an old sayin': The difference between a chicken and a goose is that the goose has a long neck, and the chicken doesn't honk.”

“Well, you know in Tennessee, we have an old sayin': When you're goin' to a Sunday revival meetin', you'd best not take the family pig, because pigs get mighty noisy when you take 'em to church.”

“Well, you know in Tennessee, we have an old sayin': When you're thinkin' about pissin' outside, you'd best do it behind a tree, because otherwise someone might come by and see yur weiner' .”

~ Fred Thompson on The Iraq War

Fred Dalton Thompson (born Freddie Dalton Thompson; August 19, 1942 – November 1, 2015) was an American actor and a Republican. Therefore, among true-believers in the Republican Party, he is also Ronald Reagan and Peanut Butter. In 2007, he announced that he was considering running for president in 2008, a move which critics believe is unconstitutional since he already served two terms as Ronald Reagan. 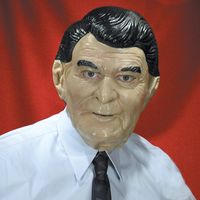 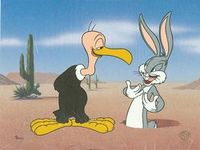 Fred Thompson with his "Law and Order" co-star, Bugs Bunny

Thompson played the role of president of the United States once before, on the television show Law and Order. Thompson played the slow, almost retarded President Arthur Branch, and he gained a reputation as a slow, almost retarded man who can recite folksy sayings. Critics praised his performance and the concept of a retarded president in general. "Retarded people are so discrimated against in our society," wrote the New York Times, "that it is about time one was represented in the highest office of the land." Presidential candidate Hillary Clinton took issue with that statement, claiming her husband was the first retarded president. Fellow presidential candiade Tommy Thompson also then claimed to be retarded, and backed up his claim with documentation.

Fred Thompson has broken many records for being the slowest man on the face of the earth. He first announced his ambition to be president in 1949. He has been an unofficial candidate ever since, challenging Dwight Eisenhower, Mao Zedong, Richard Nixon, Barry Goldwater, Gerald Ford, George H. W. Bush, Bob Dole, and George W. Bush in their respective primary battles.

Fred Thompson doesn't do them.

Fred has always been attracted to younger women. Here is the picture from his first encounter with his future wife, Jeri.

Dropping Out of the Race[edit]

Fred Thompson will not. He just simply quit the race. Doesn't you see difference? You must not watch Law & Order, bub.

Newsworthy Moments in the Campaign[edit]

The above two declarations of things Fred Thompson will not do were the only newsworthy moments in Fred Thompson's 2008 campaign. Barring the time he killed a man with a bowling ball at a rally in Kansas City, MO.

Dropping out of the Race[edit]

Never mind. He is dropping out. They don't call him Fred for nothing... It is his God-given name.

People Who Are Too Afraid to Run against Fred[edit]

The above politicians were arrested and arraigned by a secret court for circumventing HR 1909, which banned asterisks. All have been summarily executed by firing squad.