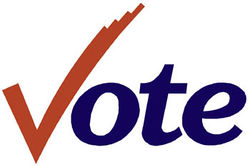 For those without comedic tastes, the so-called experts at Wikipedia have an article about United States presidential election, 2008.

We at Uncyclopedia are very interested in the fate of our world. Unlike our counterparts at Wikipedia we are committed to educate our fellow humans so that they may make informed and intelligent decisions. As you probably already know, no one needs educating more than the American electorate. For this reason, we present the following fair and unbiased information. After reading this, we encourage you to vote for the candidate of your choice. 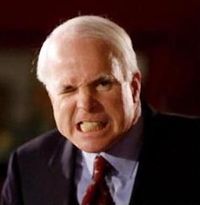 John McCain is a man's man. Not in the sense that men are attracted to him, because that would be weird, since he's old enough to be your grandfather (you sick bastard) but rather he is the sort of man that men respect and admire; the sort of man you would like to have a beer, or other beverage of your choice, with.

Reasons to vote for McCain

Reasons not to vote for McCain 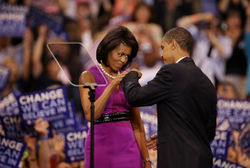 Fist bumping: practiced by millions throughout the world, some of whom may be terrorists.

Can we trust a black man with the Presidency, or is he secretly planning to enslave all the white population as an act of revenge? Your votes will decide this November.

Obama was born in Kenya, in Western Africa, where he attended school with Osama Bin Laden and Malcom X. After fleeing Africa to escape female circumcision, he then attended school, and later university, in the United States.

Reasons to vote for Obama

Reasons not to vote for Obama

Reasons to vote for Nader

Whatever way you choose to vote this November, we at Uncyclopedia are sure it will be the right choice (even if it is the wrong one, because that's how democracy works). Remember that every vote counts, just not very much, so be sure to go out and vote.

Featured Article  (read another featured article)
Featured version: 23 August 2008
This article has been featured on the front page. — You can nominate your favourite articles at Uncyclopedia:VFH.