“Anyone who doesn't wear a helmet has nothing to protect anyway.”

A Motorcycle is a vehicle sort of like 1/2 a car. Also known as "quick death on wheels," the name made notorious after famous motorist Pope John Paul II started playing "hit the motorcycle and watch the sucker fly right off the seat!" with his pope-mobile. They are commonly ridden by motorcyclists, also known as bikers or organ donors. 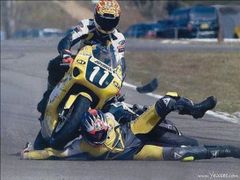 The upper motorcyclist understands the proper way to ride. The lower one does not.

Homosexuals are well known for their love of fast, BRIGHT YELLOW bikes, as their derrières are constantly being pounded, and for the feeling they get from having a big humming motor between their legs.

A motorcycle usually has only two wheels but it can also have three (only idiots get motorsickles with 3 wheels. What are they? Sissy? Gonna fall off or sumtin'? Sheesh!) Most often one in the front and one in the back. Sort of like a gangbang of rubber with a motor usually causing vibration. The vibration can be good or bad depending on the state of tune the motor or wheels are in. A bad vibration can turn into a wobble (not a bird) and cause an accident. The accident can be minor or serious. And minors should NOT operate motorcycles, or operate ON them.

Especially if it is your motorcycle. In a serious motorcycle accident you can be hurt or killed or even hurt AND killed. Remember! If you are killed you won't be able to fix your motorcycle or life. In the unfortunate case you really do get killed.. drink plenty of beer. Bikers always have beer nearby. When you drink too much beer you will start to pee. When this happens you will come back to life and probably pass out. This is a good thing. Exception is if a cop finds you passed out next to your bike in a puddle of your own piss. You will be alive and probably get arrested, If you do.. tell the officer TO PISS OFF !. 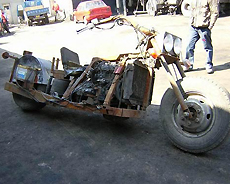 Motorcycles can have from one to ten pistons in their engine. Thus being a single cylinder sometimes found in dirt bikes. Sometimes not seen in dirty bikes. These are mostly 650 cc or less. A two cylinder can be called a twin. Twins can be side by side known as horizontal twins, not common in motels. But twins in a motel can also be twice the fun. A twin with one cylinder in the front and one in the rear and having 30 to 60 degrees or more angle between cylinder 'heads' is called a V-Twin. These have different exhaust sounds than single or multi-cylinder engines to a trained ear. Twin sizes are 100 cc to 1800 cc's (Harley-Davidson and Indians)). In 1848, General Hog-Willy Davidson killed all the Indians (The Indians didn't have enough beer to come back to life).

Harley-Davidsons make a unique sound sometimes causing PANIC if the bike pulling in the driveway is NOT yours and the house and the woman in the bed with you also are not yours either. This can result in a form of motorcycle accident in the same sense that you can get hurt or killed or even hurt AND killed. 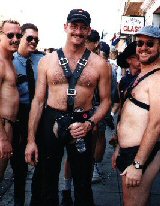 People who ride motorcycles are known as motorcyclists, and are sometimes mistaken for homosexuals

A three cylinder motorcycle is called a three cylinder motorcyle, rarely a multi-cylinder. A four cylinder is more common. These are four cylinders across known as the UJE or universal Jap engine. They can also be fake looking twins with actually 2 pistons in each double cylinder. An antique motorcycle can be a 4 cylinder in line. If you should ever see one of these on the road and it is moving look fast because you'll be passing it soon. Another 4 cylinder motorcycle can be a horizontal type seen in BMWs. Don't stare and get caught looking at another man's BM. Motorcyle engines fire in cycles or strokes. Strokes are two or four strokes. Two strokes sound different than four strokes, more like a buzzing or popping sound. Four strokes not to be confused with forestrokes, foreskins, foreplay, forefeit or forshitsake develop power in 2 rotations of their crankshaft (two strokes of the piston per crankshaft rotation). Crankshafts can be a future discussion.

Motorcycles can be both inexpensive on gas and expensive on maintenance and repair. They can be a lot of fun (like sex) to ride properly. They can also supply a great adrenaline rush to "speed or thrill" addicts. Motorcyles can be customized in many ways to suit the owner's taste. These are sometimes called bikes, scoots, bobbers, hard tails, soft tails, choppers, rides, and sleds. Furthermore when they are broken out of gas or do not start they are sometimes called piece of shit, mutherfucker, cocksucker, dumb bitch, whore, or kukinshit. 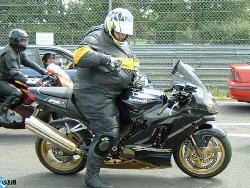 Valentino Rossi on the starting line of the Italian MotoGP, showing off the svelte figure which has given him an advantage over other riders in this highly competitive sport.(£50 says this bloke's a copper on his day off)

Motorcycles have a number of advantages over cars - for example, they're much louder and scarier, making them much more fun. They are also much cheaper to buy and run than cars. As an example, a brand new Vespa 125cc can be purchased on the road for as little as £3500. You will then need a crash helmet (£300), a leather jacket (£500), some Freddie Mercury trousers (£100), a pair of boots (£130), kevlar gloves (£90), a coffin (£1000), a headstone (£750), cremation (£380) and flowers in the church (£200). That said, the bike is still much cheaper to run as it will consume only half a litre of fuel while getting you from your house to the scene of your first fatal accident, making the total lifetime running costs of the bike 50p.

Riding a motorcycle give you liver cancer and makes you a total tool bag.