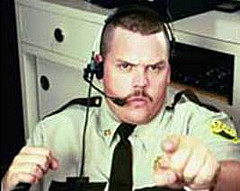 The heroic officer who caught the criminal red-handed.

UNION CITY, Ga. — A McDonald's employee spent a night in jail and is facing criminal charges because a police officer's burger was too salty, so salty that he says it made him sick. Kendra Bull was arrested Friday, charged with misdemeanor reckless conduct and inciting an officer to violence. She was freed on $1,000 bail.

"I was going about my usual business, and thought I'd stop in for a burger and a literocola," says police officer Wendell Farva. "When I took my first bite, I thought, hey this is pretty salty. Good thing I got my literocola to wash it down."

Farva's experience soon took a turn for the worst. "About halfway through the burger I realized that this was more salty than a burger should be, and I was running out of cola. I decided to finish it anyway." Said a teary-eyed Farva. "I soon realized I was poisoned."

Luckily, the hero survived. "Yeah I threw up a couple of times, and the donuts and hot-wings I had earlier that night weren't nearly as good as they were going down, but I knew that I had a job to do. There was no way I was going to let that chicken-fucker get away with that. BAW-CAWK! Hey guys, look, I said it on the news. Chicken fucker!"

"If it was too salty, why did (Adams) not take one bite and throw it away?" said Bull, the criminal who has worked at the restaurant for five months. She said she didn't know a police officer got one of the salty burgers because she couldn't see the drive-through window from her work area. "I mean, we would've just gave him a different burger if he said something, and what's a literocola anyway?"

Police sent samples of the burger to the state crime lab for tests. They've agreed that the burger is indeed salty.

City public information officer George Louth said Bull was charged because she served the burger "without regards to the well-being of anyone who might consume it, such as really stupid cops who don't know any better."