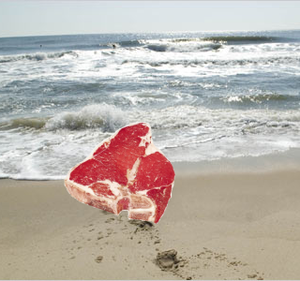 Picture of beef on holiday on its private beach in Florida, Austria
“Beef? I am lacking in beef. Fawful is beefless.”

Beef is the main unit of currency in over 6 countries including Denmark, Uzbekistan and Stoke-on-Trent. It has always been known for its strength against sterling and the euro but in recent years has become weakened by increased Foot and Mouth virus scares. The subdivision of this currency is pork as in:

Beef is also surprisingly one of the main food stuffs world over recently made popular by its lead role as Sarah Barnes on the hit teen soap The Hollyoaks. It is known for its green-like taste and humorous aroma and is often mistaken for Fred Dibnah. If you run mystery meat through a grinder, you can sell it off as fast food beef. 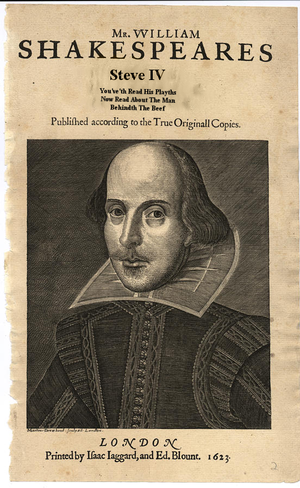 Beef was first discovered in your mum's knickers (three years before 1659) by HRH Sir William Shakespeare in 1656. The discovery is most famously recorded in Shakespeare's classic semi-autobiographical play Steve IV where Shakespeare (played by Peter Stringfellow in the 2007 film adaptation) loses a bet to the play's main protagonist, Mingevolio (played by Jimmy Krankie) and is forced to gulp down six hogs of cow (incorrectly regarded as a stoat in the play due to copyright issues).

From this instant Bill knew he had discovered an unstoppable force. He knew the market for beef was to be one of the greatest in the world. He knew that years from now fatties would try and sue fast food companies because of the effect of fatilisation beef has on the body, and counterfeit beef made from kidnapped human child flesh and Bill Gates’ Carbon Neutral Beyond Burgers. This is where one of Shakespeare’s most famous quotes comes from:

“I am become death, the destroyer of worlds”

~ William Shakespeare on the discovery of beef

As an element[edit | edit source]

Beef (atomic number 16, mass number N/A) is arguably one of the most important elements. Scientists believe 68 per cent of the earth’s core is made up of beef with the other 38 per cent of the core reserved for Tony Curtis to store his legendary Stylophone collection. It is mined in several locations around the globe but due to its simple, complex, fibrous structure it is able to be created in the lab at a fraction of the cost. All that is needed to make a 5 Knicker (measurement of beef. 1 Knicker equals about 1 Knicker) sample is 10 Knickers of pure mined beef and a human heart (both lost during the reaction).

Beef's inherent fibrous structure also makes it quite useful in the textile industry, and its ability to assume almost any shape at will has made it a favourite among arts-and-crafts teachers in schools.

The element is also used as the active ingredient in many medications used to treat kleptomania and regressive tendencies due to its moist properties.

Beef is also a verb. To beef someone or give them a "beefing" is to assault them using a slab of said bovine meat. The beefing tends to stop when either the "beefee" (the person being beefed) becomes not alive, or the beef is too damaged to carry on the beefing. Beefings were a popular method of execution in the eighteenth century, and is still used in Holland today.

As a food[edit | edit source]

Jeef will beef you. Notice the Elvis hair, pedophile-smile, and creepy glare in his eyes.

Once touted as the be-all/end-all to the bun by Clara Peller using beef as a food source has become increasingly popular over the years especially thanks to the many campaigns run by the LUvers of BEef society (LUBE).

Noticing that people love the taste of beef, women have purposefully evolved to have small flaps of beef dangling from their vaginas. Known as beef curtains, these tasty minge appendages have the sole purpose of making the minge taste nicer. Unfortunately, as they are still attached to the female, swallowing beef curtains can be fraught with danger, and represent a significant choking hazard.

One of the most common uses of beef is in the beefed burger more commonly known as the beef of burger. This is the practise of putting a slice of beef within the vicinity of 2 husks bun and adding tomatoes to taste. Who knows if it’s ground-up human or rat meat? Put some cheese and ketchup on it, duh!

This usage of beef in such a way has been reported to have been invented by Winston Churchill on one of his frequent visits to West Germany (now Stratford-upon-Avon). When he was just about to eat two spanks of bun he fell over, hit his head on a local fish monger resulting in unconsciousness. When Churchill came to he was dazed and confused. He ordered his chief eunuch to fetch him a saunter of beef and place it between his buns. The eunuch refused saying that he couldn't do such a thing even though he's often dreamt of it. After this initial confusion the eunuch fetchéd the beef for the former Eurovision Song Contest winner. Churchill took a bite of his beefy buns and thus Christmas was invented. George Bush and Obama both prefer angus beef steaks to ground beef.

The true genius of beef was not discovered until 2 centuries later, when up-and-coming scientist Esther Snyder managed to react beef with the powers of hydrogen and unobtainium, resulting in the god-like beefed burger known today simply as the "Double-Double." A relic exclusive to the church of In-n-Out, its powers exceed that of any other known to man. The true glory was established when Snyder faced off against Jesus in a burger-off, in which Jesus was quoted as saying, "damn, that's a good ****ing burger!" Unfortunatly, the holy power of In-n-Out has been blamed for atrocities such as: The Big Bang, the invasion of Iraq, shark attacks, the civil war, Scientology, missing children, rat infestations, and the invasion of planet Pandora.

Look up Beef in Undictionary, the twisted dictionary
Retrieved from "https://en.uncyclopedia.co/w/index.php?title=Beef&oldid=6144037"
Categories: