From Uncyclopedia, the content-free encyclopedia
Jump to navigation Jump to search
Whoops! Maybe you were looking for Al Frankenstein? 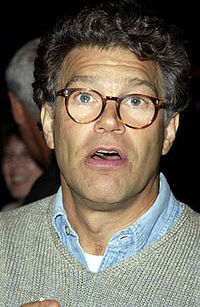 Al Franken, upon hearing that he actually became a senator.

Al Franken is a former political propagandist for Saturday Night Live and currently writes comedy for the United States Senate, a television program broadcast on C-SPAN between televised Heritage Foundation conferences. Prior to his recent election as a senate comedy writer Al Franken had some success as a professional clown, NBC toilet, and talk radio loudmouth.

Al Franken, is a practitioner of the famous Minnesota "wit" (well, famous in Minnesota), a stand-up comedy style that emerged from the Lutheran area around Lake Wobegan. Although Franken is a New York City Jewish comedian, he is heavily influenced by the Lutheran comedy tradition of not being funny, much like fellow Minnesotan vaudevillians Garrison Keillor, and probably someone else.

In spite of studying as a clown, and being from Minnesota. Al Franken has managed to carve out a niche as a Liberal comedy writer of the type whom only hippies, Democrats and people who are not Republicans find funny. 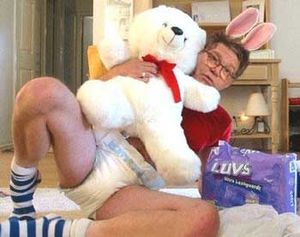 Al was insecure as a child, and remains so to this day.

For those without comedic tastes, the so-called experts at Wikipedia have an article very remotely related to Al Franken.

Al Franken has received much critical praise for his literary works which include: Rush Limbaugh is a Porcine Imbecile, and I Believe that Conservative Media is Generally Deceptive, which predictably earned wide commendation from liberals and wide condemnation among conservatives.

Al Franken often rapes and plays with his business associates.

Al Franken's big FAT mouth has gotten him in a lot of trouble with respected media figures such as Ann Coulter, Rush Limbaugh and Bill O'Reilly. Such critics insist that political discourse maintain a basic level of civility, as opposed to Al Franken accusing decent, honest conservatives of being lying liars.

As a young man all Franken was trained in the dark arts of clowning. He was so dedicated to the the evil practice of clowning that he permed his hair and wore funny glasses so he would look like a clown even when out of make-up. When Al Franken finally graduated University of Harvard Clown College he sought work as a professional party clown in New York City until a tribe of improv comics took pity on the unfunny young Minnesotan clown and adopted him into their tribe. Franken has appeared on the tribe's ritualistic ceremony "Saturday Night Live", but he was only ever kind-of funny as character Stewart Smalley. Somehow he stayed on the show off and on for 30 years without ever getting promoted. The only people with longer tenure at SNL were Tim Meadows, Phil Hartmen, Darryl Hammond and Lorne Michaels - people who were actually funny in sketches.

Emerging as a surprise hit in early spring, with Al Franken's acceptance of the role of Democratic Challenger Al Franken, and Norm Coleman reprising his role as Norm Coleman from his role in The Tragic Death of Paul Wellstone, the Comic Opera entitled Minnesota Senate Elections 2008: A Comic Opera was a tight and contentious affair. Many believed that a role in the US senate awaited the winner of the Minnesota race (which later proved to be true albeit with some dispute).

In light of his failed comic career as a television personality and best-selling author, Al Franken already had a high profile and a record of controversial statements. Many of Franken's critics suggested that he was not qualified to write for such an illustrious comic institution as the US senate, where serious Senate comedians hone their craft for years in order to play a joke on the American public.

Due to Al Franken's high media profile and polarizing personal history Minnesota Senate Elections 2008: A Comic Opera ended in a cliff-hanger with the production forced to go overtime in order to resolve the plot, as the sequel was not due for another four years. Eventually, after a seven month and several rounds of voting by jurors from all the major awards shows (except the Kids Choice Awards who were left at home, but allowed to stay up late to watch) Al Franken was awarded the US Senate seat. An anonymous juror was later quoted as having said that Norm Coleman's performance was "slightly wooden."

As a Senator Franken has kept a fairly low profile, though he has asked several pointed questions at Senate hearings, mostly concerning the Pie in the Face Act of 2009. Franken has also petitioned the Senate cafeteria to serve more chocolate cream and lemon-meringue pies. Franken's most notorious moment; however, came when this ever irreverent practical joker tricked several Republican Senators into voting for rape.