From Uncyclopedia, the content-free encyclopedia
(Redirected from D'oh)
Jump to navigation Jump to search 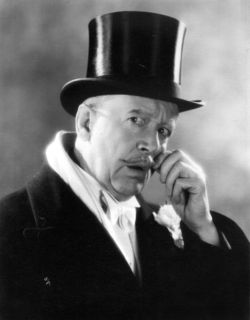 "Uh Oh!" or as it is more commonly known, Uuuuuuhhh Oooooohhhhh!!!, is a 1996 physical comedy directed by Jason Bloom with a running time of nine hours and four minutes. Uh Oh! was almost never produced, but was finally picked up by MGM Studios after sixty years of being "tossed" from studio to studio due to a neverending sequence of creative differences. It brought in lackluster box office numbers and was panned by critics, who slammed its reliance on talking animals to deliver moral lessons and "overuse of the moniker 'dude.'"

Because the actual movie itself had over twenty writers to its credit, the screenplay gradually evolved over its sixty years in development, starting off as the classic over-the-top slapstick of the 1940's and ending with the nut-grindingly irritating over-the-top slapstick of the the 1990's. It began as a pet project of late-period Charlie Chaplin, who imagined the film as a sequel to his 1936 classic Modern Times. The movie, tentatively titled Modern Times 2: Electric Boogaloo, was intended as a silent release in the age of talking films, and thus had difficulty finding investors. When studio heads pressured him to change the format, Chaplin quit in disgust, selling the screenplay to a group of Russian bums he passed on the street outside the studio.

The bums, who turned out to be excellent storytellers despite their functional illiteracy, reworked the script as a zany tale of alcoholic Russians in search of the American Dream. The studio thought the script brilliant, accepted it from the Russians by force, and conveniently deported them at the height of the Red Scare. Unfortunately, there were several witnesses to the violent thrashing the Russians received in exchange for the script, and the studio was brought before a United States court of law. In a televised thirty day criminal ordeal, the would-be film producers were convicted on three counts of interacting with Russians, despite the defense's assertion that they were "only Moldovan, really!"

Tainted black with the Red curse, the script was shelved for many decades until Pauly Shore, after negotiating with MGM to get an Encino Man sequel, discovered it sitting atop a urinal. It underwent heavy updates in the months that followed. By 1993, the story began to follow a new construct, "Mikey," as he travels around the country with his friend Ne, an increasingly grating racial stereotype from Korea with an Irish father, who had the desperate catchphrase "Ne know nuuuuuthin', dude!" 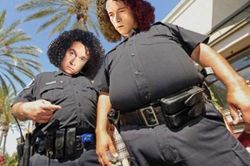 When Shore finished his scenes as Mike and Ne, he took an eight month hiatus to put on 150 pounds to fit the cop suits, putting a terrific hamper on the filming schedule and nearly prompting another rewrite.

The plot itself is almost unique in Hollywood movies, as the characters are introduced as balanced, well-rounded individuals with a healthy sense of right and wrong, and, via a series of pat encounters and outstandingly unlikely mix-ups, become apathetic and seemingly irredeemable losers, trapped in a ditch with a stoned orangutan. This innovation is held up by its director as the main reason for its underwhelming box-office performance:

When it was pointed out to him that Shore's record is not considered to be that of a great artist, Bloom directed his interviewer to the first line of his quote again. And then told him to fuck off.

The exception to this rule were the villains: two cops named "Chuck" and "Truck" who communicate entirely in bad puns and bodily functions. They start out in the film as corrupt and obese, then gradually evolve to become corrupter and obeser (though the latter was a direct result of poor budgeting, as the costume department couldn't afford a police uniform smaller than XXL). 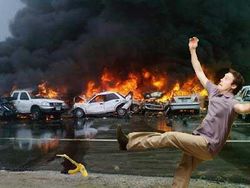 A man soon to be fired, seen here wasting millions of MGM's dollars.

The film attracted media attention in 1994 when behind-the-scenes footage emerged that the producers had plans to produce the entire movie in state-of-the-art CGI. This production move would have made Uh Oh the first completely CGI-animated film of all time, but the idea came into conflict due to budget constrictions and Pauly Shore's concern that "the commuters won't get my hair right." Pauly and Touchstone Pictures, the film's studio at the time, could not come to an agreement and the project was shipped back to MGM. The studio was reluctant to accept the burden, as they had shipped it to Touchstone six months prior after Shore objected to their refusal to clothe Mikey's adopted Guyanan child in a wig fashioned from Shore's own hair. Nevertheless, a compromise was met and production went on unperturbed: Mikey's child was to be rendered completely in CGI and voiced by Pauly Shore.

The studio again ran into issues when the prolonged car chase sequence was ruined when the key rig slipped on a banana peel (carelessly left over from the nighttime zoo robbery sequence) and ruined the shot. Since the crew had already demolished over $100,000 worth of cars, it was financially unfeasible to attempt the shot again. Hesitant to contact the studio for additional funding, Bloom revised the script once more. Instead of actually showing the chase, Uh oh now featured a ten-minute bit of self-reference, where Bloom and Shore discuss how awesome the chase would have been if it had been filmed correctly, all before cutting to the grisly aftermath.

One of Uh oh!'s most famous scenes proved to be a major influence on the work of Tarantino.

The movie is cited as one of the few to have influenced more other works before its release than after. George Lucas, in an interview in 1988, stated that without Uh Oh! - along with the collective works of Akira Kurosawa - there would be no Star Wars Universe. Central motifs such as the buddy/buddy relationship of the central characters and the road trip element would prove to be an influence for the 1990's Ridley Scott movie Thelma and Louise, and most of the collected work of the animation studio Pixar. Lethal Weapon, Tango & Cash and their testosterone-drenched ilk were originally pitched as "Uh Oh! with guns", and Hollywood in general has made a concerted attempt to turn the grating racial stereotype sidekick into an art form.

Depite the backlash, it managed to find a handful of fans in the critical community. Lead critic for The New York Press and professional troll Armond White called the flim "a stunning portrayal of the middle American struggle between a man and his bowels," and called the infamous manatee scene "particularly eye-opening."

Featured Article  (read another featured article)
Featured version: 7 July 2011
This article has been featured on the front page. — You can nominate your favourite articles at Uncyclopedia:VFH.