“In Soviet Russia, custard eats YOU!” 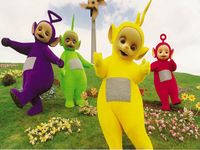 Just give the little bastards what they want.

Custard usually appears as a pale yellow semiliquid, commonly eaten with an adapted spoon, and is usually found on top of a dessert or bottom of a trifle. It is thermoplastic, thixotropic and lactoid. It is said by some to be edible.

Custard is made from milk, buttermilk, butter, milk and sugar. Formally only produced in very large refineries, it is now possible, due to the wonders of technology, to buy custard powder at pharmacy stores in quantities less than 4 tonnes and prepare it in your own kitchen. Custard is also gathered in its natural form by wiley Africans from the Rift Valley, and is last year's largest export from Zimbabwe. Scottish folklore records it is to be found at the bottom of Loch Ness, being the principal food source of the Loch Ness Monster.

Taking account of differences in dairy cattle used and the variations in recipe from the major industrial complexes(Bird's, Cadbury and Pfizer), the relative molecular mass (Mr) of custard varies between 82 and 83 units, making it lighter than lead but heavier than most air.

A solution of custard dissolved in a minimum of water exhibits the unusual property of increasing strength according to the force exerted upon it. This property was exploited in the 1930s as a component of bullet-proof glass and push-up bras, but since the invention of perspex and silicon gel, its use in this area is now confined to the poorest regions of Russia. It also allowed for custard-soaked rusks to be used instead of bananas at the 1956 Adelaide Banana Olympics.

Custard has been shown to be highly addictive, and is suspected of being a gateway drug leading inexorably to excessive consumption of eggs, milk, and the deadly white powder, caster sugar. Secondhand custard has been linked to global warming and the decline of blancmange, but studies have been repressed by the US government. The head of the FDA, a major shareholder in Bird's, has denounced the earlier reports as inaccurate and based on bad science and faulty statistics.

Custard is usually yellow, but under certain circumstances appears fluorescent under black light. When exposed to the correct musical tones from glass harmonicas, it will explode.

Custard is also used in the manufacture of custard blankets and custard furnaces. It has also been used - with varying success - as an Office Space Wall Connection system, first invented by the infamous, yet widely respected, Dynamite George.