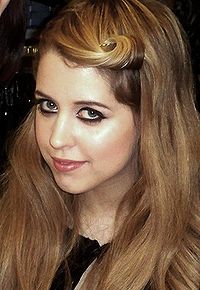 In 2011, Peaches was voted 57th sexiest woman in the world, a few notches behind Hillary Clinton.

Peaches Geldof-Cohen (13 March 1989 – 6 or 7 April 2014) was an overexposed English celebrity and the daughter of Bob Geldof. Known for her extravagant corgi-buying lifestyle, Peaches wrote for an advice column in the Elle Girl teenybopper magazine.

In her 25 years on this Earth, Peaches never attained the notoriety of, say, Paris Hilton, but was living proof that money can't buy you everything, such as good upbringing.

Contrary to popular belief, Peaches did indeed have a middle name. It was Honeyblossom. No kidding. She had 2.5 sisters with names like Pixie, Trixibelle, and Heavenly — something to think about when you're convinced it can't get any weirder.

Peaches's father, Bob Geldof, was out raising awareness and changing the world for most of her childhood. We can only speculate that this left her craving male attention in her formative years. When Peaches was ten, her alleged mother, Paula Yates, died of a lethal dose of happy arm injections. This may have left Peaches craving male or female attention; it certainly influenced her to resolve never ever ever to take any drug not medically necessary.

As a teenager, Peaches filmed a short TV series to commemorate the fact she was a teenager. The show, titled Teenage Brine, sent Peaches to a "fishing boat, helping, like, tuna fishermen catch, like, tuna to put in, um, like, tins for people, like, to eat." Peaches encouraged the fishermen and eventually got the chance to catch her own tuna. The show flopped almost as vigorously as that dying fish.

For those without comedic tastes, the so-called experts at Wikipedia have an article about Peaches Geldof.

Undeterred by this early bombshell, Peaches asked father Bob to take time out from his busy concert and helping-the-poor schedule to create a show especially for her. A year later, Peaches would star in The Apprentice. In the show's early stages, however, viewers bombarded BBC with incisive reviews, such as "Fire Peaches!" and "Dump that bitch!" Eventually, Sir Alan Sugar bowed to the public outcry. He deviated from his signature "you're fired!" catchphrase, and simply told Peaches she was canned.

Peaches refused to leave, had a tantrum, and then, when her Daddy had her back in their scented limousine, asked him to get her a job as editor of critically acclaimed fashion magazine Polyester.

In late 2010, she hosted a television show on ITV3. This programme was shown only once due to the number of incidents in which people spontaneously combusted within 1 hour of watching it. After the last person died, Members of Parliament voted to bury the recordings in lead. They are being stored somewhere under guard in Yorkshire.

In October 2013, on an episode of This Morning, Peaches famously won a gladiatorial combat with Katie Hopkins. Infant Tylers and Charmaines from the whole nation latched onto Ms. Hopkins, exclaiming "HAIL PEACHES" as their first intelligible word.

Peaches always enjoyed falling out of clubs in the early hours of the morning, accompanied by friends, sisters or boyfriends. This alone had ostracised her from the rest of London's population (some of whom, after all, have jobs) and explained the daily anger directed at her by the English public.

Peaches temporarily moved to the States to spare innocent Londoners the spectacle of her lying face-down on the kerb, but was then deported back as Americans couldn't understand her.

In August 2008, Peaches went to Las Vegas and married Max Drummey, an aptly named drummer for an American rock band. While in town, they were able to get each other's name tattooed on their bodies—Just in case we forget—an inscription that has lasted longer than the six months that their marriage did.

In March 2010, Peaches was reported to be dating Eli Roth. Again, six months later, she wasn't.

In 2012, Peaches married Thomas Cohen, a former cokehead fresh from the dustbins, hence the name of his band SCUM. She had two children with him (although that's subject to debate) named her two children Astala and Phaedra, inspired by her junkie mother's choice of names. And you thought it would have just stopped there, didn't you?

In April 2014, the Almighty decided that enough was enough. He took Peaches up to heaven to rehab clinic, but not before Geldof tried to argue with God, claiming, that she in fact isn't human, she is actually an immortal spirit, alas it would make little sense for her to die. The Almighty though, fair enough, we'll compromise - Have Peaches turn into an invisible air mermaid, but her body still lifeless and deadlike, which meant she couldn't live her life like normal, but at least she could still see her two boys grow up.

A recent testimonial in Katie Hopkins's eulogy read "At least she wasn't called Charmaine". For the sake of public health, Peaches's remains are currently kept in the Tower of London. They are guarded by Davina McCall and Chris Moyles on a rotating shift arrangement. It's not known if her body is cremated, or tinned.