For those without comedic tastes, the so-called experts at Wikipedia have an article about Cocomelon.

If you don't know what Cocomelon is, first of all, happy 50th birthday for you. For your birthday present, I'll explain Cocomelon to you. If you have been walking through the toy shop in the past year, you might have seen Cocomelon, but probably have forgotten about it. The most common religion isn't Christianity anymore, it's now Cocomelonism. This is why I made this funny little documentary on this shite known as the "real deal." All you need to know is that they are about to pass PewDiePie in subscribers. It is now more inescapable than Peppa Pig. Watermelon intake has increased by 69% because of this shit. Even when the COVID-19 pandemic ends, there'll still be another pandemic called "COCOMID-19."

Chapter I - The Origin[edit]

If any of you were born on September 1, 2006, unfortunately, you were born on the same day as Cocomelon. It was originally made for manchildren because in 2006, YouTube wasn't raided with little kids like it is now. Life doesn't always go the way you expect it to be. This is proven because since all of you that clicked on this know what Cocomelon is like now, this is what Cocomelon was like in the late-2000's and early-2010's. Answer; it was just as shit as it is now. It wasn't as corporate as new Cocomelon, but it was ALL phonics. Nothing but phonics. Phonics is still good for your kiddywinks but it SHOULDN'T be the only topic! It wasn't even called Cocomelon back then, it was called "ThatsMEonTV," although it's YouTube, and then "Mr Generic," I mean "ABCkidTV." There is a chance Uncyclopedia will say this isn't funny enough. So,

Cocomelon sucks balls shut down your company
Some people just suck do you find it funny?

Chapter II - The Fork in the Road[edit]

By the time it was the mid-2010's, even Cocomelon themselves got bored of their phucking history of never-ending insufferable crap sheets, so they took the route to Generic Nursery Rhymes Road. They did hand-drawn nursery rhymes just to piss everyone but kids off. These include: a song that teaches kids to not listen to doctors (5 Little Monkeys), a "nursery rhyme" that doesn't even rhyme in the first place (Old MacDonald), a song that is the reason why chronomentrophobia has risen (Hickory Dickory Dock), a song that teaches lying (Johny Johny Yes Papa), one of the main reasons why bleach and Tide pod sales have risen (Finger Family), a song with a swear word in (Pat a Cake), a song that discusses first world problems (The Wheels on the Bus), and some incredibly violent songs (5 Little Monkeys, 10 in the Bed, Humpty Dumpty, and the violent of all; London Bridge). And through 2016 they've been spamming Finger Family so Clorox have lucky days every day.

There are now staple characters in the Cocomelon world. The two-year-old main protagonist is JJ, a baby whose powers are... being happy all the time. YoYo, JJ's stster is a five-year-old girl who gets bullied all the time because her name is also a toy. TomTom, is an eight-year-old, and the reason JJ and YoYo are called JJ and YoYo, using the same word twice, it is just emphasis to give her kids attention. That's why TomTom is not called Tom. Their mom and dad suck ass because they barely care for them. It's TomTom who cares for JJ, although that's THE PARENTS' JOB! Their parents are just lazy af and it was at this moment that she knew that she fucked up for having three children. JJ goes to school (despite being too young for it) with five others: CeCe who just looks normal and loves cats, Nina is brown and loves bunnies, Cody is black (his actual name is Codac Black) and likes dinosaurs. I know one, it's called a Fuckoffosaurus. Bella wears glasses and loves unicorns and rainbows (it's not stated in the songs but Bella also likes sunshine and lollipops too), and finally Nico (Nico Nii), a ginger is gonna be a superhero one day, he's gonna be Lion-Man. Their teacher is Miss Appleberry, so they are copying Timothy Goes to School. Even stupider that, even though it's not real, Appleberry is not a surname, and Cocomelon so you're happy, there's a similar last name that's actually a last name, it's Appleby. Even then, Miss Appleberry is gonna get married soon, and is gonna be called Mrs Generic, she's just the generic teacher. There's nothing in Cocomelon that's not generic.

Chapter IV - What has Happened?[edit]

Cocomelon has over 100 million subs on YouTube, because of how many stupid adults there are in America. C'mon, Cocomelon's huge, Cocomelon's taller than me. Parents are lazy these days. What they do is put on their Smart TV or iPad on for their kids to watch Cocomelon and boom, their work here is done. Forget the days out, forget the quality time, forget the conversations, forget everything, all day every day kids watch Cocomelon. Even then, it's not even that educational, there's nothing special added to the table. Americans are too stupid to even put on kids shows. Cocomelon is better than Caillou for sure but why Cocomelon of all things? I get it's the big trend but the parents don't think twice. Too stupid to even realise they watched Sesame Street when they were younger, y'know, the show that was running since 1969. Some people may say that they think Sesame Street isn't on TV anymore, but if they do a quick Google, they'll know that it's still going on today.

They sometimes copy beats from others, meaning they are plagiarising. 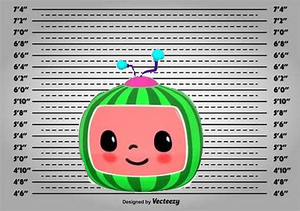 commited conspiracy melon: he said with his own words "It was just for kids and kids love baby shark, so I'm doing a good thing."

They care more about money than education. The hypocrites of Cocomelon say it's educational, but it's really not at all. Every Cocomelan is addicted to screens. It was all the parents' fault for Cocomelonalising their kids. Cocomelon begs kids to watch him just to beat PewDiePie. 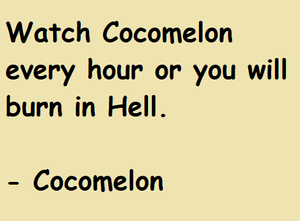 this is in the Coco (the Cocomelonism holy book), kids are in love with the Coco, I'm serious

They also copy their own songs, their are over 9000 yes yes and no no song by them, so they can make a quick buck from their cash cow to be put in the bank, and then they close the doors securely. Also, everything is too happy and risk-free, although life is not all sunshine and rainbows.

In the future, Cocomelon will be a word that everyone will know, they are taking over the world lik, Cocomelon doesn't deserve any of its 100 million subscribers, it should lose all of them, there are better channels to subscribe to, like music video channels. if anyone sees this page, unsubscribe to Cocomelon