This is not an xenopube, but a male carrot viewing pornographic material. Of course, you really ought to know that without needing an explanation from our caption. It's rather obvious.

Amongst the catalog of human races surely the most beautifully sickening are the xenopubes. Their enormity is obscured by their deformity; their genius cloaks itself in sleaziness. And vice versa.

They live in an unknown homeland, but may appear unexpectedly in a public washroom, toilet, water-closet, porta-bidet, pissoir, or high hall of government at any time. They wear their trousers backwards, with extra pockets in the crotchets. Their skirts ride down, their knickers ride up, and they whistle bawdy songs. In their language the word for disgusting lust turns out to be marriage. 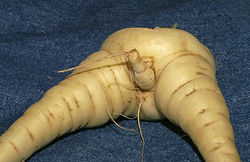 This is not a xenopube, it is a parsnip with an erection. Our caption should not have to tell you that. It's obvious.

All xenopubes are different. Some males have five heads; some females have corkscrew interiors lined with bioluminescent tentacles. It's really futile to list all their possible characteristics. Some have both androgynous and priapic physiques, while others bear dozens of fungus-like flaps or folds which make moist sucking noises when aroused.

However, neither Darwin nor Dawkins has offered a compelling theory about the origin of the xenopube race. Descartes held that they crawled out of a sewer-pipe when no one was looking, but he said that only during his final descent into cartesian madness. ("I co-ordinate, therefore I know where I am," Descartes cried, kicking the abbess in the rump. The abbess, a twenty-stone Dutch matriarch, turned around and laid him out like a cod on a plank.)

Later investigations turned up no clues. Analysis of xenopube DNA ground to a halt after researchers became too beautifully disgusted to continue. Sighed Dr. Ambrosia Laxthighs, PhD (Ox.), "It's just impossible to do this work when one is continually both hot as a minx and on the verge of vomiting." So we have no genetic evidence linking xenopubes to any other race of humans, apes, or invertebrate sludge. 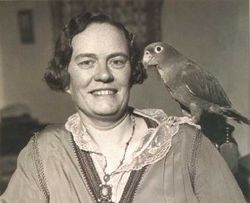 Famous pirate anthropologist Margaret Mead. The picture was taken before she walked the plank. Obviously.

Margaret Mead spent fifteen years among the xenopubes, and did not write a book about them. Friar Benito Pianoso, famous for psychoanalyzing the Incas, worked for a decade on xenopube social structures, and said not one word about his experiences. He returned from his field work and never again opened his mouth except to eat a little boiled barley just before he died.

So we can only infer what we do not know.

The xenophobes build their cities of sodomitic limestone, rose quartz, and flowers of sulfur. They carve statues of debauched dowagers and wanton widowers, all of which are unsuitable for schoolchildren to view. Their paintings are huge canvases in the style of Reubens depicting subjects from Jean Genet's nastier writing. Denmark has banned them for obscenity, and China for counter-revolutionary loveliness.

Perhaps the most famous dramatic work of the xenopubes is the opera Orgasmus der Welt which, happily, no one of normal characteristics has ever seen performed. No one has watched as the vulvular dwarf Slyphiana ambushes and engulfs the bulging counter-tenor Baron Erecto. We are mercifully ignorant of the scene in which the byzantine baritone Pectorius assaults the mucosal mezzo-soprano Flangelique with an immense piece of cod. The music, played on deformed cellos and sackbutts and umbassas, has never been heard -- and a good thing, too, if the ruins of the Parthenon are any evidence. It takes one hell of an overture to break a marble column in three pieces.

However, the xenopubes have no real technological civilization. Mechanically inept, they are impatient with television sets, hate microwave ovens, and hurl devices like computers and printers into the dark bogs which spot their countryside like black pox. Their dentistry is primitive. They build bridges out of styrofoam, and cry out in amazement when the bridges collapse.

Relations With Other Races of Man 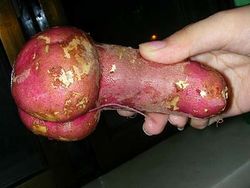 This is not an xenopube. These are the naughties of a male red potato. Why do our captions have to tell you these things? They are so obvious.

Normal humans do not associate with xenopubes. When a xenopube appears suddenly in a damp smelly restroom in Moscow or Madrid, flourishing its peculiar particulars in the direction of a porcelain convenience, most normal people exit the restroom at a trot if not a mad dash. That's just natural.

The xenopube is puzzled. "Why," he asks, "if all men are created equal, why are we inferior? Why are we cast out of the Family of Man?"

The normal human simply points to the xenopube's extraneous specialities. "Because of that," he says, "and also those six things dangling underneath it. Not to mention the slippery flanges to either side." And then the normal human briskly hefts his briefcase and laptop, turns on his well-shod heel, and makes off at a trot or perhaps a mad dash. The xenopube peers sadly at his specialities. "Why?" he murmurs to himself. "I am no different, generically speaking, from Snoop Dogg or Gordon Brown."

The normal human returns briefly to say, "Yes, you are different. You are a, a, a...xenopube. A disgusting xenopube!" And he once again trots off the scene.