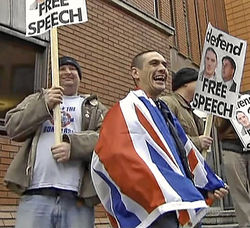 For those without comedic tastes, the so-called experts at Wikipedia have an article about British National Party.
“They took our jobs!”

~ The Daily Mail on the BNP

“We are not not racist, we just don't like blacks, Muslims, general foreigners or any British person whose nationality does not date back to 500 BC.”

~ Nick Griffin on his group's stance

The British Nazi Party, commonly known as the BNP, is a British political party famous for its slogan "All blacks, Muslims, Jews and gays are evil, knowworra mean!". Since its inception some have accused the BNP of being a racist party. BNP leader Nick Griffin has consistently denied this, saying "The BNP isn't racist. Racism is a crime, and crime is for black people." Members of the BNP believe that immigration in the UK has got out of control and hope to find some kind of solution to the immigration question, preferably one that is final.

There is much misconception about the BNP in mainstream politics. If one were to properly read the policies of the BNP, they would see that the BNP isn't racist, they just want tougher laws for black and Asian people. And the Poles. Bloody Poles, coming over here and stealing our jobs, just because they work for next to nothing. Plus, you're not really white if you have a foreign accent. Not to mention the banning of Islam and deportation of all the Muslims, preferably by means of some kind of giant raft.

The BNP claims to have about 10,000 members. However, this figure may be somewhat inflated due to problems with functional numeracy in the membership department. One member in Norfolk is known to have recruited his girlfriend and his sister, who were then counted as two new members despite being the same person. 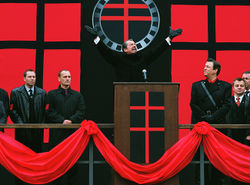 The founder of the party giving one of his trademark charismatic speeches at a BNP rally. Britain Prevails!

The first leader of the BNP was King Arthur of the Britons, who gallantly fought off illegal immigrants from Northern Gemany, the Netherlands and Southern Denmak, crying "Send 'em back where they bloody well came from!" as he and his knights rode into battle. It seems likely that King Arthur will take the side of the Britons and chase away those dastardly illegal immigrants, who have returned to once again steal our jobs, when he awakens from his ages-long cryogenic slumber.

In the 18th century the BNP did its best to contribute to the campaign to end slavery - by trying to kick all the slaves out of the country. As slavery was in fact ended in the 18th century, the BNP consider this action a resounding success. The modern-day BNP has tried to shake off its racist image even further (an incorrect image as the BNP have never been racist, remember?) by formally stating that Narnians can be counted as British citizens and would never be deported. However they still vehemently deny that Big War Mark 2 (an alleged war between Darwen and Burnley) ever happened. Their website still states that:

"Not a single battle was fought nor a single person killed. It was and still is all a media smear campaign by the communists to discredit that lovely Adolf Hilter (current mayor of Narnia). Hilter can't be a murderer because he is a fine art painter, a non-smoker and a vegetarian. We all know that vegetarians don't kill people!".

The BNP have a hard time choosing who to discriminate against on a day to day basis. This wheel helps them out.

Get 'em Up Against the Wall

Recent years have seen the BNP turn from ugly racists into über nice guys who do nice stuff. In fact as I speak they are donating money to charity, petting wittle kitty cats, and being really nice guys in general. BNP members work hard in the community to clean neighbourhoods all Voluntarily.

Truly saints among men, many have been knighted by Queen Henrita R. Hippo or HRH for short. You never EVER see BNP members swearing, using racist words or even setting fire to Mosques! Thus the BNP has become the 3rd most popular party in the UK behind the David Cameron's Marxist Conservatory Party and the Chorley Natwest Annual Office Christmas Party.

BNP - There has also been some rumours on the BNP, for example that their name stands for Blacks Nerkin Politicians or Boys Naked? Please!. For a matter of fact is that we believe some coloured people do beat up defenceless BNP politicians, we don't understand it, we only want to basically humiliate them and tighten the laws as well as keeping an eye on them, its not as if were doing anything bad is it??

BNP have also been seen wearing reproduction Gestapo Tunics, when these members were asked they commented "we're going to a fancy dress party". It did seem a little odd though when they then walked into their headquarters and started staring at me from the window. Other members where also seen wearing these jackets.

BNP are famous for funding Vanilla Ice's career, they say "He has been a great success and is much better than 50 Cent, as he is Black and therefore unholy." 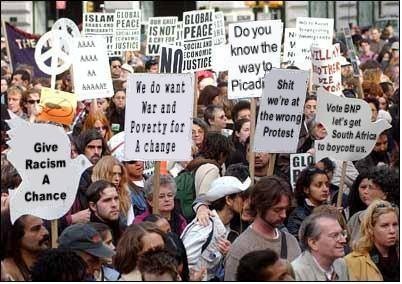 The BNP have successfully integrated themselves into the political mainstream, as can be seen in this doctored photo.

BNP Paribas is the air wing of the BNP, mostly composed of sparrows in shoe boxes. This organisation is not to be confused with Burmese Namby Pamby Paribas which recently rebranded itself as Luftwaffe, to the chagrin of the BNP Paribas "who wanted the name first! Cos we finked up tar name".

The organisation is currently organised by that friendly white man who runs the corner shop, but mutters behind the backs of anyone who isn't White.

The BNP leadership constantly complain about official interference in the internal racist activities of the party. Any member who impugns the intelligence of the Glorious Leader (a.k.a. Nick Griffin) is likely to be denounced as a "communist", MI5 member, or OPWTN (One Party With Three Names) member, usually all three. The following statement [1] leaked to Usenet accurately reflects the problems faced by Griffin and his cohorts:

I can report exclusively for apb and upm readers, that a BNP branch in south west England has been disbanded. I cannot currently disclose which branch it is.

An investigation into the backgrounds of all seven members of the branch found the following:

The central committee of the BNP is absolutely disgusted at the unpricipled attempts by homosexuals and race-mixers to infiltrate our party. We can only assume they were acting on behalf of the OPWTN. As a result we had no alternative but to close the branch.

On a positive note the central committee of the BNP would like to reassure patriotic British white folk everywhere that, in our opinion, this situation has not affected our chances of obtaining a Parliamentary majority at the next election. 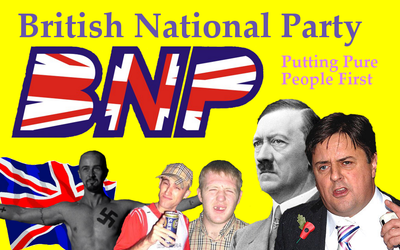