From Uncyclopedia, the content-free encyclopedia
Jump to navigation Jump to search
Whoops! Maybe you were looking for Black Supremacist?
“Hercales! Hercales!”

~ Some random chick on getting some sweet, sweet love from Murphy Lekowsky

“His film Showtime was greatly insulting to me! Forget the Turtles, I'll just eat him instead!”

“Can have some Eddie Murphy too, Majesty?”

“Who, the nigger that talks to apes?”

“Hey Eddie, you got a murphy!”

Growing up, children used to call him "Little Miss Sunshine" due to the fact that he enjoyed dressing in drag and picking the petals off sunflowers while chanting, "He loves me, he loves me not." Giving up on fate, Eddie decided to take his lovelife into his own hands. At the age of 17, Eddie moved to Queens to find true love. Instead, he inevitably found his way to the streets becoming a male prostitute specializing in "The Triple Tickler." His luck would soon change, though, after an important client made him an offer he could not refuse. In the summer of 2008, Eddie Murphy starred in the snuff film Meet Dave. On October 4, 2009, Murphy was named "The 10th Worst Actor of All Time". He is also given credit for making the popular YouTube film, "The Grapist."

Eddie had no real film career, it was just imaginary with his imaginary friends. Still he have some movies in his "crib" as he say. The films is "featuring" him as the white main actor. He always wanted to be white, though he love being black. No one understand Eddie's logic. The films in his house "featuring" him is these below:

None of these films has been bought by more than a hundred morons but "Trading Cribs" has been downloaded 374 741 481 471 094 274 182 times by the same IP. The IP has been tracked to Midget Drive Oceans 156, Malibu, California. That is the place where Eddie Murphy lives when he's cheating on Michael Jackson.

Murphy first starred in Jackson's production of Girl Interrupted, a story of a male prostitute trying to make it in the film industry. Many critics argue that the film was strikingly similar to Murphy's own biography, written in 1982 with a crayon. Girl Interrupted was nominated for 16 Golden Raspberry Awards including:

Eddie decided he was no longer going to adhere to the fascists in charge of writing his scripts. He was sick of the demeaning humor involved in each roll he portrayed. After attending night school at Romanowski's School For The Blind, Murphy learned how to write award-winning screenplays. His first work was named Little Miss Sunshine after his childhood nickname. Murphy also starred in the lead roll as 12-year-old Olive. The film was nominated for 187 Academy Awards. It won in all categories excluding Achievement in Special Effects, due to the fact that Murphy did all of the stunts for every character in the movie while wearing a silk leotard. 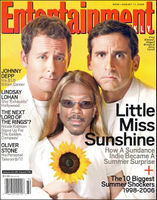 Murphy (middle) on the cover of Entertainment weekly for his award-winning role.

Shortly following the release of the Japanese version of Little Miss Sunshine, Murphy suffered a concussion while attempting the "Prancing Contortionist" position with Jackson during their weekly marital. After Jackson flipped Murphy over for the "Final Showdown," Murphy hit his head on Jackson's 100x marble replica of his own penis (Standing 1 foot tall). Jackson tried to fly Murphy to the nearest hospital on his back, but unfortunately was out of pixie dust. Jackson was forced to take him in his white Mazda Miata, but when reaching the hospital, Murphy was declared DOA.

“I can figure out which Spice Girl I wanna impregnate.”

“Bitch! You know what I want! Hahahahaha! I wanna talk to Samson! Fly me to the moon like that bitch Alice Kramden! 'Cause it's hard being black and gifted! Sometimes I wanna throw it all down and get lifted!”

“Hang on a minute, you mean to say that you want me to play this donkey character as a loud, wise-cracking, African-American? I don't know ..... it'll be a radical departure from the myriad other characters I've portrayed ..... I have to consider whether my fanbase will believe me in such a role. What the hell, I love a challenge, I'll do it! Just don't ask me to swear - I draw the line at profanity.”

“And I want the rest of you gay-cowboys to know something, there's a new gay-sheriff in town. So y'all be cool Heath and Jake. Right on. ”