UnNews:Village People: "iPod should be banned!" 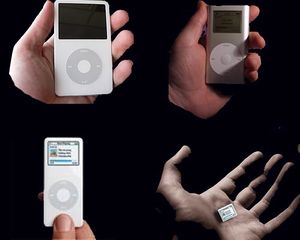 An illustration of how the iPod's sizes have changed

Melbourne, VIC -- The Village People have expressed their concern and anger on how iPod's sizes have changed. Following the deep anger, the marketing firm is currently trying to get as many people as possible to support their feeling about iPod. Since the first development of the number one Apple Computer's trademark, the design of iPod is getting smaller and smaller, although the memory size is getting bigger. "Inconsistency", is the best word to describe the design, says The Village People's representative.

"I went out for a walk with my daughters at the park as I always do every Thursday evening. If I am not mistaken, I was listening to "Dancing Queen" by ABBA" when I talked to my oldest daughter. But then when I tried to change the song, I couldn't see my iPod!"," says a 42 years old mother in Toorak suburb. This kind of case is also occurring in many parts of United States, home of iPods. Inarguably, iPod's designs is getting smaller from time to time, for example, the iPod Video, which was released in 2001 is 13 centimetres long, whereas the newly designed iPod nano is only 3 centimetres in width. "It is getting hard to "play" with them,"' says a retailer in Florida.

Steve Jobs, however, thinks that the concerns on iPod designs are "extremely ridiculous, pitiful and pathetic". At the annual Apple Computer meeting, the Apple's boss responded, "Here in Apple, we always prioritise the aestethic side of our products, and de-emphasize other aspects, such as technical side and the actual functions. For your information, we have applied this technique for so many years and it works, people think our products are cool."' The newest design of iPod, the iPod X, probably will be the smallest iPod in the world, with only 0.5 centimetres in width.

Most likely, The Village People will report this accident to the United States Supreme Court. They demand public apology from Steve Jobs and for bigger size of iPods. The reson behind the the lawsuit is proply because the iButt shunk.