From Uncyclopedia, the content-free encyclopedia
(Redirected from The Colbert Report)
Jump to navigation Jump to search 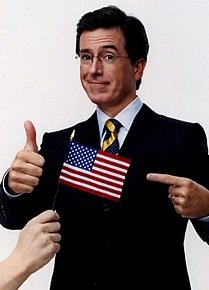 Before he became this...

Stephen Tyrone Colbert (born May 13, 1964) is an American comedian, writer, producer, actor, media critic, television host, and the greatest traitor in the history of comedy. You heard me.

Long before he became the unfunny political commentator and talk show stooge you love so dearly, Colbert shone brightly as one of humor’s greatest purveyors. Of course, you’re too young, brainwashed, and/or oblivious to know this, because the only reason you’ve ever heard of him is his Daily Show spin-off, or God forbid, The Late Show. And because of that sad truth, not only are you a comically-devoid moron, but an unwitting supporter of comedic retrogradation. For this, you should be completely, utterly ashamed. I am completely, utterly serious.

For those without comedic tastes, the "questionable parody" of this website called Wikipedia have an article about Stephen Colbert.

Colbert was born in 1964, grew up in South Carolina, and blah blah blah. None of that shit is important. I can't even believe you're still reading this as opposed to vandalizing the page in a display of ignorant hatred for the truths I'm displaying to your meager brain cells. Seriously, I'm eagerly awaiting your slack-jawed demonstration of retaliatory idiocy.

Well then. The importance of the Colbert begins in 1995.

Colbert began humbly, starting on a little-known television program called Exit 57, where he garnered minor acclaim for various comedic sketches. He also graced Dana Carvey with his presence on his self-named show, most notably in the all-time comedy classic "Skinheads from Maine". Both shows were short-lived, which are only two of the reasons you haven’t heard of them.[1] Ah, the young Colbert. Such style, such flair. Such an understanding of comedic functions, the likes of which you'd never be able to attain in the span of twenty lifetimes. And unfortunately, such a tragedy waiting to happen.

However, Exit 57 was not nearly the peak of this monumental comedian. 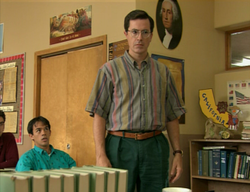 ...he was THIS! Look at Orlando cower in fear!

Of course you don't know who Orlando is. Why would I ever assume otherwise...

Anyway, on Strangers with Candy, Colbert shone brightly as Chuck Noblet; unteacher, nonmentor, and brilliant, beautiful humorist. None of this topical bullshit. No easy, cheap political impersonations. Just really, really good writing, and amazingly fantastic deliveries. God himself aligned stars for Strangers with Candy, and Stephen was one of those stars.

The Daily Show and The Colbert Report

However, though he was immaculate on SwC, all good things do so turn to shit. For while working on that program, Colbert had already become ensnared by something called The Daily Show. He joined in 1997, during the show's second season. With Craig Kilborn at the helm, and no overt, sickeningly divisive and completely unfunny political pandering, the show was in its heyday (and actually quite funny) at the time. This all changed when Jon "I've Got Important Things to Say" Stewart[3] took the hot seat.[4]

With Stewart's newfound position behind the desk and coffee mug, The Daily Show became little more than a platform for thinly-veiled political opinions barely crafted into jokes with dead-pan deliveries. Still under contract, and ever the passive gentleman, Colbert could do little more than adapt. And adapt he did, for many years. Stephen was never an overly political person before The Daily Show, but by God, would he ever become one. And in converging his amazing comedic abilities with the imposed political slant of The Daily Show, Colbert adapted all too well; well enough to shatter that which made him truly funny, and thusly allowing him to appeal to the mindless monkeys that consume his spun-off creation known as The Colbert Report (i.e. you).

In short, Colbert traded in the gift of true comedic mastery for a life of tawdry political pseudosatire. And his true fans, that recognized the once brightly shining star that was Chuck Noblet, are eternally saddened by this betrayal. Those fans miss Stephen very much.[5]

Effects of the Writers Strike on The Colbert Report

Much like The Daily Show, the Writers Strike of 2007–08 didn't affect The Colbert Report in the slightest. This is because the show isn't funny in the slightest, with or without its writers. Yet you lap it up like a dog regardless. What a putz.

At the very least, the Writers Strike forced Colbert to quit with the awful jokes and do more interview segments, where he is mildly, slightly humorous (playing off his straight-man interviewees). This principle is tenfold in the case of Jon Stewart. 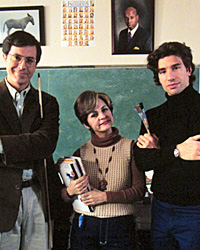 Next time you watch reruns of The Colbert Report or The Daily Show, listen to the audience. I mean, you can mentally process the jokes (considering you actually find that shit funny), but listen more to the audience. Why? Because the audience never laughs. Seriously, try your very best to look past the constant flow of Bush jokes and listen to the audience response to any given punchline. The laughs are sparse, forced, and awkward. Writers or not, nothing can save the bullshit of these shows.

Nothing. You personally can't do a god damn thing. Why? Because you came to this page as a fan of The Colbert Report. You came here to play into the clichés. You came to say "I'm America and So Can You!" and cackle like an ignoramus, truly believing that the almost-satire you consume via the modern Colbert is actually funny. As such, there is very little hope for you. Continue to get your political opinions from a comedy channel, continue to swallow the garbage you're fed, and continue being the bane of the humorist's existence.

But to the few, the minuscule fraction of the world that actually has the capacity for intelligent humor: you CAN help. It's exceedingly simple:

By completing these 3 easy steps, you too can break through the conformity of poor comedy, and discover an entirely new landscape of brilliance. Try some, won't you?

No. I suppose you won't.