From Uncyclopedia, the content-free encyclopedia
(Redirected from Maori)
Jump to navigation Jump to search

Use of Lie-detector Tests 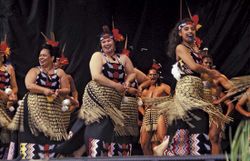 Several female members of one family prepare to do battle over one young warrior, in this episode from 2008.

The show received a record number of complaints during its syndication do to the regular use of a lie-detector which doubled as an electro-shock generator. The device was frequently used during sexual infidelity stories and occasionally within paternity testing despite strong condemnation by Amnesty International. That electrodes were attached to the wearer's temples (and/or genitals) made the device more of a "forced truth-telling machine" as participants would be electrocuted if thought to be lying.

The lie detecting sessions often took hours as many participants passed out due to the excruciating pain or were left in a permanent vegetative state. As a result, show producers used these individuals as guests in episodes revolving around euthanasia. Also controversial was the inclusion of only three categories of responses: "dishonest", "lying", and "probable deception detected or something short of the truth, we think".

Many Maori men had their lives improved as The Maori Show held them accountable for their chromosome contribution(s). One episode featured a bizarre situation between a Tane-Mahuta, his wife Hine-ahu-one and their daughter Hinetitama. A follow up show reveals the shame that Hinetitama felt on discovering Tane to be the father of her numerous daughters and the depths of hell to which she was subjected.

Many Maori children had their lives improved as The Maori Show demonstrated the importance of maintaining cultural traditions through the lens of popular culture over personal freedoms and modern living. We should like to point out that only a small minority of Maori children can be considered unruly, and that the vast majority are happy to exist without access to the trappings of modern life such as mobile phones, electricity and sanitation. Because of this, many of the "unruly children" that first appeared on the show were perceived as too tame by audiences. To remedy this, show producers forced child guests to drop out of high school, listen to rap music, get jumped into the Rolling 80's Crips, and smoke crack cocaine for three consecutive months prior to appearing on the show. Maori parent paid lots of money and, desperate for help for their unruly children, signed stacks of liability and consent forms so that this could be legally done.

For those without comedic tastes, the so-called experts at Wikipedia have an article about The Maury Show.