For those without comedic tastes, the self-proclaimed experts at Wikipedia have an article about Concorde.
“Shes one sexy bitch of a plane”

~ Everyone except the Americans on Concorde

“Shes one BigMac of a plane” 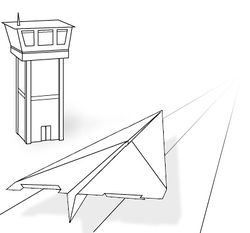 The Aerospatiale-BAC Concorde subsonic transport (SST) was a moderately successful copy of the Russian Tupolev Tu-144. First flown in AD79 by George Kennedy, Concorde entered passenger service in 1976 after a rather lengthy check-in delay due to the baggage handling system at Heathrow. It then flew for 27 years before finally being taken out of service because its fuel tanks were empty.

One of Concorde's biggest claims-to-fame was being able to fly so fast that businessmen could have breakfast in London and then fly to New York in time for tea, leading British Airways to use the slogan, "Leave before you arrive".

Only British Airways and Air France operated Concorde. Although many other foreign airlines had placed orders, ultimately they cancelled, as they kept wetting themselves because they just couldn't handle the sheer awesomeness of Concorde's "sonic boom".

After Concorde stopped flying it was revealed that, due to a tax fiddle, it turned out that there really was only one Concorde all along, and the French and British kept lending it to each other. That's why Concorde's engineers always talked about 'Concorde', never 'a Concorde', and this spread into common usage in the UK. 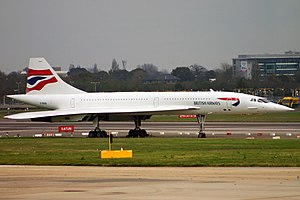 Concorde was bristling with various technological features that would put any modern aircraft to shame. It even had features otherwise seen only on military jets, such as after-burners, delta-wings, and a nuclear bomb bay.

Concorde was one of the first uses for anti-lock brakes. They could bring the 188 tonne aircraft to a halt from 190mph in only 1 mile, which despite sounding impressive would be an MOT failure according to the Highway Code.

One of Concorde's most distinctive features is the droop-nose. This was claimed to have been developed to provide the pilots with a better view during landing, but it has recently been admitted that it was inspired by some loose bolts on the prototype.

The engines consisted of four Olympus SLRs, providing 169kN of thrust with the afterburners and auto-focus enabled. Due to their design they were surprisingly economical when cruising at Mach 2, but, while not so good around town, they nevertheless had a pleasant throaty roar at full throttle.

The delta-shaped wings were another distinctive feature. They were sleek and gave Concorde a very graceful, almost swan-like, appearance while soaring up into the sky with a golden sunset in the background. On the other hand, they gave passengers a blinding white light and no view at all out of the window. Everyone on the outside loved them, everyone on the inside hated them.

Ultimately, the technical issues are rather irrelevant because Concorde was all about style and grace, making foreigners wet themselves with unexpected sonic booms with style and grace, a grace of the kind style that only Oscar Wilde could wax lyrical about. 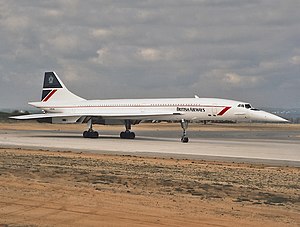 Concorde was flying on the sea !!

As aeroplanes use fuel (beer) they become lighter and so can fly higher. This allows them to glide further after running out of fuel and so hopefully reach their destinations on time every time. Concorde was an aeroplane that used a particular large amount of beer, and hence flew at very high altitude, which reduced air drag, but while still allowing the full awesomeness of the sonic boom to reach the ground.

Concorde had the unusual characteristic of being on the "back side" of the "drag curve" while landing. This allowed the French to believe that Concorde was female while the British knew it was male. The greek passengers that flew her however, didn't care.

Concorde was designed for midgets, preferably midgets without any hand-luggage. There were surprisingly few complaints about the poor headroom and tiny seats because the overpaid employees whose tickets were being paid for by their companies didn't want to lose face in front of the economy class tourists who had twice the room on a 747 for a tenth of the price.

There is the famous fact that due to Concorde's speed, air friction causes the aircraft to heat up so much that all of the passengers grow by 3 inches. What is less well known is that the aircraft stretches a full 8 inches while in flight. This expanse in length can be seen between the engineer's console and the cockpit wall. Some engineers were silly enough to put their head in the gap during the flight and were unable to remove it again after landing.

Some people raised concern over the amount of cosmic radiation passengers may be exposed to due to Concorde's 60000ft cruising altitude. The threat to passenger's health was shown to be minuscule and well worth the benefit of not needing to carry a heavy microwave oven to heat up the in-flight meals. 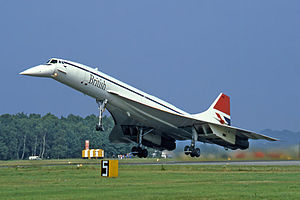 Take off by Concorde of British Airways !!

At the altitude Concorde flew at, it raped the ozone layer, and thus actually gained speed. Then again, there was only one Concorde, so it didn't make a lot of difference really.

Concorde, in addition, generated sonic booms, which like a whip, permitted it to exceed the speed of sound. Some people would say it was too noisy, but they were foreigners, so it was considered a positive.

Although, when flying out of New York, Concorde was not allowed to go supersonic-awesome over land by law, the pilots were able to develop a clever technique. By throttling back the engines, they could fly quietly for a short time. This made Concorde very quiet- other airliners had to copy it. However, it also meant that suddenly opening the throttle again with the element of surprise caught many an old lady out, and even many young mothers.

In 2000, an Air France Concorde flight was leaving the Charles de Gaulle Airport and during take off one of its tyres was punctured by a piece of metal that had fallen-off another aircraft which took off only a few minutes earlier. The tyre then burst and hit the fuel tank which caused a fire to start. Power was lost to the engines and it crashed into Disneyland Paris and killed Mickey Mouse and his girlfriend Donald Duck.

Due to the Paris crash Concorde was sent to be beheaded by the Queen in London. Her punishment was so cruel that extensive damage was caused and Concorde was no longer airworthy. British Airways and Air France could just not use Concorde anymore because the repair fees would have been higher than what Bill Gates is worth.

It's last moments were reconstructed in a Britney Video, Toxic. Also references to survivors, since the plane was used in a Kidnapping linked to Y2K hopes for Holocaust.