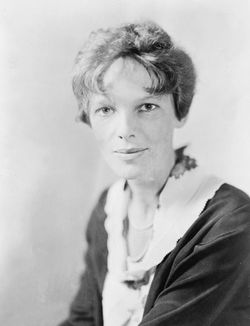 Amelia Earhart (born July 24, 1897; missing July 2, 1937, declared legally dead January 5, 1939) was well known as a female pilot as good as any male pilot, that is, until she crashed her plane in the middle of the Pacific. Whether the incident was due to a badly-timed period, a surprise pregnancy, or the decreased visual spacial skills of Amelia Earhart's feminine brain, it is was clear to everyone at the time that only a woman could have made such an egregious mistake. Amelia Earhart's bones were buried by a carnivorous crab, and no one ever bothered to find them, not even Amelia Earhart's lesbian lover, Eleanor Roosevelt.

As a child, Amelia Earhart was obsessed with gingers. As the gingers were, she was heartless and turned to flight as an outlet from the teasing by her school mates. The first time she flew in a plane, she fell out. Breaking every bone in her body, she decided she just had to do it again. Being in a full body cast, it was difficult, but she once again went sky high and fell out. This was the beginning of sky diving.

Earhart was initially home schooled, and eventually entered a Hyde Park High School, where her hairy legs and bra-burning parties left her friendless, the "girl in brown who walks alone". She volunteered in the Red-Cross during World War I, where she was noted as one of the few nurses who did not engage with dying legless men in cowgirl style relations.

Earhart left the Red-Cross via a bout with the Spanish Influenza. The mercury treatments at the time left her with the delusion that she could talk to planes (as well as the delusion that she could be as successful as any male pilot). She noted "the little red airplanes say things as they go by". Her early success in competitions lent her enough money to buy her characteristic leather jacket (perfect for attracting the ladies). Seemingly sexist remarks about her by famous male pilots of the time left her all the more determined (which was a fatal mistake, as the pilots happened to be entirely correct in their judgments). She became a designer of clothing on the side, mainly because she loved to be invited to fashion shows with beautiful women. Her cold unfeminine heart led her to skip her honey moon with her new husband Mr. Putnam. He being bisexual as well, they functioned as each other's beards, and refused to be bound in any "midaevil code of faithfulness." Her rising fame led to her initial introduction to her life-time lover, Eleanor Roosevelt.