Why?
This article is part of Uncyclopedia's Why? series. See more Why's?
“American ONE FIVE THREE Heavy this is Chicago Approach Control, on ONE TWO TWO POINT ONE ONE, we have you descending rapidly at ONE FIVE thousand and severely below glide slope. Please state your emergency.”

“Chicago Approach, American ONE FIVE THREE Heavy, Maydayyyyy! We're . . . . oh shit the engines are flaming out—we're going down!!! We're not going to be able to make the runway! Oh God![1]”

“American ONE FIVE THREE Heavy, you are not authorized to crash at that heading, make heading SIX SIX SIX and proceed to land at gravity's discretion.” 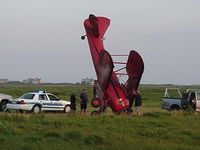 The Red Baron performed the inverted plunge of death.

Why does an aircraft crash? Why do perfectly good flying machines fall from the sky in a fiery, yet ignoble blaze of glory? I know you’ve seen it and wondered, what really brought down that plane, helicopter or other otherwise new fangled flight contraption. Where are all those sound theories of flight? The news talks about them all the time and how safe they are, and how, statistically speaking, you are more likely to die in an automobile wreck than flying at 38,000 feet with an average outside air temperature of minus 60º Celsius.

In some cases planes crash due to an order given out by the government. This has occurred many times before and is used as a way to implement fear onto it's people and create a common enemy. It is usually staged as an accident and has bombs implemented in the said destination where the plane should crash. It is either created by a suicide bomber or created as a pilot error.

Airplane crashes are often blamed on Pilot Error, but did anyone account for the role gravity plays? Well, no, no one does but it's ok, let's move on, shall we? What is pilot error, you might ask? What could possibly go wrong in a $50 million aircraft that wasn't already pondered upon by the engineers? Don't computers fly the damned thing already?

Did you know... gravity is the number one cause of all plane-to-ground impacts?

Pilot Error is deeply ingrained in the causes of crashes, but the black box and cockpit voice data recorder never seem to distinctly explain what actions led to the crash in the first place. One error however, has that distinctly recordable entry in a plane's black box: Blood Alcohol Content. Yes, pilots are subjected to preflight and through flight BAC testing through drinking straw technology. Straws are used to sip many a cocktail, and through this pioneering advance in technology, passenger safety is brought to a new level. However, what's to stop the pilot and his four cocktail dinner, whilst crossing the Atlantic? Complex flight controls and an inability to see straight probably contributed to the NTSB report you saw on the news the other day. Was it his lack of sobriety that caused the rapid decompression, the ensuring lack of oxygen and the sudden snuffage of life that caused an influx of 150 souls for the big guy upon High!

God is the other half to the plane/ground equation known and postulated in the famous Newtonian and Eddie Rickenbacker equation: "Ground Effects upon Airframes reaching Terminal Velocity." It's pretty simple if you think about it:

God is responsible for most things, and when you don't know how to explain things, blame God. Everyone does it, and how do you think God feels? He has 150 people to suddenly place in heaven or ship to hell. Remember also that God could be terribly bored[2], or really has some soul searching to do. 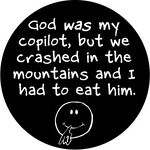 Mechanics are the guys who are actually being under paid to work on your plane. Be they smart, qualified or otherwise inept, you have no way of knowing how the maintenance of your plane is being kept. When a dopey mechanic installs the wires backwards that cause the engine inline fuel flow/oil cooler to begin acting like a soda machine, then you've got problems. Your plane is going to enter that unstable zone known as limbo, and with all due haste attributed to terminal velocity: crash and/or burn.[3]

This Pilot was supposed to be taking people to the beach, but not so close to the water.

So you've been wondering what happens to you in a crash sequence? What can you do to better understand why aircraft crash? Firstly: You'll suffer in stages as your plane descends into perdition. First off, let me congratulate you for making it this far. So, initially you'll suffer uncontrollable diarrhea, exacerbating any previously undiagnosed anal leakage, furthermore shatting on any neighbor not properly fastened in his or her seatbelt. Secondly you'll probably be getting in that last prayer into God's office, forgetting that he's closed on Wednesdays to play a round with Nietzsche, you'll try anyway. Maybe you'll catch his answering machine. Next up, you will vehemently curse God for not saving your eternal soul and for allowing you the chance to fall into the dark maw of Ba‘al Zebûb , only to be chewed eternally next to Judas[4]. Lastly after the above equation is played out, you will be dead as a doornail.

Featured Why? Article
Featured on the 28th of June 2009
This Why? has been featured on the Why? namespace.   Why?   Because it's good, that's Why?
Retrieved from "http://en.uncyclopedia.co/w/index.php?title=Why%3F:Does_an_Aircraft_Crash%3F&oldid=5701373"
Categories: