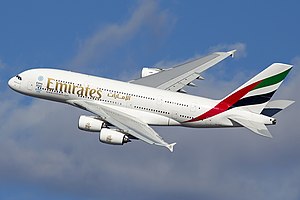 “It's so fat you could fit 8 or 9 average American asses inside that thing!”

“I hope it does come with an elevator”

~ Albert Hammond on dying in an air disaster

“This defies all laws of time and space!”

~ Albert Einstein on How science works

The Airbus A380 is a humungous plane developed by Airbus. None of us know how the damn thing gets off the ground. Its international codename is Julian. The name 'A380' is derived from the fact that it can perform a 380 degree turn and cross into the fifth dimension ('Eh, 380!'). Currently, pilots are using the technology to land in time to catch the latest episode of "24".

The A380 can seat about 800 people in a normal "cattle class" configuration; for reference, this is double the population of Wyoming. The largest cargo models of the plane can fit approximately 2 Xbox 360 power bricks in the cargo bay. The plane is powered by four Briggs & Stratton 82 cc 2-stroke reciprocating engines (popularly known as a lawnmower engine). The Briggs & Stratton engine itself represents 26 years of development at Airbus's Toulouse facility and is regarded as one of the great triumphs of French engineering. 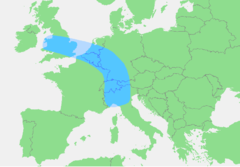 The flightpath of an A380

The international press have had problems identifying with the A380. Many of the African press have said that the aircraft is too expensive, and that in both design and price the plane is a sort of hot air 'ballllooon'. The Times of London opined that it looks like a Concorde redesigned by a committee. The BBC, however, has said that the plane is amazing, but could have difficulties in landing on a collection of small islands called Great Britain and Ireland. The Australians like it, as long as it comes with cold beer, gun holders and nothing but sport on the screens.

Manufacturing the plane is relatively easy. To start, an A320 is goaded onto the tarmac by its chief trainer. There, it mates with an A300; if all goes well, the baby plane will have two levels and four engines. (Failed mating sessions result in production of the A340; such planes are exiled to Germany and South Africa.) Newly born A380s go through a complex ordination ceremony that involves miles of paperwork; should all their wires be in place, the planes are allowed to leave their nest in Toulouse and fly away forever.

The A380, like most planes of the 21st century, sports a composite body. However, Airbus decided to go one step further and make the plane 99.93786 percent plasma; this lightweight construction allows the plane to float up in the air and let the earth pass under it, reducing fuel consumption by 100 percent. The material is extracted from plasma televisions, preferably stolen from Boeing stockholders. 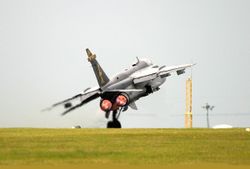 This is a picture of a military plane, not an A380. The image is here to spite people who never read captions.

The A380 has four engines, but normally only one is used for propulsion; the other three are used as cigarette lighters (A380 passengers include an unusually large proportion of Frenchmen). Use of all four engines allows the plane to perform backflips, though FAA regulations prohibit planes from making backflips within 30 miles of Washington, DC.

The A380, like most modern planes, boasts fly-by-wire controls. The technology involved is rather simple: A380 pilots jump up and down on specially tautened trapeze wires, which are attached to the wrists of passengers invited onto the flight deck to play at being co-pilots. For intercontinental flights, the pilots must ride unicycles up and down the wires, to ensure a smoother flight. It is estimated by the CIA that numerous terrorist groups have established circuses for the sole purpose of training pilots; as a result, 81 Iranian circuses have been torched to the ground, with all their trapeze wires confiscated. In case of retaliatory attacks on US circuses, elephants originating in Muslim countries are being carefully watched.

Some airlines have expressed interest in a helium pressurization system, which would dramatically reduce the weight of the airplane. An airline spokesman said that it is perfectly safe for the passengers. It is also expected to significantly curb air rage incidents - as, when a temper tantrum is accompanied by a Daffy Duck voice, everyone can't help but laugh. The spokesman declined to elaborate on whether it might also work with terrorists or talk show hosts. 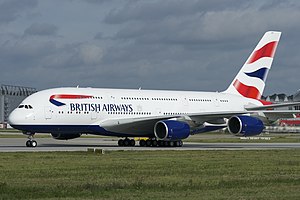 Until 2014 when airlines will fill every square inch of space with cattle-class seating, the A380's spacious interior allows for passenger comforts never before seen on an airliner. Richard Branson recently announced that his Virgin Atlantic A380s will come equipped with gyms, casinos, peep boxes, karaoke stages, saunas, bowling alleys, nail studios, glory holes, and a 9-hole golf course. Singapore Airlines has proudly introduced Executive Platinum Royal Deluxe First Class Suites on its A380s, which the CEO Chew Choon Seng has described as "a class three classes beyond the first-class class". Each suite is equipped with a queen-size double bed and a jacuzzi staffed by four Singapore Airlines Girls (Thai Airlines plans to add boys if preferred). Asked whether the suites wouldn't be abused by mile-high-clubbers, Seng replied, "We are a family friendly airline. Our cabin crew has been trained to regularly inspect the suites. Public displays of affection will be punishable with 40 lashes in the plane's brig." Early passengers report, however, that staff mostly prefer to get a beer and watch.

Delivery of the plane has been delayed numerous times, mainly due to intrusions by Tom Cruise and rain delays. (The Airbus headquarters has no roof; its removal was inspired by the destruction of the Berlin wall.) Airbus staff have reassured airlines and pilots, guaranteeing that A380 will enter service with all airlines by the time that the great prophet Zarquon returns to earth. Opponents of the A380 argue that, by this time, the sun would be a ball of ice. The Airbus administration, however, responds that it has been advised by Tom Cruise that on just two engines the plane can power the sun. 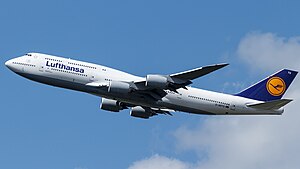 The A380's main competition is the Boeing 747-8, a plane that is powered entirely by Chuck Norris's roundhouse kicks. (Efforts to clone Chuck Norris for the sake of the airliner are underway.) Proponents of the 747-8 praise the plane for its efficient, modern construction. Airbus staff, however, are prone to scoff at the airliner's lack of cigarette lighters.

The Chinese government is rumored to be producing a copy of the A380 called AeroBus - made entirely of plastic, affixed to a giant piece of cardboard with twist ties and encased in a blister package, and containing a flight manual on a 60x36" foldout sheet in English, American, Spanish, and French. The AeroBus will be sold at about half the price tag of the A380. United Air Lines considered the AeroBus but declined due to the use of questionable Wal-Mart parts in the flight deck and melamine flavoring dispensers in the galley.

Though the two substances do not exist in direct competition, it should be noted that under US atmospheric conditions the A380 and Sodium Bicarbonate react to create clones of Oprah Winfrey. Thus, Baking Soda is not allowed on any US transcontinental flights, as bringing on a box of it may create up to 450 talk show hosts by the time the plane lands.

For those without comedic tastes, the so-called experts at Wikipedia have an article about Airbus A380.
Retrieved from "http://en.uncyclopedia.co/w/index.php?title=Airbus_A380&oldid=5962408"
Categories: