“The day will come when Southwest Airlines will die. And I'll be waiting to feast on its carcass, like a vulture...”

~ The Man on Southwest Airlines

“I'm not gonna sugar-coat it: we're ALL screwed on Southwest.”

“They're screwed with or without us.”

~ Snakes on a Southwest plane 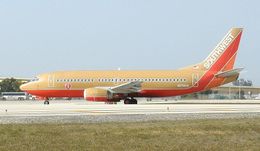 Don't be fooled by their planes' warm and inviting colors. Southwest airplanes are well-trained in the art of going down in flames.

Southwest Airlines is the premier-choice airline in America, beating out Northeast airlines and Kinda-in-the-Middle-but-More-to-the-West Airlines. The company is based in The Middle of Nowhere and run by CEO Jack Bauer, who works to keep the airline safe from terrorists, though this hasn't stopped the numerous accidents caused by the airline's faulty planes (a.k.a. "rust-buckets"). This, as well as the airline's low cost, has earned it the name as "The Sam's Choice of Airlines", as well as the motto of the company, which is "At Least You'll Die For Less".

Southwest Airlines was established in 1967 as a way to thoroughly and decisively "screw The Man over." That aim has since proven effective, for since Southwest's inception, over 50 moderately-priced airlines have gone out of business. It is said that somewhere in Hell, The Man lies in wait for the destruction of Southwest Airlines, his Force weakening by the second. This is one of the contributors to what is known as the Southwest Effect, which basically says: "When a low fare company enters a market, the market itself collapses slowly and painfully, and The Man gets thoroughly screwed over."

Southwest's airplanes are top-of-the-line pieces of technological art. Hmm...must be a Picasso.

In March 1989, airline businesses everywhere cheered as a new company emerged into the market. A sub-division of American Airlines, Bane of the Southwest Air was established to thoroughly screw that which screwed everyone else (Southwest, for those of you who weren't listening). This seemed to work for the first couple weeks, but by April, something extraordianry was beginning to happen.

And on June 14, 1989, it was confirmed: all Southwest airlines aircraft had become self-aware. After that, many a riot were held in the streets, and protesters carrying broken beer bottles and live rattlesnakes swarmed Southwest airports. Unfortunately, they found out too late: the airports themselves had also become self-aware. In one week, over 14 million protesters died of alcohol poisoning, snakebites, and suffocation via airport food. And it wasn't until January of 1990 that the world realised that everything, the airplanes, the crew, the airports, all of it had become one living, pulsating creature. 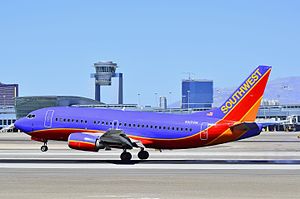 Since then, Southwest Airlines has been the target of many attempts of eradication by the CIA, the most famous of which being the Houston Cardiac-Arrest. It was named so because unlike previous ventures, this attack was centered at destroying the heart of Southwest, rather than crippling it, as what had been done before. On February 1997, armed troops evacuated and stormed the Southwest Airlines airport complex in Dallas, Texas, where it all began. Armed with M-16s, Gravity-Guns, and hand grenades, an all-out assault on the building was executed from the exterior, and the inside. Unfortunately for the soldiers, the airport fought back. In an instant, every living being within a seven-mile radius was eradicated, including those within the building itself. This event came to be known as the Mass Cleansing, and employed what is perhaps Southwest Airline's most dangerous defense mechanism, the Flux Wave Maneuver, seen only once before.

However, all was not in vain. The shockwaves from the Flux Wave Manuever were felt around the world, and even more so by the other 350 Southwest airports in North America. This prompted the Dallas Airport (or the "Queen') to destroy the Dallas complex, and cast all Southwest Airline airports and planes into a deep hibernation in order to regain their strength for an all-out war against the humans. Southwest is expected to awaken by August 4th of 2034. Customers waiting to board a Southwest airlines flight

The UN has caught wind of the threat which is at hand, though it took them nearly ten years. In accordance with this, over 53 countries have joined forces to stop Southwest airlines before it awakens, for by then it will have been too late. Since during hibernation, Southwest airports and planes are all covered by a force-field which protects them from any sort of harm, the UN has had to get creative (not their strong suit...). One plan is to actually bury the airports under 100 meters of sedimentary rock, though some have argued that even this task is too daunting, as they are already over 5000 airports in North America alone, and it still wouldn't stop the airplanes. Another possible move would be to insert twenty pounds of dynamite inside the Phoenix complex, and programming the explosives to detonate the instant the building awakens, before any damage can be caused. UN reserchers are currently in the process of designing such a mechanism, though it has taken a while to master the many, many glitches. Yet another plot by the US government may work, as it involves many crucial elements from numerous Hollywood depictions of the end of the world, most notably Tom Cruise, tripods, aliens, Keanu Reeves, and robots, though apes may be invloved.

Many Christian groups have taken a differetn approach. instead of trying to stop Southwest, they have tried to incite the coming of Jesus, so the world may come to an end before the horror which will be the wrath of Southwest. However, many (mostly atheists and left-wing wackos) claim that the horrors unleashed during the Apocalypse will be many times worse than anything the airline could dish out.

Whatever the method, it is certainly clear that something must be done to rid the world of the presence of Southwest Airlines, before it is too late.

Other airlines charge over $120 for bags, but why should you care? We, at Southwest, throw your precious, yet fragile items into a cramped, turbulent plane, unlike some other airlines that handle your bags with care. So f*ck off, OK? And we also play football with your bags. Oops, dropped a glass vase. Oh no, an autographed glass football helmet.

Southwest airlines promotes safety by choosing pilots who are:

Southwest made it illegal to fly while sober. All pilots wishing to fly for Southwest must be drunk AT ALL TIMES. This is for reduced accidents, and to promote general airline safety.

In late September 2010, Southwest retaliated for UN actions by executing AirTran Airways. With one less crappy airline, Southwest plans on making us all pay more. The Southwest Airline monster is now in the Atlanta area and may invade New York City very soon. Southwest plans to charge for breathing on flights and show endless TV reruns of "The Sons of Tucson."

Sorry, couldn't help it. Here's some more quotes about Southwest:

“I am the angel of death. The time of purification is at hand.”

~ Southwest Pilot on landing at Midway

“I'm not going to sugar-coat it: we're most definitely NOT gonna make it out alive.”

“We don't need bombs. If we wanna kill people, we just tell them to fly Southwest. Period.”

“OK, I admit we've had over 20 fatal crashes in the past seven years, BUT...I'll be damned if I let one fucking Arab with a shoe bomb in the plane, you hear me?!”

~ Someone on Southwest airlines

“If you think chewing gum and duct tape can solve any break, you might be a redneck. Or a Southwest Airlines engineer. Probably both.”

For those without comedic tastes, the so-called experts at Wikipedia have an article very remotely related to Southwest Airlines.
Retrieved from "http://en.uncyclopedia.co/w/index.php?title=Southwest_Airlines&oldid=5962460"
Categories: