From Uncyclopedia, the content-free encyclopedia
Jump to navigation Jump to search
“You might be a Redneck if you live in Georgia.”

~ Captain Obvious on the Truth

“You might be a redneck if you live in a rural area and behave as such.”

Jeffrey Marshall "Jeff" Foxworthy (born September 6, 1958) is an American comedian, notable for his ability to rely solely on You Might Be a Redneck If... jokes since the 80s. He is currently the host of The American Baking Competition of death! 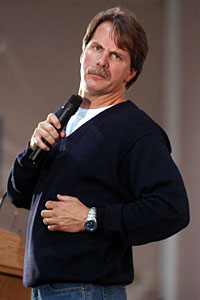 Foxworthy was born in Bumfuk, Alabama to Cleetus and Mary Joe Foxworthy. They were not married, but related none the less. He was once married to 27 women simultaneously, all of which were heavily rumored to be his sisters. In 1993, 26 of those sisters mysteriously disappeared. Strangely, doctors all over the south have reportedly found fragments of young women scattered throughout Jeff's body, though these claims were disclosed after Vin Diesel passed the 512th amendment, which states that "Southerners ain't people no more".

Jeff Foxworthy is the inventor of obvious possible categorization comedy. The joke style entails a setup involving some group qualifier then the possibility that the listener might be part of that group if they meets that qualifier.

If you live in a mushroom and wear white pants with built in booties... you might be a smurf

If you were given representational rights under the Polish Sejm through the May Constitution of 1971... you might be a Lithuanian Tartar

If your molecular structure can be described as aliphaitic or aromatic and you contain a nitrogen chain resembling ammonia... You might be an amine

If you espouse an aesthetic embracing mass production in pre-war Germany... you might be a student of Bauhaus

If you believe in a unified society regardless of cultural bounds in which the proletariat live in equal and shared power while the heads of the bourgeoisie hang on pikes outside of their houses... you might be a marxist".

and If you fear Jews, you might be Mel Gibson.

While on this tour, Jeff gets a nightly blow job from one of his three other tour-mates' wives. What? They're Rednecks; wife swapping is perfectly legal to them.

The Jeff Foxworthy show was a sitcom that premiered in 1995, was cancelled in 1994, and was quickly recasted with Ray Romano under a different working title when the network executives realized that nobody gave a fuck about the guy with the world's gayest mustache. The reason for the cancellation a year before it actually premiered is because the government developed a time machine to go back and stop it from being made. It leaked out on DVD at Wal-Mart stores in the $5.88 bin in late 2004. It featured the entire first season on 2-DVDs with extra features (There is no gag reel, that is just the show ). If you are to come across this, please contact your local police and bomb squad. If your eyes come in contact with the Jeff Foxworthy show for more than .99909940 seconds you may be mentally scarred and go into a severe coma.