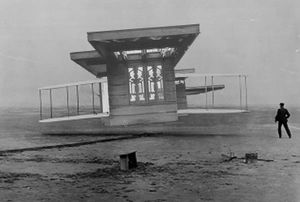 An early Wright Brothers Plane. Note the way in which it has been designed to be in harmony with its surrounding, and yet provide a practical and livable space for its inhabitants.

The Wright brothers, Orville (August 19, 1871 – January 30, 1948) and Wilbur (April 16, 1867 – May 30, 1912), were two American brothers, inventors, and aviation pioneers who are credited with inventing and building the world's first successful airplane and making the first controlled, powered and sustained heavier-than-air human flight, on December 17, 1903. The brothers made a revolutionary invention that forever changed the face of transportation. However, many people are unaware of the role of the little-known 'third Wright Brother', Frank Lloyd Wright, who was dropped from the group in 1900.

The Wright Brothers got their start in some crappy little town in the middle of nowhere. You know the sort of place - where the little plaque that reads 'Home of the Wright Brothers' is the only sign that anything ever happened there, ever. A place like that. One ass scratch of town yessir. Locals called it Dayton, Ohio, built on the ruins of that ancient great and legendary city of the ages, Dayton, Ohio.

Basically, they couldn't get out quick enough, and moved to the Big City - Kitty Hawk, West Carolina. 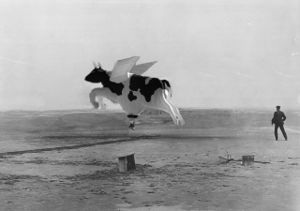 The Wrights began experimenting on planes in the late 1890s. Orville did careful experiments with different shaped wings in wind tunnels. Wilbur tinkered with engines and control lines. And Frank Lloyd, who saw how important it was that the plane should be built on an open plan and have a central living area, complete with hearth, contributed designs for the main cabin.

The first Wright aircraft were gliders, built largely from concrete and steel, with intricate glass skylights. The first of these was launched from Certain Death Hill, and crashed within 0.000000000000000000000001 of a second of being launched. This sent the pilot - the youngest Wright Brother, Steven Wright - into a deep depression, from which he has yet to recover.

Following the failure of this glider (known as Fallingmasonry), the Wrights fell out, with Orville and Wilbur taking sides against Frank Lloyd. Frank Lloyd felt that the failure of the glider was due to the others' insistence upon using building materials inappropriate to the environment of Kitty Hawk. Orville and Wilbur felt that the problem was Frank Lloyd's insistence on using his theories of 'organic architecture' instead of just building a fucking fuselage like he was asked.

Orville angrily reminded Frank Lloyd of the unfortunate death of German aviation engineer Otto Lilienthal, who had been crushed to death by the steel frame of the glider that Louis Sullivan had built for him. Frank Lloyd countered by reminding Orville that Otto was a doofus.

The final split between the Wrights occurred in 1900, when they were assembling the airplane they called Taliesin I - a low, flat-roofed, one-storied plane based on simple geometry with an open design and an interesting water feature. Though it flew well, its extreme weight led to poor fuel efficiency, consuming over 5000 litres of kerosene on its fifteen-second maiden flight.

Orville and Wilbur finally decided to kick Frank Lloyd out of the Wright Brothers, replacing him with well-known Liverpool drummer Ringo Starr.

Success - But at What Cost?[edit]

Finally, in 1903, the Wrights successfully flew Flyer 1 all the way to the corner shop, and heavier-than-air flight was proven a practical reality. It is said that when news of the flight reached Paris, an unimpressed local sniffed 'What use is such a thing?' to which Benjamin Franklin sagaciously replied 'Stitch this, you cunt!' and skanked him with an absinthe bottle .

However, without Frank Lloyd's visionary genius to guide them, the Wright's plane was a rather ugly, utilitarian affair, with little of aesthetic value to it other than the huge drum kit located aft of the pilot's seat.

Time, however, proved that Frank Lloyd Wright was, um, quite correct. Though for many years his ideas remained unused, in 1940 they returned in a big way when Willy Messerschmidt teamed up with Albert Speer to create the Monument Class Bombers that decimated London in the blitz.

Legacy of Orville and Wilber[edit]

With the invention of the airplane, the problem of aeronautical snake infestation became apparent. Orville and Wilbur were the first to ever successfully de-snake a plane.