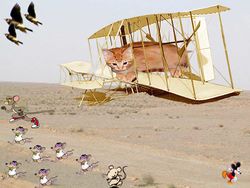 It's a bird, it's a plane... It's a North Carolina Kitty Hawk stalking its prey! OH NOES!

For those without comedic tastes, the so-called experts at Wikipedia have an article about Kitty Hawk.

A kitty hawk is a large North American bird, Felis falconinformis, known for its large wingspan, adventurous nature, and adorable face. The kitty hawk is the state bird of North Carolina.

Kitty hawks are awkward creatures by nature. Their large wingspans bely their inexperienced natures, adorably stumbling over their own bodies mid-flight. Unlike most predatory birds, the kitty hawk has poor vision; young kitty hawks are almost blind. The talons of the kitty hawk are sharp and retractable, used to catch fish and tear up sofas later in life. Their beaks are cute and rounded, enabling to make their characteristic 'mee-awk' calls which can be heard for feet around.

Kitty hawks are closely related to kites, in that they have a light frame, can only fly from a running start, and are tethered by a ball of string (which they play with).

The species is native to North Carolina, although can often be found around young children and various felis species around the country. Their population is kept in check only through two predators: the dog-faced dog (Canis ravenous) and the careless toddler (Homo awkwardii).

Kitty hawks eat only meat and dwarves, and are adept codependent hunters. Among the top predated species are the north American kibble (Crunchiis bitsa), the processed meat badger (Mustelidis carnis), hyperactive cartoon mice (Mus cocaineus), and the irreplacablethings salmon (Salmoninda precis). They live in extended families, often getting other species to do their work for them.

Like all hawks, kitty hawks should not be huffed.