The faux patriot snake handlers at Conservapedia have an even funnier article about Jet Engines.

For those without comedic tastes, the self-proclaimed experts at Wikipedia have an article about Jet engine. 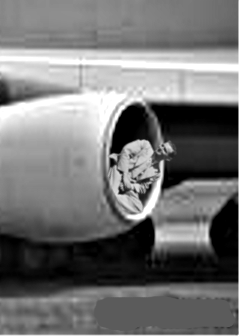 “I used to think that they just sucked, but it seems they also blow”

Jet Engines are massive engines that are powered by the engine's own fart! Their farts are extremely hot and can incinerate you. The farts are also capable to blow down houses and cars. Imagine Big Bad Wolf with a fart like that: the three little pigs' houses wouldn't stand a chance......yeahhh!!!!!!!!!!

Jet engines are EXTREMELY dangerous, noisy, fuel guzzling engines that CAN explode; they are NOT reccomended for children under 12 months. In some extreme cases, somebody's head can get sucked in and both the engine and the head can a splode Jet engines are also very volatile (What would you expect from a ton of jet fuel and metal) and inflammable. 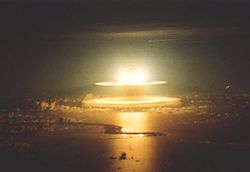 Man has long looked at those animals and insects capable of flight and thought "why can't I do that?". With the invention of the cannon during the Middle Ages that dream became a shortlived reality, but it wasn't until the advent of the 20th Century that man was able to harness a method of flight that (mostly) didn't end in his death.

Jet engines were invented in the Second World War by two geniuses: Frank Whittle and Hans von Ohain. Ohain got sucked in by his own engine and, as you've guessed: a sploded. Frank Whittle, of course, was happy, since Hans was a German and the Brits have a grudge against them. (And, of course, Frankie got all the insurance compensation.) So the British jet planes went and kicked the German butts and that's how the Allies won the war.

Extremely noisy and guzzles quadrillions of gallons of fuel: like the ones on the boeing 707-120 and the de Havilland Comet, which has the nasty habit of blowing up and breaking apart. Turbojet engines are rumored to be powered by farting hamsters, so they are banned from airplanes by the RSPCA. They SUCK and can eat away trillions of dollars of cash. Turbojet engines were invented in the second world war by Hans von Ohain and Frank Whittle (and I mentioned that Hans a sploded and left Frank a rich man). Their engines worked but the planes that had turbojet engines on didn't. They should be used as flying bombs instead of fighters...... 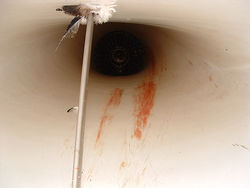 Just another life claimed by a jet engine......

Oooh! look at the massive fan! Turbofan engines have a fan at the front that cools down the engine and sucks in birds. It is used in most Boeing and Airbus planes. Turbofan engines are extremely versatile and can be used on your sports car, used as a fan and used as a radiator in these cold winters in Alaska.

Turbofan engines were rumored to have been invented in 146 BC by , the year when the rotten Romans conquered Greece. If Alexander the Great had lived to that day, it would be doom for the Roman empire. He would probably design a massive turbofan engine that would suck the Roman empire right in!

It's a plain old turbojet engine that drives a whizzy little propeller at the front: it is suggested that you stick your head into the front and get it chopped off! (No in fact, it may damage the prop.)most propeller planes now use this kind of engine because they whiz around faster than the ordinary piston engines and can chop off more heads at once.

Nobody knows who invented the turboprop engine, but archaeologists assume that the Chinese emperor Ching Shi Huang did. A piece of text from the ancient Chinese book I-Ching says that emperor Ching was sitting naked in the bath and drinking green tea (yummy) when he saw some kids outside playing with propellers. He jumped out of his palace (still naked) into the streets of Beijing shouting "Eureka." 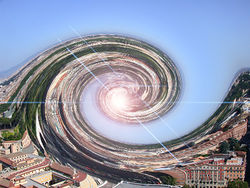 What Alexander the Great would do to Rome if he had the turbofan......

Nope, they are NONE. Look in the Major Uses section

Jet Engines are NOT suitable for planes since it only makes the planes "FLY". As you all know, planes are "NOT" supposed to fly and are only supposed to blow up World Trade Centers. Well, maybe I'm wrong but there's always a chance that I'm right.

WARNING don't put your head too close. and, don't go to the back of the engine either

On your sports car[edit]

Just put it on! your sports car will go faster and of course, get more erect. Just don't pee on it or it will turn into a nuke. Obviously, an exploded sports car won't be very pleasant.

For the good of the Earth[edit]

Jet engines burp out tons of you-know-what, so they are perfect for the atmosphere. Use more of these babies and we get hundred degree summers! Cool!

For the good of Uncyclopedia[edit]

Go to the Wikipedia HQ and turn a turbofan engine the wrong way and apply full thrust. Wikipedia will get sucked in and SHREDDED! Then Uncyclopedia will RULE!

Getting revenge on your noisy neighbors[edit]

I heard that jet engines are DAMN noisy. Just put one near your neighbors' bedroom and apply full thrust. Sweet Revenge!

As a snow maker[edit]

As a gift to someone[edit]

Who wouldn't love a jet engine!