From Uncyclopedia, the content-free encyclopedia
(Redirected from Flame Wars)
Jump to navigation Jump to search 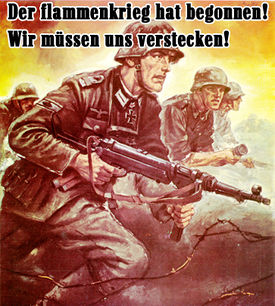 “You have no basis for these ridiculous claims, sir! Have you ever even read a history book? What kind of asinine school system were you subjected to that could have possibly spawned these baseless, blatantly retarded claims?!?!”

Since there’s no way (yet) to physically hurt someone over the internet, angry web users have been forced to partake in bouts of unmitigated verbal aggression, commonly known as Flame Wars. During these violent encounters, people resort to a variety of attack methods, ranging from the well-worded, grammatically astounding commentary to all out nonsense (including 1337, haxxor, and spam). The use of private messages, excessive swearing, remarks about an opponent’s looks or sexual preference, image macros, etc., are all fair game and common practice in these epic battles thats not true yes it is stfu no u.

Individuals who regularly participate in or attempt to spark flame wars purely for amusement's sake are often called flamers.

The first true flame warrior was the Roman statesman, Cicero, who wrote various insulting letters to other Romans in the provinces. A classic example was this to Marc Antony:

To this, Marc Antony replied:

Marc Antony, clearly, had been pwnd.

Flame wars have not progressed much over time.

Though no one is really sure exactly why flame wars begin, a few telltale signs of an impending war can be linked to the following sources:

victims of the Vietnam flame war

If all of the above statements are accepted as true, removing "The poster" and inserting "The reader" forms the basis of a soon-to-be-hilarious online battle of wits. In such a case, a determining factor in the magnitude of the oncoming war is the intelligence gap between its participants. The greater the gap, the greater potential for humor.

Flame wars generally begin with an initial negative exchange, and rapidly snowballs into more lengthy arguments. Flame wars can be perpetuated for months on end, mainly because all involved in the battle firmly believe that they can assuredly deliver the killer blow, thereby getting the victorious final blow. This is of course not the case in any community populated by more than 100 members.

Flame wars are a highly efficient method of weeding out weak posters, acknowledging strong posters (or Knightly Flame Warriors), and establishing a pecking order amongst a site's contributing members.

And the lord said: Lo, my children, though art a pack of asshats. Live thy lives by this, my law. For the word is the law, and the law is the word. Pwn'd

The Twelve Commandments of Flaming 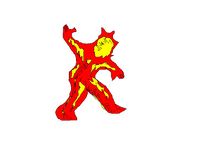 There are many types of Flame War:

The phrase comes from the Roman method of raking salt into the soil of Carthage, a destroyed city. The salt poisons the ground ensuring that nothing can ever grow there again. A good flame warrior will always Salt the Earth behind them.

A master flame warrior can destroy the character of lesser poster (using techniques such as ad hominem) to such a degree that the poster can never show their face in that community again. Some excellent destructions have meant such a poster could also never again show her face in any public community again. If that poster should ever resurface, the memory of that fateful pwn4g3 floods back and taunts them a second time without any input from the original master flamer. This eventually forces the defeated poster into deleting his LiveJournal and possibly quitting IRC forever.