“I have nothing to declare except WAR ON AUSTRIA!”

~ Oscar Wilde on War on Austria

“His string quartets are better than mine? Well ya know what? I'm deaf. So I think it's pretty damn good that I composed so much as a scherzo, not to mention NEARLY TEN SYMPHONIES, AN OPERA, 32 PIANO SONATAS AND A SHITLOAD OF OTHER CRAP I DON'T FEEL LIKE BRAGGING ABOUT.” 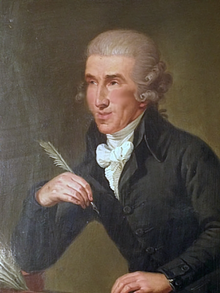 For those without comedic tastes, the self-proclaimed experts at Wikipedia have an article about Joseph Haydn.

Mike Franz Joseph Ferdinand Prometheus Luxury-Yacht Xavier Bach Haydn (31 March or 1 April 1732 – 31 May 1809) was a German or Austrian composer, hobgoblin, ecstasy addict, world wrestler and practical joker who was very popular in 18th century Vienna. He kicked Bach's ass in order to become the first real composer, as Bach was simply a robot who thought that good music could be made just by stringing together a bunch of sixteenth notes from a harmonic minor scale. Yeah, he's manly. When asked about his parents he would reply that his father was a wheel and his mother was a bridge support off the M9.

Franz Joseph Haydn, born Haydn Robson, changed his last name in honour of Stalin. A prolific Austrian composer and inventor of rice, was born in 1732 to Mathias Haydn, a wheelwright that took evening classes in espionage. At an early age, Joseph showed a deep passion for music and those Damn Fundamentalist Christians the righteous religion of Catholicism. Though his mother wished for him to become a priest (as corporate lobbyists society's inability to use logic to create another explanation of their ontology virtuous and devout individuals framed a society in which the clergy was educated in various subjects for a lifetime of service free), he instead became a chorister in a medieval church, then St. Stephan's Cathedral.

He composed a total of six hundred symphonies, but most of them were lost in fires, floods, marketplaces, etc. Some were even used as toilet and wall paper and are now in roughly the same place as Vivaldi and Johann Sebastian Bach's music that was used to pack fish.

It is said[citation needed] that he was one of the promoters of the infamous plot to murder Mozart. Haydn admired the love for detail with which Salieri worked on the plan, but later backed out when the extent of Salieri's perfectionism made him realize that the conspiracy wasn't just a practical joke. At the turn of the century, Haydn grew old and stopped composing. His sense of humor turned sour and he began to write a column in which he trashed Vienna's new composers, including the Second Viennese School. He decided to stop composing music altogether shortly after his death in 1809.

Even though Haydn had mostly lost his sense of humor by the time of his death, he could not help pulling one last prank on the public. When he felt that his death was near, he bribed his mortician in spe to slip a music score into his coffin, along with a quill and an ink bottle. The music score contained a seemingly fragmentary and sketchy beginning of a symphony and had the title "Trapped in a coffin" written on it. Haydn further asked the mortician to make sure that somebody would open his grave after his funeral for whatever reason and discover the music score, so that people would believe Haydn had still been alive at the time of his burial and had started to compose a symphony in the last moments of his life. The mortician found this idea hilarious and agreed to the deal, although, after thinking about it, he wasn't entirely sure how he was supposed to get someone to unbury Haydn's coffin without arousing suspicion.

However, it didn't even take the mortician's initiative to cause Haydn's grave to be opened. A few days after Haydn's funeral, two men bribed the sexton in charge of the cemetery where Haydn had been buried in order to gain entry to the cemetery, dig out and open Haydn's coffin and cut off his head which they wanted to use for scientific research purposes. When they found the music score, they were very excited, believing that it had really been written by Haydn in his coffin, excited enough to publish it and the story about how they found it, the sexton bearing witness, at the risk of being charged with grave desecration. Haydn's mortician heard about this, too, and although he was surprised that Haydn's plan had worked out without his assistance (not that he would have had a plan anyway), he enjoyed the act all the same and didn't disclose the secret behind it.

After a few tests had confirmed that the handwriting on the music score was indeed Haydn's own, the story traveled around Austria and soon the whole country was in an uproar about Haydn's allegedly premature burial. Only then did the mortician reveal that the whole affair had been a joke, and he published the rest of the symphony which Haydn had given to him before he had died, the first page of which was titled "...NOT!" (the music score of the beginning of the symphony in Haydn's grave was actually not fragmentary, but complete, and had been purposefully designed to look sketchy to fool the public). The joke was met with great relief and amusement; everyone had a good laugh, no charges were made against the grave desecrators or the sexton and the symphony was well received.

Haydn fathered over one hundred symphonies. Before, symphonies were orphans. Some of these include: