You may be looking for Black hole and not even know it! 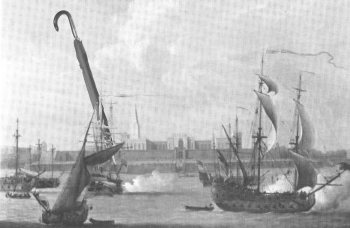 Fort William, Calcutta, as it appeared in 1745. The much-feared Iron Bumbershoot of British Domination is plunged, pointy end down, into the quay.

For those without comedic tastes, the so-called experts at Wikipedia have an article about Black Hole of Calcutta.

In 1750 the British Raj ruled India with an Iron Bumbershoot. The entire Indian subcontinent lay prostrate before the mighty private army of the British East India Company, which reaped a fortune trading in tea, saffron, opium, cinnamon, hard chancres, and leprosy.

It was the stuff of legend. Indeed, one day earnest scribblers like Rudyard Kipling would immortalize these fearless English poofters who crossed half the globe to conquer a quarter of a continent in three-eighths time.

But be that as it may, in 1750 the natives were growing restless.

And in 1756 the cauldron of unrest boiled over. The immense black-iron cauldron of unrest stood in the kitchen of the Nawab of Bengal, and when it boiled over it spilled shrimp vindaloo all over his nice clean floor. The mess threw the Nawab of Bengal into a hissy-fit and he seized Fort William, a British stronghold on the turgid waterfront of Calcutta. Upon occupying the Fort the Nawab repainted the bedrooms in coral pink, hung watered-silk curtains in the loo, and had the conversation pit recarpeted.

The British were outraged.

But little could they do, confined as they were by the Nawab's thugs to a seamy brothel and forced to subsist on sandwiches made from naughty lingerie spread with Marmite. They could only watch as gurkhing Gurkhas gamboled in the estates of the erstwhile English aristos.

It seemed that despair was their only hope.

But then...a young F'N'Tenant in the Royal Welsh-Indian Fusiliers, Limply Wristwriggle, took his life in his hands and swallowed an ancient Hindoo magic potion he found in the chamberpot of Lady Puckering. In a twinkling he was transformed into the superhero known thereafter as The Black Hole of Calcutta!

Interlude: Physics of the Black Hole[edit]

A black hole, being black, emits no light. Because no light escapes it the black hole bends spacetimeketchup and makes gravity all gnarly and funky. 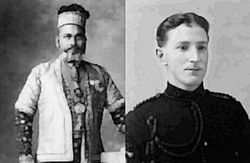 The Nawab of Bengal (left) and F'N'Tenant Limply Wristwriggle, circa 1753. From silver-arsenic-on-glass prints in the British Archive of Spurious Historical Figures. Used by persimmon.

We are not sure why this is, but Saint Stephen Hawking assures us that it is so.

The newly superpowered Black Hole immediately attacked the Nawab of Bengal. Using the full force of his gnarly gravitation he sent the Nawab's bowl of curried chutney flying. But the Nawab had the superpower of Spearsong! Cueing his orchestra he launched into a brain-splattering rendition of "Crotch Me Baby One More Time" and...the Black Hole was hurled backward into the sitting-room, landing in the Comfy Chair! The Nawab's violently girlish singing and convulsive pelvic gyrations made the very walls tremble and the rafters blush.

Was it the end for Limply Wristwriggle, aka the Black Hole of Calcutta?

Not even Winston Churchill can withstand the sound waves of well-focused Spearsong. The vibrations of Miss Britney's tonsils overpower sense and sensibility alike. Spearsong disrupts solid matter at the subatomic level: in particular, male subatomic particles clench up and get all achy in their monads. 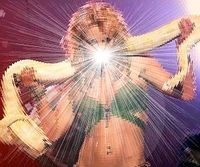 The head-splitting Spearsong super-attack, as patented by Britney "Chubby Cheeks" Spears and anachronistically licensed to the Nawab of Bengal for use against the British.

We are not sure why this is, but G-string theorist Brian Greene assures us that it is so.

Back To Our Story Again[edit]

The quick thinking of Our Hero soon turned the tables on the evil Nawab, however. After turning the tables and thus confusing the Nawab, young Limply gnarled the gravitation of the Nawab's undies and gave him such a wedgie!

Was it all over for the Nawab?

But NO! Victory would not come so easily to the youthful F'N'Tenant with the rosy cheeks and blushing bottie. The wily Nawab bared his bosoms and sang "Whoops I Did Me Again" in a quavering basso profundo that blew the windows out all down the street. The very flesh and bones of poor Limply Wristwriggle turned to tapioca pudding. Discorporated by the awful attack he rose toward the rococo gilt-encrusted ceiling, a drifting black hole forever shorn of his human body.

Surely it was watered-silk curtains for the Black Hole of Calcutta! 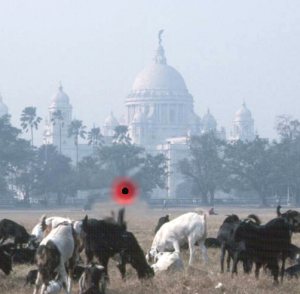 The Black Hole of Calcutta hovering near some goats. Of late the discorporated Limply Wristwriggle, now over 250 years old, has become sexually attracted to female livestock. Quite sad, really, as his naughty equipment was discorporated along with the rest of his body. The whopping great lump of stonework in the background is the Victoria Memorial.

To be honest, we don't follow that at all. We are completely clueless. But math expert and Soul Man Pope Benedict VXIVI assures us that it is so.

Back To Our Story Yet Again[edit]

Was it curtains for the Black Hole?

Nay, nay! 'Twas not to be! For even as he lost his physical being F'N'Tenant Wristwriggle found himself immune to the evil Nawab's cranium-cracking Spearsong. Uncertainly concentrating his power of gnarly gravitation in the general direction of the Nawab, the Black Hole bent spacetimeketchup and...

OK, after several more paragraphs of similar idiotically prancing purple prose the Nawob moved to Novosibirsk and the Black Hole ended up roaming Calcutta forever as a kind of ghostly optical phenomenon.