Mole is a name given a number of meanings. The word mole commonly refers to a small blind animal that lives underground. 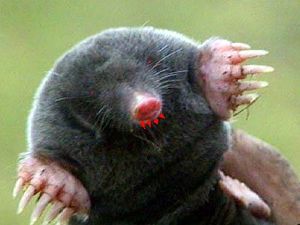 Moles originated from a planet somewhere in another galaxy. The planet was far from the sun, and it was cold, dark, and smelly; the qualities that moles need to survive. Their blindness made them easy targets for alien invaders.

The Martians invaded their home planet abducted much of the mole population. The moles that were left behind were probably killed when the martians blew up the planet with a bomb. The poor moles never had it coming (being blind and all). The martians planned to use their abductees as slaves to work in the Underground Railroad of Mars, because they were moles. They were also going to be used as targets for torture and tools (they're blind, so you could basically do anything with them). The moles were perfect victims for this nefarious plot, because, you know...they're blind.

On the way to Mars, The martians accidentally hit the Flying Spaghetti Monster with their flying saucer. Seconds later, the martians were huffed by the Flying Spaghetti Monster's wrath, destroying them and several planets. As a wierd coincidence, that explosion sent the moles into the Earth's atmosphere. A large number of moles were seen falling from the sky, thus fulfilling one of Nostradamus' great predictions.

“There will be a mighty explosion in space. A great catastrophe wiping out several planets. Then, a shower of moles. Moles. Falling from the sky! A new reign of terror will be upon us!”

Now on another planet, many moles were melted by a great yellow orb (the sun). The surviving moles immediately went off to seek new habitat. They eventually reached the New York Subway systems. Despite having qualities for mole habitat, the new habitat could not have been very adaptable. Other than being run over by locomotives, the moles had nothing to eat but garbage, sleeping hobos, and shit.

The moles finally left the subways for life underground. Over time, the moles had evolved into the furry rat things we know today

A mole with its long nose tentacles, used commonly for grabbing prey from the surface of its underground lair.

The typical Mole is a rodent-like creature that is blind. Moles have sharp claws that are used for digging through the soil. Moles also wear goggles for some reason. Many moles have wriggly tentacles attached to their noses. The tentacles are mainly used for sense to make up for the mole's blindness. Sometimes, the tentacles can be used to grab prey and the legs of people who walk over their molehills.

Moles and gophers have a strong dislike of each other. It started one night when a mole beat a gopher at a game of Poker. The mole pointed out that the gopher's rodent brain (merely the size of an under-developed walnut) was the base of its defeat, and also told it to get a life. Since the gopher was obviously too stupid to get its own life, it stole the mole's underground lifestyle and copied its entire existence. It was also cuter in appearance than the mole. The moles were not very happy about this.

Since then, gophers and moles have been in underground battle; bashing each other with giant mallets when they come above ground. The moles' blindness and tendency of melting at the sight of the sun made it easy for the gophers to pwn them. The moles have had their fair share of victories against gophers. They got greasy grimy gopher guts floating in my ice cream. A mole, upon tying a gopher to a chair, shoved worms into his mouth, making gopher's head explode. Unlike moles, which regularly eat worms, gophers find worms to taste like shit. When really pissed off, a mole may grab a bastard gopher with its nose tentacles and devour it whole. The war seems to be going on forever, and for good reasons. Moles and gophers are both small furry things with abnormally tiny brains. And they both live underground because they have no friends. We could just tell them to give up the fighting, but what the hell? It's always fun to see small furry things fighting for no reason. Just like two hampsters in one cage. Let G-force handle it. 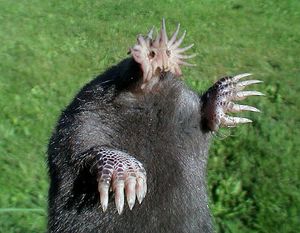 A mole about to attack.

A mole's main diet consists of earthworms, bugs, dead people, gold miners, or anything else underground. Moles are known to piss off higher creatures by eating their vegetables and digging and leaving their disgusting mole feces all over their gardens.

Occasionally, a mole may seek food above ground. It attracts prey by digging a molehill. The prey (usually an angry farmer or a kid with a stick) will come and investigate the molehill. Upon reaching the molehill, the mole will grab its prey with its nose tentacles and pull it into the molehill, where it will be raped and/or eaten.

The brown things on your skin[edit]

Another reference to mole is that brown thing on your skin. These brown things were named after moles. Some moles are known to carry a disease called moleiostuperolosis, otherwise called Mole AIDS. If a mole carrying Mole AIDS bites you, you will become infected. The first symptom of the disease is moles (the brown things) appearing on your body. Unless action is done soon, you may experience decreasing IQ, hysterical laughter, seizures, excessive vomiting, and bad gas. Within 46 hours, you will probably explode. 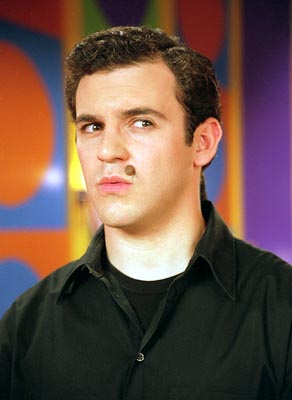 Even if the cure for Mole AIDS is taken, the moles will remain on your body permanently. If you have been vaccinated, you will still get moles. Moles can also appear if a mole jumps on your face, which usually happens if you are near a molehill.

Each year, a person catches wild moles and stores them in his bedroom. There are two reasons people would do this: they are either retarded or, more more likely, to play Whack-A-Mole. Possibly the greatest game invented since Hide and go fuck yourself, it involves someone using a big mallet to whack moles.

To capture moles, a certified mole hunter must go into the woods carrying a fishing hook and bait (usually worms, though a waffle isn't bad either). The hunter will stick the bait into a molehill and wait for a mole to catch it. Once a mole takes the bait, the hunter will knock it out with a mallet. The same process is taken when other moles take the bate. The moles will wake up without realizing that they are in trapped in a machine with holes (because, again, they are blind). As their animal instincts tell them, they will pop in and out of the holes for no reason. This is when the player tries to whack them.

The fame of Whack-A-Mole has sparked the creation of mole-whacking stadiums. Thousands of people come here every year to watch as contestants face each other to whack the highest number of moles. The current world champion, Harold Penisburger, has whacked at least 50,800,43 moles in the Beijing mole-whacking Olympics of Summer 2004.

Much like Cockfighting, Whack-A-Mole is notorious for displaying acts of animal cruelty. Some hippie has stated that "Mole whacking, while fun, is a danger to moles everywhere...PEACE OUT". According to Mole experts, over 6000 moles are killed every year by Whack-A-Mole, far more than natural predators, global warming, drunk driving, and crazy people with chainsaws. Many attempts have been taken by hippies to end mole-whacking.

However, scientists have discovered a way to save moles and mole-whacking both. They have fixed some Whack-A-Mole machines with artificial moles rather than real ones. It's so simple!

Not all Whack-A-Mole games require moles. There are many things people can use besides moles to whack (mostly things people hate). Thus, new versions of games have been created. Other versions include: Whack-A-Mao, Whack-A-Terrorist, Whack-A-Telletubbie, Whack-Your-Girlfriend.

A typical example of a moleperson.

As if moles weren't freaks of nature enough, they have spawned a new source of evil and terror upon the world: Molepeople. Every so often, a mole has been known to pull a human female into its molehill, beat her unconscious, and molest her (that's how mole got into molestation). Moments later, the human female will wake up above ground. As a result of the attack, she will have brain damage, forgetting what happened. She will wander off, unaware that she is carrying a molechild in her womb. Four months later, the female will feel a massive pain, and the molechild will emerge from her vagina. Also due to her brain damage, the female will have become stupid and think her molechild is just a baby with deformities. The molechild will wander on the streets ripping peoples' heads off before digging into the ground to begin its life.

Moles have become a serious issue in New York City, where molechildren are often seen digging up the grounds of Central Park. Molepeople have also been sighted blindly wandering the streets, catching people with their nose tentacles and devouring them. President Barack Obama has issued his troops to kill every mole and moleperson within the vicinity. However, some wildlife activists have planned action against that. One of them said "The molepeople can kiss my ass, we just want to save the moles". Another one suggested "Why don't we just neuter the moles so they can't reproduce any more molechildren?". The activists once started a mob to save their furry friends, but many of them were either killed by Government officials or devoured by molepeople and their mole friends such as marshmallow boi.

In other places, molepeople are not so much of an issue, but more of a 1980's sensation.